Born in Mimico Ontario in 1910, David Ernest Hornell was destined for valour.  His citation, awarded posthumously reads as follows:

Flight-Lieutenant David Hornell was captain and first pilot of a twin-engined amphibian aircraft engaged on an anti-submarine patrol in northern waters. The patrol had lasted for some hours when a fully-surfaced U-boat was sighted, travelling at high-speed on the port beam. Flight-Lieutenant Hornell at once turned to the attack. The U-boat altered course. The plane had been seen and there could be no surprise. The U-boat opened up with anti-aircraft fire which became increasingly fierce and accurate. 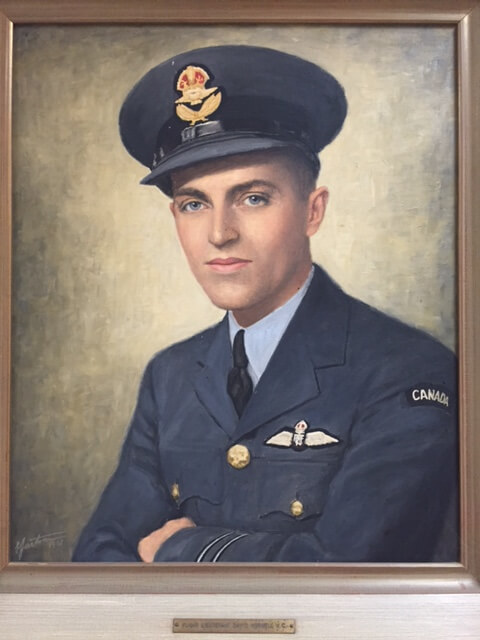 At a range of 1,200 yards, the front guns of the aircraft replied; then its starboard gun jammed, leaving only one gun effective. Hits were obtained on and around the conning-tower of the U-boat but the aircraft itself was hit, two large holes appearing in the starboard wing.

Ignoring the enemy’s fire, Flight-Lieutenant Hornell carefully maneuvered for the attack. Oil was pouring from his starboard engine which was, by this time, on fire, as was the starboard wing; and the petrol tanks were endangered. Meanwhile, the aircraft was hit again and again by the U-boat’s guns. Holed in many places, it was vibrating violently and very difficult to control.

Nevertheless, the captain decided to press home his attack, knowing that with every moment the chances of escape for him and his gallant crew would grow more slender. He brought his aircraft down very low and released his depth charges in a perfect straddle. The bows of the U-boat were lifted out of the water; it sank and the crew were seen in the sea.

Flight-Lieutenant Hornell contrived, by superhuman efforts at the controls, to gain a little height. The fire in the starboard wing had grown more intense and the vibration had increased. Then the burning engine fell off. The plight of the aircraft and crew was now desperate. With the utmost coolness the captain took his aircraft into the wind and, despite manifold dangers, brought it safely down on the heavy swell. Badly damaged and blazing furiously, the aircraft rapidly settled.

After ordeal by fire came ordeal by water. There was only one serviceable dinghy and this could not hold all the crew. So they took turns in the water, holding on to the sides. Once, the dinghy capsized in the rough seas and was righted only with great difficulty. Two of the crew succumbed from exposure.

An airborne lifeboat was dropped to them but fell some 500 yards down wind. The men struggled vainly to reach it and Flight-Lieutenant Hornell, who throughout had encouraged them by his cheerfulness and inspiring leadership, proposed to swim to it, though he was nearly exhausted. He was with difficulty restrained. The survivors were finally rescued after they had been in the water for 21 hours. By this time Flight-Lieutenant Hornell was blinded and completely exhausted. He died shortly after being picked up.

Flight-Lieutenant Hornell had completed 60 operational missions, involving 600 hours’ flying. He well knew the danger and difficulties attending attacks on submarines. By pressing home a skillful and successful attack against fierce opposition, with his aircraft in a precarious position, and by fortifying and encouraging his comrades in the later ordeal, this officer displayed valour and devotion to duty of the highest order.’

There is a school in Toronto on Victoria Street named after David Hornell and below is a picture of the Ontario Heritage Trust Plaque. 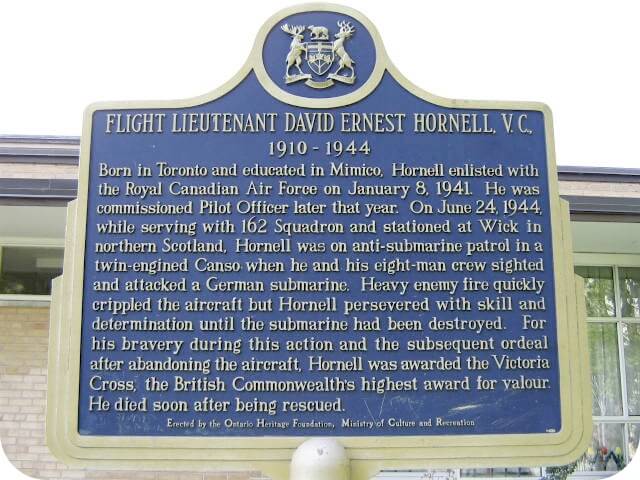 This is what is on the plaque:

Born in Toronto and educated in Mimico, Hornell enlisted with the Royal Canadian Air Force on January 8, 1941. He was commissioned Pilot Officer late that year. On June 24, 1944, while serving with 162 Squadron and stationed at Wick in northern Scotland, Hornell was on anti-submarine patrol in a twin-engined Canso when he and his eight-man crew sighted and attacked a German submarine. Heavy enemy fire quickly crippled the aircraft but Hornell persevered with skill and determination until the submarine had been destroyed. For his bravery during this action and the later ordeal after abandoning the aircraft, Hornell was awarded the Victoria Cross, the British Commonwealth’s highest award for valour. He died soon after being rescued.