For most conspicuous bravery an leadership when in charge of a section attack. His section had the difficult task of mopping up cellars, craters and machine gun emplacements. Under his able direction all resistance was overcome successfully, and heavy casualties inflicted upon the enemy. In one cellar he himself bayoneted three enemy and attacked single-handed seven others in a crater, killing them all. 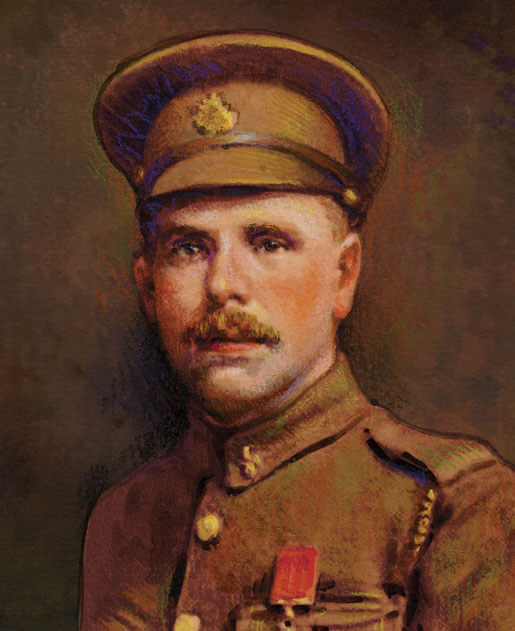 This non commissioned officer killed at least sixteen of the enemy, during the two days of actual fighting, and carried on continuously until severely wounded.

Cpl Konowal signed up with the 77th Battalion in 1915. Within a few months he was in France and sent to reinforce the 47th (British Columbia) Battalion.

After being hospitalized in England, Konowal was assigned as an assistant to the military attache of the Russian Embassy in London. He was later transferred to the 1st Canadian Reserve Battalion, served with the Canadian Forestry Corps and eventually with the Canadian Siberian Expeditionary Force. He returned to Vancouver, British Columbia on 20 June 1919.

Honorably discharged, Konowal was plagued by medical and other problems, which were thought to be a result of his war wounds. In 1928, he began to rebuild his life. Then living in Ottawa, he was befriended by another Victoria Cross winner, Maj Milton Fowler Gregg, who was a company commander with the Foot Guards. Maj Gregg convinced the Regiment to hire Konowal, and also secured a job for him as a junior caretaker in the House of Commons. Prime Minister William Lyon MacKenzie King spotted Konowal washing the floors of the Parliament Buildings and had him reassigned to Room No. 16, the Prime Minister’s Office (now the Speaker’s Reception Room).

In 1956 the Ottawa Citizen, interviewed Sgt Konowal, and when asked about being a janitor he replied, “I mopped up overseas with a rifle, and here I must mop up with a mop.” He also revealed that the real reason of how he won the Victoria Cross which was not part of the official record:

“I was so fed up standing in the trench with water to my waist that I said the hell with it and started after the German army. My Captain tried to shoot me because he figured I was deserting.”

Konowal died in Ottawa on 3 June 1959 and was buried in Notre Dame Cemetery on Ottawa’s Montreal Road with his name misspelled and his heroic actions forgotten. On 15 July 1996, the war hero was honored with a new headstone, bearing a carved replica of the Victoria Cross and his name correctly spelled. On the same day, a commemorative bronze plaque was unveiled at Cartier Square Drill Hall, with the inscriptions in Ukrainian, English, and French. The honourable David Collenette, Minister of National Defence, delivered the keynote speech with the Governor General’s Foot Guards and the Band of the Ceremonial Guard providing a Guard of Honour. Konowal was also honoured in Toronto, and in New Westminster BC, the home of the 47th Battalion and later in his home town of Kudkiv in Ukraine.