Frederick Tilston was born in Toronto, Ontario, on the 11th of June 1906. He was educated at De La Salle High School, the Ontario College of Pharmacy and the University of Toronto. Prior to his enlistment in 1940 he was sales manager of a drug manufacturing company. He enlisted as a private but because of his age, education and experience, he was quickly promoted to sergeant and then to officer. The wounds received in the action described in the citation necessitated the amputation of both legs, but exactly one year later from the date of his injuries he returned to work for his former company in the capacity of vice-president in charge of sales. He later became president and then chairman of the board for that company. In 1963 he became Honorary Colonel of his old regiment which had been renamed the Essex and Kent Scottish Regiment. He resided in Toronto, Ontario until his death on the 23rd of September 1992. 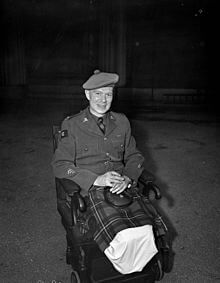 The 2nd Canadian Division had been given the task of breaking through the strongly fortified Hochwald Forest defence line which covered Zanten, the last German bastion west of the Rhine protecting the vital Wesel Bridge escape route.The Essex Scottish Regiment was ordered to breach the defence line north-east of Udem and to clear the northern half of the forest, through which the balance of the brigade would pass.

At 0715 hours on 1st March 1945, the attack was launched, but due to the softness of the ground it was found impossible to support the attack by tanks as had been planned.

Across about 500 yards of flat open country, in the face of intense enemy fire, Major Tilston personally led his company in the attack, keeping dangerously close to our own bursting shells to get the most cover from the barrage. Though wounded in the head he continued to lead his men forward, through a belt of wire ten feet in depth to the enemy trenches shouting orders and encouragement and using his Sten gun with great effect. When the platoon on the left came under heavy fire from an enemy machine-gun post, he dashed forward personally and silenced it with a grenade; he was first to reach the enemy position and took the first prisoner.

Determined to keep up the momentum of the attack he ordered the reserve platoon to map up these positions and with outstanding gallantry, pressed on with his main force to the second line of enemy defences which were on the edge of the woods.

As he approached the woods he was severely wounded in the hip and fell to the ground. Shouting to his men to carry on without him and urging them to get into the woods, he struggled to his feet and rejoined them as they reached the trenches of their objective. Here an elaborate system of underground dugouts and trenches was manned in much strength and vicious hand-to-hand fighting followed. Despite his wounds, Major Tilston’s unyielding will to close with the enemy was a magnificent inspiration to his men as he led them in systematically clearing the trenches of the fiercely resisting enemy. In this fighting, two German company headquarters were overrun and many casualties were inflicted on the fanatical defenders.

Such had been the grimness of the fighting and so savage the enemy resistance that the company was now reduced to only 26 men. One quarter of its original strength. Before consolidation could be completed the enemy counter-attacked repeatedly, supported by a hail of mortar and machine-gun fire from the open flank. Major Tilston moved in the open from platoon to platoon quickly organizing their defence and directing fire against the advancing enemy. The enemy attacks penetrated so close to the positions that grenades were thrown into the trenches held by his troops, but this officer by personal contact, unshakable confidence and unquenchable enthusiasm so inspired his men that they held firm against great odds.

When the supply of ammunition became a serious problem he repeatedly crossed the bullet-swept ground to the company on his right flank to carry grenades, rifle and Bren ammunition to his troops and replaced a damaged wireless set to re-establish communications with battalion headquarters. He made at least six of these hazardous trips, each time crossing a road which was dominated by intense fire from many, well-sited enemy machine-gun posts.

On his last trip he was wounded for the third time, this time in the leg. He was found in a shell crater beside the road. Although very seriously wounded and barely conscious, he would not submit to medical attention until he had given complete instructions as to the defence plan, had emphasized the absolute necessity of holding the position, and had ordered his one remaining officer to take over.

By his calm courage, gallant conduct and total disregard for his own safety, he fired his men with grim determination and their firm stand enabled the regiment to carry out its object of furnishing the brigade with a solid base through which to launch further successful attacks to clear the forest thus enabling the division to carry out its task.

Article Name
Major Frederick Albert Tilston - Victoria Cross Recipient
Description
On his last trip Major Tilston was wounded for the third time, this time in the leg. He was found in a shell crater beside the road.
Author
Bruce Ricketts
Publisher Name
Mysteries of Canada