Frederick George Topham was born in Toronto, Ontario, on August 10th, 1917.  He was educated at King George Public School and Runnymede High School.  Prior to his enlistment he was employed in the mines at Kirkland Lake.  In November 1945 he laid the cornerstone for Sunnybrook Memorial Hospital in Toronto.  After demobilization he worked at Toronto Hydro. He died on the March 31st, 1974 and is buried in Toronto. 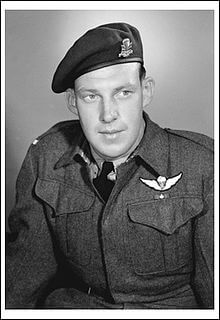 On March 24th 1945, Corporal Frederick Topham, a medical orderly, parachuted with his battalion into a strongly defended area east of the Rhine. At 1100 hours, while treating casualties sustained in the drop, a cry for help came from a wounded man in the open. Two medical orderlies from a field ambulance went out to help this man.  They were both killed as they knelt beside the casualty. Without hesitation, and on his own initiative, Corporal Topham went forward through intense fire to replace the orderlies who had been killed.  As he worked on the wounded man he was shot through the nose. In spite of severe bleeding and intense pain, he never faltered in his task. He completed immediate first aid.  Then carried the wounded man to shelter through continuous fire.

During the next two hours Corporal Topham refused all offers of medical help for his own wound. He worked most devotedly throughout this period to bring in the wounded, showing complete disregard for the heavy enemy fire.  He did not consent to his own wound being treated until all other casualties had been cleared.

His immediate evacuation was ordered, but he refused and was eventually allowed to return to duty.

On his way back to his company he came across a carrier, which had received a direct hit. Enemy mortar bombs were still dropping.  The carrier was burning and its own mortar ammunition was exploding. An experienced officer on the location warned not to approach the carrier.

Corporal Topham immediately went out alone, in spite of the blasting ammunition and enemy fire, and rescued the three occupants of the carrier. He brought these men back across the open, and although one died almost immediately afterwards, he arranged for the evacuation of the other two, who undoubtedly owe their lives to him.

This N.C.O. showed sustained gallantry of the highest order. For six hours, most of the time in great pain, he performed a series of acts of outstanding bravery, and his magnificent and selfless courage inspired all those who witnessed it.

Article Name
Frederick Topham Victoria Cross Recipient
Description
Without hesitation and on his own initiative, Corporal Frederick Topham went forward through intense fire to replace the orderlies who had been killed.
Author
Bruce Ricketts
Publisher Name
Mysteries of Canada