Charles Merritt was born in Vancouver, British Columbia, on the 10th of November 1908, the son of a First World War hero. He was educated at Lord Roberts School, Vancouver, University School, Victoria, and Royal Military College, Kingston, Ontario. In private life he was a barrister and solicitor. Prior to the outbreak of war in 1939 he had been, since 1929, an officer in the Seaforth Highlanders of Canada. In 1942 he was transferred to the South Saskatchewan Regiment. Following his gallant action at Dieppe as described in the citation, he became a prisoner of war for the balance of the hostilities. In 1945 he was elected to the Federal Parliament for Vancouver-Burrard and served in that capacity until 1948. Following the loss of his seat in the General Election of that year, he returned to his law practice in Vancouver where he and his wife took up residence. In 1951 he was appointed commanding officer of the Seaforth Highlanders of Canada ( R ), a post he held for three years. 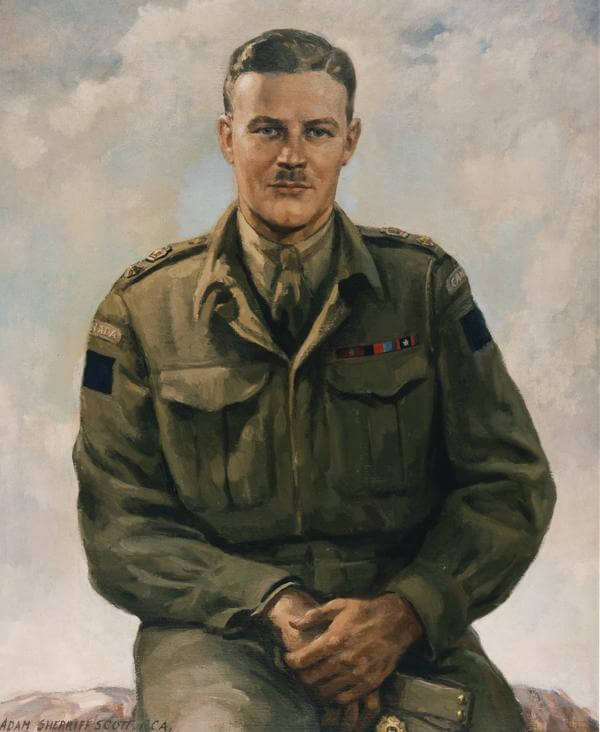 For matchless gallantry and inspiring leadership whilst commanding his battalion during the Dieppe raid on the 19th August, 1942. From the point of landing, his unit’s advance had to be made across a bridge in Pourville which was swept by very heavy machine-gun, mortar and artillery fire: the first parties were mostly destroyed and the bridge thickly covered by their bodies. A daring lead was required; waving his helmet, Lieutenant-Colonel Merritt rushed forward shouting, “Come on over! There’s nothing to worry about here.”He thus personally led the survivors of at least four parties in turn across the bridge. Quickly organizing these, he led them forward and when held up by enemy pillboxes he again headed rushes which succeeded in clearing them. In one case he destroyed the occupants of the post by throwing grenades into it. After several of his runners became casualties, he kept contact with his different positions. Although twice wounded Lieutenant-Colonel Merritt continued to direct the unit’s operations with great vigour and determination and while organizing the withdrawal he stalked a sniper with a Bren gun and silenced him. He then coolly gave orders for the departure and announced his intention to hold off and “get even with” the enemy. When last seen he was collecting Bren and Tommy guns and preparing a defensive position which successfully covered the withdrawal from the beach. Lieutenant-Colonel Merritt is now reported to be a Prisoner of War. To this Commanding Officer’s personal daring, the success of his unit’s operations and the safe re-embarkation of a large part of it were chiefly due.