Victoria Cross awarded to O’Kill Massey Learmonth for the action at Hill 70 on 18 August 1917.

“For most conspicuous bravery and exceptional devotion to duty. During a determined counter-attack on our new positions, this officer, when his company was momentarily surprised, instantly charged and personally disposed of the attackers. Later he carried on a tremendous fight with the advancing enemy. Although under intense barrage and mortally wounded he stood on the parapet of the trench, bombed the enemy continuously and directed the defence in such a manner as to infuse a spirit of utmost resistance into his men.” 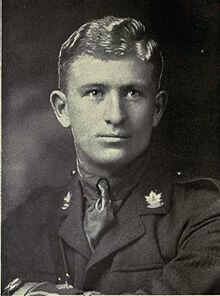 Towards the end of July 1917, the 2nd moved into the area around Hill 70. Rumor had it that the Canadian Corps was preparing a 2 division attack on the feature and the battalion’s presence added credibility to the gossip. Hill 70 was located midway between Loos and Cite St. Auguste, and although classified as a hill, the feature was not nearly as imposing as Vimy but merely the highest contour in the area.

The attack on Hill 70 began in the early hours of 15 August. The 1st Canadian Division held the center and the 2nd and 3rd brigades sallied forth to do battle, leaving the 2nd as part of the 1st brigade in reserve. They moved forth on 16 August under heavy harassing fire. Suffering numerous setbacks and overcoming several obstacles, the Second relieved the entire 3rd brigade at approximately 0700 hrs on the 17th. The 2nd Battalion held the new position and repelled a strong German counter attack which stretched all four companies to the breaking point.

The German attack on the morning of 18 August marked the 2nd Battalion’s first encounter with flame throwers. The Germans employed these fearful weapons in an attempt to clear the parapet of defenders and the Germans showed great courage pressing home their attack against the withering fire from the Iron Second, but was finally forced to retreat having gained none of their objectives.

A particularly valiant display was that of Maj O’Kill Massey Learmonth, commanding 3 company. When part of his line recoiled from a fierce attack, Maj Learmonth himself bombed the attackers, and despite two separate wounds, inspired the men to counter-attack and repulse the Germans. Later, Maj Learmonth sustained a broken leg but continued to direct his company from the bottom of the trench, refusing evacuation. When finally forced to leave, Maj Learmonth first gave a complete briefing to Lt Hugh Smith and then, although mortally wounded, forced his stretcher bearers to take him to report to battalion headquarters. Maj Learmonth, who was with the battalion from the beginning and was wounded as an enlisted man at Ypres, died in the dressing station below Hill 70. For his courage and extreme valour he was awarded the Victoria Cross posthumously.