Frederick Thornton Peters was born in Charlottetown, Prince Edward Island, on the 17th of September 1889, son of the Attorney General and the first Liberal Premier of that province. He was educated at St. Peter’s Private School, later went to school in Victoria, British Columbia, and from there to Naval School in England. He graduated as a midshipman and three years later he received his commission as a sub-lieutenant. During the First World War he was decorated with the Distinguished Service Order, the first ever given to a Canadian, and the Distinguished Service Cross for gallantry in action. Following the action which won him the Victoria Cross, he was proceeding to England when the plane he was in crashed and he was killed. He has no known grave but his name appears on the Naval Memorial at Portsmouth, England. 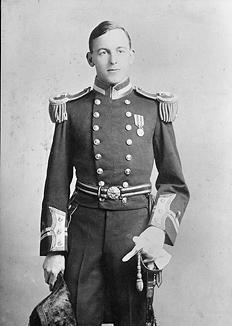 Captain Peters was in the “suicide charge” by two little cutters at Oran. “Walney” and “Hartland” were two ex-American coastguard cutters which were lost in a gallant attempt to force the boom defenses in the harbour of Oran during the landings on the North African coast. Captain Peters led his force through the boom in the face of point-blank fire from shore batteries, destroyer and a cruiser – a feat which was described as one of the great episodes of naval history. The “Walney” reached the jetty disabled and ablaze, and went down with her colors flying. Blinded in one eye, Captain Peters was the only survivor of the seventeen men on the bridge of the “Walney”. He was taken prisoner but was later released when Oran was captured. On being liberated from the gaol, he was carried through the streets where the citizens hailed him with flowers. He won the D.S.O. and D.S.C. in the last (WW1) war. He was born in 1889.