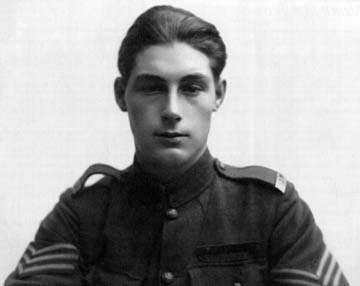 In part the citation read: Private T. Ricketts was awarded the Victoria Cross for most conspicuous bravery and devotion to duty on October 14,1918. During the advance from Ledgehem the attack was temporarily held up by heavy hostile fire, and the platoon to which he belonged suffered severe casualties from the fire of a battery at point blank range. Private Ricketts at once volunteered to go forward with his Section Commander and a Lewis gun to attempt to outflank the battery. They advanced by short rushes while subject to severe fire from enemy machine guns. When 300 yards away, their ammunition gave out. The enemy, seeing an opportunity to get their field guns away, began to bring up their gun teams. Private Ricketts at once realized the situation. He doubled back 100 yards, procured some ammunition and dashed back to the Lewis gun, and by very accurate fire drove the enemy and their gun teams into a farm. His platoon then advanced without casualties, and captured four field guns, four machine guns and eight prisoners. A fifth field gun was subsequently intercepted by fire and captured. By his presence of mind in anticipating the enemy intention and his utter disregard for personal safety, Private Ricketts secured the further supplies of ammunition which directly resulted in these important captures and undoubtedly saved many lives.

Following the war, Thomas Ricketts returned to Newfoundland, studied pharmacy and operated a drug store in St. John’s for a several years.

(Editors note:  Newfoundland was not officially part of Canada until 1949.)