Sgt. William Merrifield was a native of England, who had emigrated to Canada for employment. He enlisted in the Canadian Expeditionary Force (CEF) on the outbreak of war and in 1917, was transferred to 4th Battalion, CEF, as a replacement. He went on to win the Military Medal (MM) for his conduct during the horrendous battle of Passchendaele in November of that year. 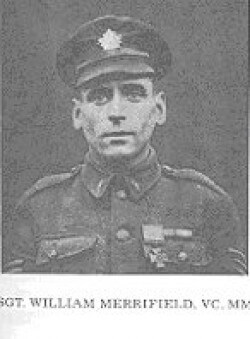 At the Battle of Abancourt in October, 1918 only a month before the Armistice, Sergeant William Merrifield was trapped with his comrades under the fire of two German machine-gun posts. Merrifield gathered up bombs (grenades) and single-handed attacked and destroyed the two machine guns.

Although wounded, he refused to be evacuated and continued to lead his platoon forward until wounded yet again. He was awarded the Victoria Cross for his heroic actions.

The 4th Battalion is perpetuated today by The Royal Hamilton Light Infantry, which contributed the majority of the soldiers to the unit.

Special note from Debbie Bolton:  In Sault Ste. Marie, Ontario Canada there is a statue in front of the Court House describing my Great Grandfather’s heroism and there is a Public School named William Merrifield V. C. Public School in honor of his memory!