The Klondike Gold Rush is, without a doubt, one of the most famous events in Canadian history. This brief but exhilarating period saw thousands of men and women from all over the world flock to the Yukon goldfields in search of fortune and adventure. It spawned outrageous villains like “Soapy” Smith, and bred celebrated Canadian heroes 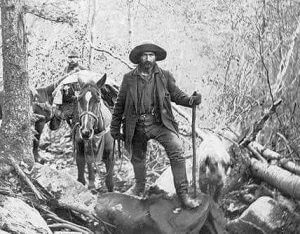 like Sam Steele. The Klondike Gold Rush inspired the poems of Robert Service, the novels of Jack London, and the films of Charlie Chaplin. It gave birth to the Northwestern genre, and changed the face of the Canadian North forever.

Here at Mysteries of Canada, we’ve put together a six-part series detailing the history of this great Canadian event.

The first part of our series describes the context behind the Klondike Gold Rush. First, it outlines the geography of the Yukon, the territory in which the Klondike is located. Next, it pinpoints the exact location of the Klondike region in this vast northwestern territory. Finally, it details the history of the Yukon pioneers who panned for gold in the Canadian Northwest long before gold was struck in the Klondike.

The second part of our series describes the discoveries made by Robert Henderson, George Carmack, and “Skookum” Jim Mason in the summer of 1896. These three prospectors discovered gold nuggets in the Klondike, sparking a small local gold rush.

The third part of our series details the small local gold rush that resulted from the discoveries of 1896. First, it describes the handful of lucky pioneers who wrested fortunes from the Klondike’s creek beds. After that, it describes the founding of Dawson City, a rough mining camp situated at the confluence of the Yukon and Klondike Rivers. In time, Dawson would become the centre of the Klondike Gold Rush.

The fourth part of our series outlines the true beginning of the Klondike Gold Rush. First, we describe how prospecting pioneers returned to civilization from the Klondike bearing fortunes in raw northern gold. Following these prospectors’ triumphant returns, restless men and women from all over Seattle and San Francisco prepared to set out for the Klondike, rallying to the cry of “Klondike or bust!”. Enterprising businessmen took advantage of the opportunity and marketed their wares as “Klondike grade”.

After that, we describe the rise of the towns of Skagway and Dyea on the Lynn Canal. We also detail the White Pass and the Chilkoot Trail, two major trails over the Coast Mountains over which Stampeders would travel on their way to the Klondike.

The fifth part of our series describes the various trails that Stampeders took to get to the Klondike. The most famous of these is the Bennett-Dawson Trail. Stampeders who took this route travelled from the Lynn Canal over the Coast Mountains by way of the White Pass or the Chilkoot Trail. On the other side of the divide, on the shores of Lake Bennett, they built canoes from green lumber. When spring breakup came, they paddled across Lake Bennett and down a succession of lakes and rivers to Dawson City.

Other trails to the Klondike include the grueling Ashcroft Trail up British Columbia; the arduous “All-Canadian” overland route from Edmonton, Alberta; the suicidal “All-American” route over the crevasse-ridden Valdez and Malaspina Glaciers; and the St. Michael Trail up the Yukon River from its mouth.

Our sixth and final post on the Klondike Gold Rush describes Dawson City, around which the rush revolved. It details the colourful characters who populated the boom town, whose exploits are now the stuff of legend. Finally, our series ends with a commentary on the legacy of the Klondike Gold Rush.

If you enjoyed these articles and would like to help support this website, please check out our online bookshop: