“THIS OLDTIMER WAS UNIQUE.” No better words could have been selected for Harry Fieck’s gravestone as this local legend danced to the beat of his own drum. Harry, born in Stratford, Ontario in 1900, came to the Yukon in 1941 and worked on the construction of the Alaska Highway. He was known as the best heavy machine operator in the North and often the only guy with guts enough to drive the machinery through the soggy muskeg to clear the route for the highway. He could also dig a basement with a hand shovel and punch in more post holes faster than anyone. 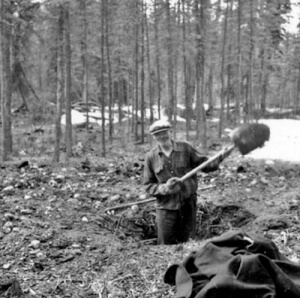 With these skills there was no shortage of work for Harry, but what really earned him his reputation was the host of stories that evolved due to his independent nature.Harry was hired to dig a basement for a house in downtown Whitehorse. He was offered sixty dollars plus a bottle of his favourite beverage. He completed the job by hand in a remarkable time of four hours and then went to the owner’s house for payment. The man was out at the time so his wife handled the transaction. She surveyed the job and was satisfied. However, she felt that sixty dollars was a bit steep for four hours work and offered Harry forty dollars and no bottle which she felt was inappropriate. Harry did not argue, but went away and spent the rest of the afternoon filling in the basement with dirt, scrap metal, a bed spring, and any other bits of junk he could find. The woman’s attempts to stop him were fruitless and by the time her husband returned home the refilling was complete. The husband was reportedly angry with his wife for changing the deal stating, “When Harry agrees to do a job for you, just pay him – don’t argue.” It cost one hundred dollars to clean out the basement and it was not done by Harry. 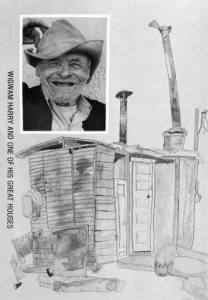 On another occasion, White Pass & Yukon Route contracted Harry to dig post holes for a fence. The supervisor had surveyed the site and marked where he wanted the holes dug. Harry went about the job and had it finished in a flash. He then proceeded to the White Pass office for payment. The girl handling the payment told him he would receive a cheque in the mail for his work. Harry insisted on cash. The pay clerk was firm so Harry went back to the job site and dropped boulders down the holes and tamped earth over them.

Harry distrusted banks with his cash. He had his own “bank”, the banks of the Yukon River. He once stashed two hundred dollars in an old stump along the river near his home. The land around him was being cleared and Harry woke one morning to the sound of an earth mover shoving brush and his stump bank into a pile ready for burning. Harry went wild, leaped on the machine, and grabbed the ignition keys. The clearing job was held up for two hours while Harry and the operator searched through the brush for his two hundred dollars. The money was never found.

Harry earned his nickname, “Wigwam Harry”, as at one time he lived under a tarp structure wrapped around a telephone pole in a wigwam fashion. Later, he moved from his wigwam to a more upscale home made from piano crates. Among Yukon characters, Harry was certainly unique. He died at 77 years of age. 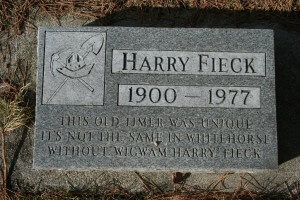 Article Name
WIGWAM Harry Fieck
Description
“THIS OLDTIMER WAS UNIQUE.” No better words could have been selected for Harry Fieck’s gravestone as this local legend danced to the beat of his own drum.
Author
Bruce Ricketts
Publisher Name
Mysteries of Canada