Malaria is an infamous killer throughout much of our world’s tropical areas; it kills or debilitates millions each year, and its economic impact is devastating. But most Canadians might have difficulty imagining malaria outbreaks in Canada. But, in the 1800s, particularly along the Rideau and Cataraqui Rivers, malaria was rampant.

The Rideau and Cataraqui Rivers flow through Eastern Ontario; the Rideau flows North from the Rideau Lakes to the Ottawa River, the Cataraqui flows south into Lake Ontario, near Kingston. They both flow through a rugged, post-glacial landscape, dotted with isolated lakes, ponds, wetlands, swamps, fens, bogs, and so forth. These sluggish and stagnant wetlands were ideal breeding grounds for the Anopheles mosquito, which transmits malaria.

When the 1800s dawned Eastern Ontario was sparsely settled, being too remote and too rocky to attract homesteaders. But the War of 1812 changed all that.  At that time, most settlement in Upper Canada (now Ontario) was along the shores of the St. Lawrence River, and the Great Lakes, and, with few roads, transport was mostly by boat. With the United States of America lining the other shores, the transportation routes were vulnerable to attack, particularly along the St. Lawrence from Kingston to Montreal. After we won the War of 1812 (in 1814), this transportation vulnerability was addressed.

The particular problem was military communication between Montreal, Ottawa, and Kingston. Anything shipped from Ottawa to Kingston or westward had to travel down the Ottawa River to Montreal, then up the St. Lawrence River to Kingston, in full view of the Americans. With Ottawa as the Capital, this situation could not continue.

To solve this problem, the British Royal Engineers, under Colonel John By, constructed the Rideau Canal system, which links Kingston and Ottawa, using the Rideau and Cataraqui Rivers. From 1826 to 1832, a series of locks, dams, canal sections, and other engineering marvels was built to form a 220 km canal that is still used today; ironically, many tourists on the canal today are Americans it was built to protect us from.

It was during the construction of the canal that malaria ran rampant. Each summer the ‘ague’ returned to ravage the population. There is no accurate count of those who died, but the numbers certainly were high. The only treatment at the time was quinine, derived from a tropical tree bark. Unfortunately, few labourers could afford the drug. (Bye the way, some of us today may sip a ‘Gin and Tonic’ on a warm day: the ‘Tonic’ contains quinine, and was originally designed as a malaria treatment for British troops in India).

One of the worst malaria areas on the Rideau Canal was Jones Falls, known today for its beauty. In 1826 it was a remote wilderness of rock and swamp. Colonel By’s crews built an amazing set of four canal locks, as well as the Jones Falls Dam, the largest in North America!, and a marvel in its own right. But, every July and August, work all-but stopped, due to the ague. Many workers left the area altogether, and those who stayed were too weak to work.

By the 1900s malaria had died out in Eastern Ontario, after we learned to eliminate mosquito breeding grounds. Today all that reminds us are the locks and dams, and graveyards, of the Rideau Canal.

How did malaria break out in Eastern Ontario? It seems likely there were two strains of malaria at work, one temperate strain and one tropical. The tropical strain would have been brought to Canada by British soldiers, particularly Royal Engineers who had built railways and dams in India, and were brought to Canada to build the Rideau Canal, and the other developed here. 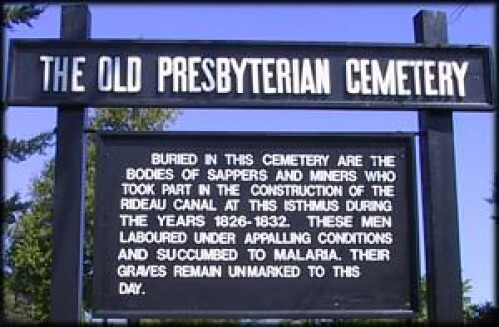