Who would think of building an aircraft carrier in the mountains of Alberta?  Project Habakkuk was a classified WWII concept which would revolutionize the allied war effort by creating a fleet of unsinkable aircraft land strips out of ice.  The carriers were to be at least 600 m long, 90 m wide and up to 45 m deep.

The idea came from a “mad little” scientist by the name of Geoffrey Pyke.  Pyke worked as a scientific advisor to Lord Mountbatten.  Mountbatten burst into Winston Churchill’s bath room one day and announced the existence of Pykrete, ice with 14% sawdust mixed into a slurry, by tossing a piece into Churchill’s bath water.  Ipso facto, the idea of the cool aircraft carrier was borne. 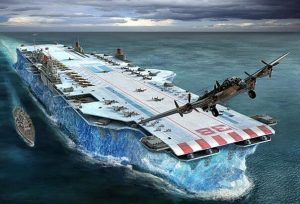 During the war the life blood for England was the convoys, which made their way across the North Atlantic from Canada.  While close to shore the convoys could be protected by aircraft.  In the middle of the Atlantic, beyond the range of the land-based aircraft, was the area known as Mid-Atlantic Gap or U-boat Alley.  This stretch of open ocean was the “playground” for the German navy, the U-boats in particular.

Churchill believed that if aircraft could patrol over U-boat alley, more shipping would get through.  The idea was to build landing strips on the ocean to land and refuel the planes.

The idea was brilliant.  If the strips were bombed or torpedoed they could be quickly repaired with water frozen into place.

Canada was viewed as the perfect location for the large scale tests as winter conditions were necessary to test the concept and method of construction which used ice as the principal material.

In 1943, preparations began in Jasper for the building of a 1,000 ton model on Patricia Lake.  The 1:50 scale model was constructed to gather information on how they could be insulated and cooled to prevent melting.  Patricia Lake was chosen because it offered a good probability of cold weather and the remote location ensured project secrecy. 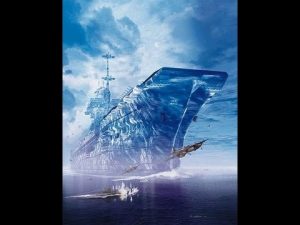 The engineers managed to keep the model frozen during the entire summer of 1943.

Unfortunately, the astronomical cost of actually deploying a full-size  ship became apparent, and the venture was dropped.  The  refrigeration equipment was turned off, and the prototype sunk to the bottom where it still rests.

The remains of the model now lie on the bottom of the lake and can be visited by sport divers.

Written with help from the “Friends of Jasper”

[…] sold the idea to Winston Churchill, who gave it his enthusiastic support. Pyke called his operation Project Habakkuk (frequently misspelled as “Habbakuk”), after a verse from the biblical book of Habakkuk: […]

[…] sold the idea to Winston Churchill, who gave it his enthusiastic support. Pyke called his operation Project Habakkuk (frequently misspelled as “Habbakuk”), after a verse from the biblical book of Habakkuk: […]