The Lost Lemon Mine Mystery

Somewhere in south-western Alberta, in the Crowsnest Pass, close by Coleman (according to some), in The Lost Lemmon Mine, it is said, is a gold vein worth millions.

All you have to do is find it, and get past the curse! If you see a dead man with an axe in his head, you may be close!

It was back in 1870 or so, when a group of prospectors came into Canada, from Montana, to search for gold along the North Saskatchewan River.  Two of their number, Lemon and Blackjack, decided to strike out on their own, and left the group to explore the southwestern foothills of Alberta.

The two adventurers followed up the river spotting small pieces of gold.  In an article published in the Alberta Folklore Quarterly in 1946, Senator Dan Riley, who was Mayor of the town of High River in 1906, wrote an account of the find this way:

“Blackjack and Lemon found likely showings of gold in the river. Following the mountain stream upwards toward the headwaters they discovered rich diggings from grass roots to bedrock. They sank two pits and, while bringing their cayuses in from the picket line, they accidentally discovered the ledge from which the gold came…”(Note:  A cayuse is a small native range horse used to carry gear)

Lemon and Blackjack were rich!

But all was not happy in gold country.  Senator Riley continued:

“In camp that night the two prospectors got into an argument as to whether they should return in the spring or camp right there. After they had bedded down for the night, Lemon stealthily crawled out of his blankets, seized an axe and split the head of his sleeping partner. Overwhelmed with panic when he realized the enormity of his crime, Lemon built a huge fire and, with his gun beneath his arm, strode to and fro like a caged beast till dawn.”

It was rumored that some Blackfoot Indians witnessed the slaughter and reported it to their Chief, who, in turn, put a curse on the area of the deed.  In a cruel turn, the Blackfoot were blamed for the murder rather than Lemon.

Shortly after the murder a robust trapper named John McDougall was dispatched to bury the body of Blackjack.  Later, McDougall was hired to lead a party back to the mine area.  On his way to meet the group of miners that hired him, he stopped at Fort Kipp, Montana and drank himself to death.  (Could it be the curse?)

Lafayette French, a prospector who initially funded Lemon and Blackjack, also went looking for the mine.  It is possible that he succeeded as he wrote to a friend stating that he had found the mine.  Unfortunately French was killed when a cabin in which he was staying burned to the ground. He did not live long enough to share the secret of the mine’s location. (The curse strikes again?)

Even Lemon, who you would assume knew the location of the mine, had trouble.  His was the anxiety he felt and exhibited when came close to the location of his evil deed.

Did Lemon and Blackjack actually find gold in Alberta.  Geologists will tell you that the chances of the story being true are remote.  Gold deposits are generally associated with volcanic activity, which is why BC is filled with gold while Alberta is not.  Did Lemon and Blackfoot steal the gold from other miners?  Did they have any gold at all?

Just to make the soup a little murkier, in 1988, Ron Stewart, a geological technician with the University of Alberta, and later author of the book “Goldrush, The Search for the Lost Lemon Mine”, announced that he had found traces of gold in the Crowsnest Volcanics formation and a mini gold rush was on.  The newspapers were full of reports that at long last the mystery of the Lemon Mine had been solved.  However the gold found was in such poor concentration in the ore that it was uneconomical to recover.  This would have been at odds with what Lemon reported as their find.

Fred Kuhn, and his wife, both of Winnipeg, spend 5 weeks per year looking for the Lost Mine.  But Fred states that even if he finds it, it will remain lost!  He stated in an interview:

“I might go up and get the odd nugget or two…but as far as I’m concerned, there’s more appeal in looking for it then probably finding it”.

Seems that the Lost Lemon Mine will remain a Mystery of Canada!

Below is a Google Map of Coleman, Alberta.  Happy hunting, but watch out for the CURSE!

X does not necessarily mark the spot! 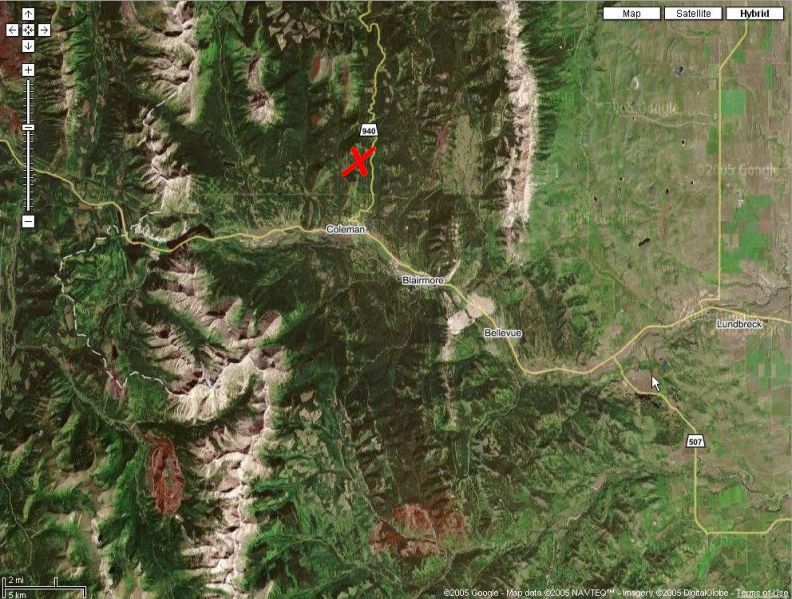 Article Name
The Lost Lemon Mine Mystery
Description
Somewhere in south-western Alberta, in the Crowsnest Pass, close by Coleman (according to some), in The Lost Lemmon Mine, it is said, is a gold vein worth millions.
Author
Bruce Ricketts
Publisher Name
History of Canada

6 Responses to “The Lost Lemon Mine Mystery”

They were not Blackfoot, but Stoney, Nakoda.

Are there still place up by Coleman you can still pan

i have studied the tale of the lost lemon for years as i live in the bow valley, the name lemon was given after the fact , when a con man , by the name of lemon took people up to the area south of the spray lakes to the only known pass at the time, which was discovered by a priest by the name of deshmett, the area we call white mans pass, they have named a lake there for lemom the area when he took off from the prospectors. At the time of the discovery of the ledge, not mine , the dewdney trail heading to fort steel was just made to service the lastest gold discovery , and the people in the story, your lemon and black jack, actually thomas latham from the cariboo rush fame , discoverer of the never sweat mine where on there way there when they where traveling with a group of natives south, blackjack being a half native, . the natives they where travelling with where heading to a potlatch at the foot of mount assinaboine and had told the whitties of the pass leading over the mountains to the fort and tobacco plains, being that they where not welcome the camped eslewhere in the valley and did the prospecting , it was at quartz ridge they found the gold. the story is true of the murder as it was watched by 2 indians and reported back to chief bearspaw of the morley indians at he potlatch , latham then left and went accross to fort steele and made the confession to john mcdougall , a priest visiting from fort saskatewan, because of his interest in the goldfield , he was schooled in england as a geoligist first ,a priest that latham had met while prospecting the north sask river. this is why after being unable to find the exact place (no one knew of the potlatch,, i was told by a 100 year old indian in the 90,s , he set up a church at morley, in hopes of conning the info out of bearspaw , read there cairn at the church , he was hated by bearspaw who knew he only wanted the gold, the two indians are on the treaty , bigman was there name, they where killed off to protect the area. i know more if you wish the other tribe at the potlatch if you go to lethbridge where killed when they cross the rive r all men women and children . that is why the tale gets smaller and only involves bearspaw and mcdougall the two indians, latham, and the guy by the name of lafayette who did check the k country but then finnally did go up into the spray area and found the real place and was burned by the morlly indians . After the story at the time which was every ones secret , the whole area was made into a nation park as to protect the rights if found for the church and the government………….I WILL SHARE MORE OF THE LEDGEND IF YOU WISH

I would love to hear more. I have been reading of the mine for years but haven’t had the chance to look for it. Can’t wait to hear some more of the legend.

i probably messed up my story line a little in what i wrote , so i will tell you of JACOBS SECRET , as i call my little story,and you can go from there.