The following is an excerpt from Indian Tales of the Canadian Prairies by James Francis Sanderson.

There was a large band of Blackfoot encamped on the plain of Medicine Hat. This was a favored resort of the Blackfoot in the spring and summer and, at the time I speak of, the whole district was claimed by them as a part of their territory.

The chief in command of the band was known as Wa-push-ka-pim-bach-tat, or Running Rabbit, and, as usual with Indians, they had quite a number of ponies with them. These they turned loose on the hillside above Bull Head (now Ross) Creek in charge of a young land, not suspecting that any roving band of their enemies would attempt to steal horses, in daylight at least, in the neighborhood of such a powerful band of warriors as they were. 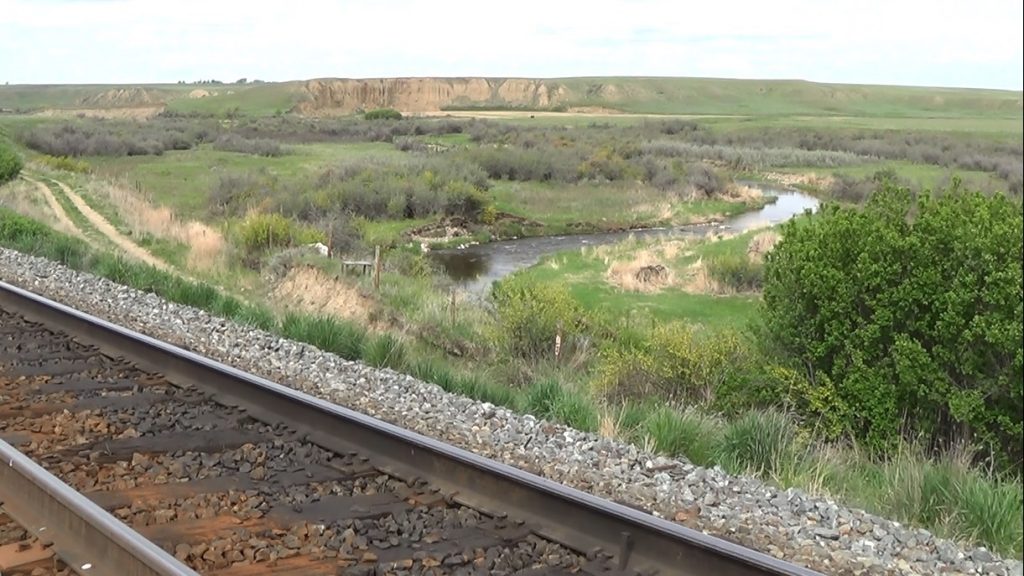 In this, however, they were mistaken, for two Cree braves, Ka-nich-ta-pas-ka-kiswat, or Good Firer, and a companion, came from Moose-ota-miskan, or Moose Jaw, about fifty miles north-east of where Moose Jaw station now is, and near Last Mountain Lake. In the early morning they came upon the band of ponies and, riding boldly into the middle of them, lassoed two and rode off with them. They took it for granted that the young lad would take them for Blackfoot and pay no heed to their movements. But in this they reckoned without their host. As soon as he saw the daring theft committed, he ran to the camp and gave the alarm.

Immediately on hearing the news, the O-kish-che-ta-wak, or warriors of the Blackfoot, started in pursuit, headed by their war chief, Running Rabbit, and were soon close on the heels of the horse thieves. They ran them into a coulee, about four miles down the river. The Crees took shelter in the brush and, being well armed and provided with ammunition, stood off their enemies until nearly close of day. They killed ten of the boldest of Running Rabbit’s braves, and compelled the others to keep at a respectful distance from the place where they had posted themselves.

The baffled Blackfoot, finding it impossible either to kill or dislodge them, and fearing that they might escape in the coming darkness, finally set fire to the brush on all sides of the brave pair, and burned them and the horses where they stood.

Around the campfires of the Crees the tale is told to this day, with great pride, how Ka-nich-ta-pas-ka-kiswat and his brave comrade sent ten of their enemies on the trail to the happy hunting grounds ahead of them, and died a warrior’s death themselves, without giving the Blackfoot the satisfaction of carrying their scalps at their belts.