HomeAlbertaOff for the West (NWMP)

Off for the West (NWMP)

The following is an excerpt from The Riders of the Plains: A Reminiscence of the Early and Exciting Days in the North West(1905), by Cecil Edward Denny. This work is in the public domain.

Continued from Chapter IV: Organization of the Force.

Off for the West

WE LEFT TORONTO by two special trains for St. Paul, June 6, 1874. We carried 300 men, 350 horses, baggage, camp equipage, and transport. Our quarters during the journey were rather cramped, particularly as regards sleeping. We had to sleep on the train, travelling both day and night. The horses were taken off three times a day for food and water, which delayed us considerably. On these stops we took meals at the different stations, arrangements having been made beforehand, so that everything was ready on our arrival. Several occasions our number taxed the accommodation at many of the stations. However, we did fairly well and no pains were spared to give us the best they had.

We arrived in Chicago June 7, and put up at the stock yards, unloading our horses and keeping them in pens during the night. A strong picket of two officers and 30 men was established over the stock. We had a heavy thunder storm that night which made it very unpleasant on duty. The men were thoroughly soaked and tired out by morning. It was difficult to procure provisions for so many men, the stock yards being some distance from the city, and hotels at that time being few in that vicinity. 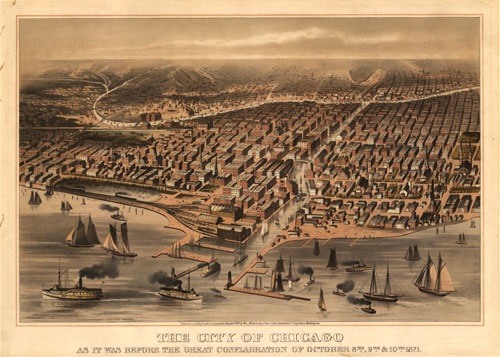 The men slept in the cars sand were glad enough to get away on the evening of June 8. We had no time to see the town, but were kept busy nearly all day reloading the horses, and getting all settled for another start. Everything so far had gone well, no accident having happened since we left Toronto. Our run to St. Paul was made by the noon of June 10. It was a continuous rain from our arrival at St. Paul until we left. Few of us owned such a thing as a waterproof, our uniforms being packed away, the men travelling in plain clothes. We had to march all the horses from the station into the town, a considerable distance. We took up all the empty stables to be found in St. Paul, which was at that time a small place. We had rather more time to stretch ourselves there than we had in Chicago, as the officers put up at a good hotel, the Metropolitan, and the men at the Merchants. The dealers in plain clothing made a good thing out of it, as we bought up all the waterproof and other overcoats in town. This break in the journey was appreciated by all after being so long cramped up in uncomfortable railway carriages. 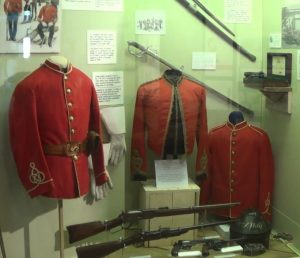 We left St. Paul for Moorhead, about 400 miles distance, in Dakota, June 11, in a pouring rain, and a dismal outlook It was. We arrived at Fargo, the station near Moorhead, in the afternoon of June 12, in very pleasant weather. This place then consisted of the station, a few small stores, and an hotel. It is now a thriving town of several thousand inhabitants. This point was the end of our railway journey, and the beginning of our march across the plains to Fort Dufferin, in Manitoba.

We unloaded everything and went into camp, pitching our tents for the first time. All of June 13 and 14 was taken up unloading, putting together the wagons, twenty in all, and loading them with goods. They were distributed among the three troops, D troop being the strongest in horses, getting 30, and E and F 20 each. The job was a long one, as the quantity of the baggage and other freight making a tight squeeze in the 70 wagons. Much of the stuff we had brought would have to be left behind at Dufferin, and we should have a hundred or more carts at that place to lighten the balance. We worked at this until midnight. I remember I had the guard of some 20 men in charge that night. This was the first real duty on the plains.

We finished loading June 14, and numbered the horses that day. We lost four which got away from the picket and were never recovered. D and E troops pulled out that day and camped on the prairie some five miles away. My troop, F, remained until evening to finish the work that was left. We then struck camp and joined the remainder that night, being ready to start across the plains the next morning for Fort Dufferin, 180 miles from Moorhead, and 60 miles from Winnipeg.

On June 15 we started for Fort Dufferin, 180 miles distant, with horses in prime condition. The wagons were too heavily loaded. We travelled in troops, D in advance with an advance guard, and F in the rear, supplying the rear guard. We made 36 miles the first day and camped on the bank of the Red river. This first day’s trip was much too far. In fact, was the seeds of disease, and the cause of so many of our horses dying and giving out on the after journey, is to be attributed to the long marches we made between Moorhead and Dufferin. We enjoyed a refreshing bath in the Red river. The day, though fine, had been very hot, and the mosquitoes were thick. On June 16 we again made a long journey of 34 miles, and both men and horses were pretty well played out, not being used to the hard travelling. One of our horses in F died during the day from fatigue. The following day we made 30 miles. The day was hot and we were beginning to get a little hardened. Our provisions were scanty, as our supper that night consisted of hard biscuits and tea. This was not very satisfying fare after a hard day’s march. We made 35 miles the following day and another horse died. We saw the first Indian camp, of Sioux, which of course was quite a curiosity to us.

June 19 we made Pembina, an American military post on the frontier between Dakota and Manitoba. That place has since become a thriving town. The American officers were very hospitable.

An illustration of Fort Dufferin by Henri Julien. 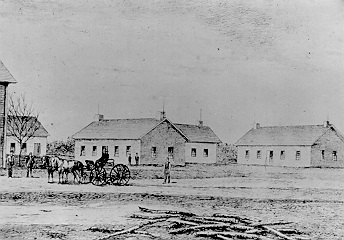 We crossed over into Manitoba and reached Fort Dufferin a very small settlement, on the afternoon of June 19. Here we met B and C troops that had arrived the day before from Winnipeg, where they had been stationed since the previous year. We very very glad to turn in after corralling the horses and pitching our tents. We lost three horses during the day, and the rest were pretty well done up. The next few days were taken up by making acquaintance with the officers of the two Winnipeg troops, unloading and reloading the wagons for our 1,000 miles journey across the plains, dividing the horses and wagons between the six troops, transferring men, branding horses, and getting generally ready for our march.

On the night of June 21 one of the most terrible thunderstorms I have ever experienced, struck our camp, blowing down all the tents. What was worse, at the height of the storm, when the camp was in confusion, and the darkness so great that you could not see your hand before you, 200 of our horses that were picketed in a board corral near the camp, stampeded right through the camp. They upset men and anything that came in their way. Several men were severely injured, and we were in complete confusion. Many men started after the herd, but the darkness was so great that they soon returned without finding a trace of them. We had to pass the night in the open, in a drenching rain, soaked through and through and utterly miserable. This seemed rather a gloomy beginning, but when the next day opened, warm and bright, we dried our clothes, repitched the camp and were soon cheerful again. Sixty men were sent after the horses, and it was some days before the majority of them were recovered. Some 25 were never seen again, a few were found dead, and those brought in were much pulled down. We had several more bad storms while in Dufferin, but kept our horses hobbled and well guarded, and had no more stampedes. 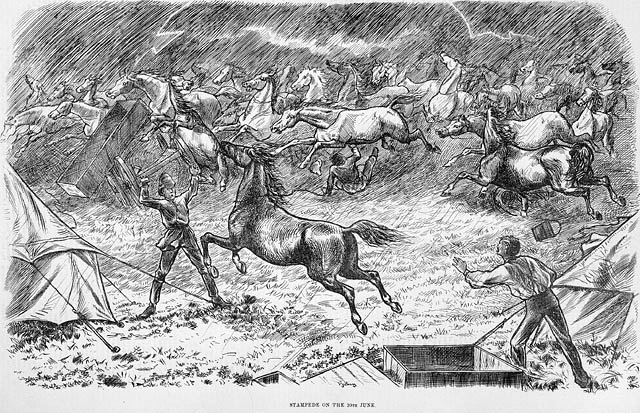 Colonel French proceeded to Winnipeg and purchased more horses, and a week or more was taken up in getting everything together, numbering and dividing horses, and getting all six troops into shape.

The troops were numbered from A to F and composed of an inspector and two sub-inspectors. This rank has since been changed, an inspector now being superintendent, and a sub-inspectors, an inspector. Fifty men was the strength of each troop, the horses and transport being equally divided. The two nine-pound guns were in charge of D troop an inspector, Captain Jackson, being in command of the gun detachment.

The horses had to be shod and much other work done before we could get off. Several parades were held and much drilling done. Whisky was plentiful and some of our worst characters were discharged from the force while here for drunkenness and other offences. The weather was unsettled during our stay, frequent storms making it hard on the men to get through the work. There was, in consequence, considerable grumbling.

While here the men and officers received their first pay, including a fair allowance for travelling expenses, since we left Toronto. This was the last pay any of us received for nearly a year. On our arrival in the west it was a time before we had matters arranged and direct communication was opened with the authorities in Ottawa. Some six or seven men deserted while we remained here, which rid us no doubt of some useless characters.

Our allowance of baggage over and above the kit was 50 pounds to each officer and 10 pounds per man. One hundred and twenty-five ox carts were engaged, with some 30 halfbreeds to drive them. By July 6 we had all in order to start, when news was received that a large band of Sioux Indians had attacked and murdered a large number of settlers at St. Joe, a small town near the line in Dakota. The officer commanding the American troops in that vicinity sent word to Colonel French, asking his cooperation to cut off these Indians, should they cross the line. Five of our troops, consisting of 250 men, started out, armed and mounted, for the point where it was supposed the Indians might cross. They returned the next day without seeing any signs of the Indians. This put us back a couple of days, and our last night brought us another tremendous thunder storm, but it did no damage. We, however, started on our westward journey on July 8, 1874, with 300 men and officers, 340 odd horses, 70 wagons, and 125 ox carts, driven by 25 half breeds. We were loaded with a six months’ supply of tea, sugar, flour, biscuit, and bacon, together with baggage, ammunition and forage. We left considerable baggage behind that we did not have transport for. Much of this was never seen again. We lost some 20 men altogether by desertion while at Dufferin, and about 20 horses, lost and dead, but the force was in good shape when we started, and in good spirits. 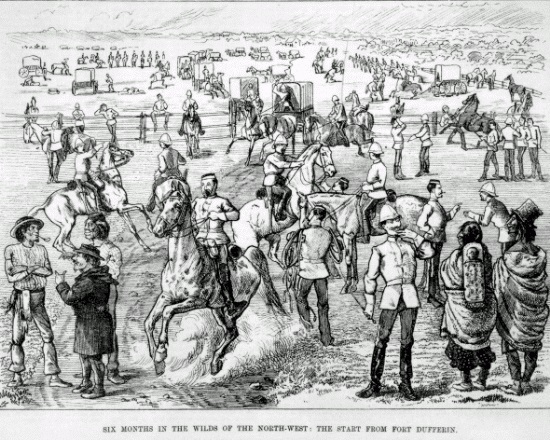 We made some 25 miles the first day, and camped on Murray river the first night. This was our real start for the west, which we had all been looking forward to since the first organization of the force.

Continued in On the March.

Off for the West (NWMP) was last modified: September 8th, 2019 by Hammerson Peters
Post Tags - Mounties