The city of Medicine Hat, nestled in the southeast corner of Alberta not far from the Saskatchewan border, has many claims to fame. Hockey fans know it as the home of the Medicine Hat Tigers, a ferocious junior hockey team which has produced NHL legends like Trevor Linden and Lanny McDonald. Road-trippers may associate Medicine Hat with its iconic Saamis Teepee- an enormous steel skeleton of a Plains Indian lodge which sits atop an old buffalo jump beside the Trans-Canada Highway. Of all its distinctive features, however, Medicine Hat is perhaps best known for its unusual name, which has its roots in a mysterious tangle of local native legends. 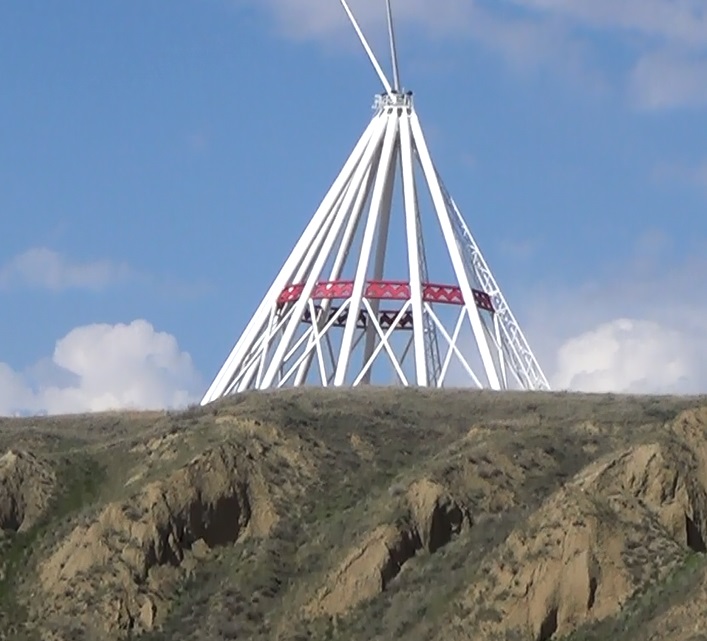 Medicine Hat was founded in 1883, when the Canadian Pacific Railway was built across the South Saskatchewan River. In the early 1900s, huge deposits of natural gas were discovered in the earth beneath it, prompting English writer Rudyard Kipling to famously remark that it boasted “all Hell for a basement”. Its surfeit of natural gas, coupled with an abundance of red clay which lies along the banks of the South Saskatchewan River, transformed Medicine Hat into a major brick and ceramics manufacturing centre which once stood to compete with northwesterly Calgary for the distinction of being Alberta’s most important city. 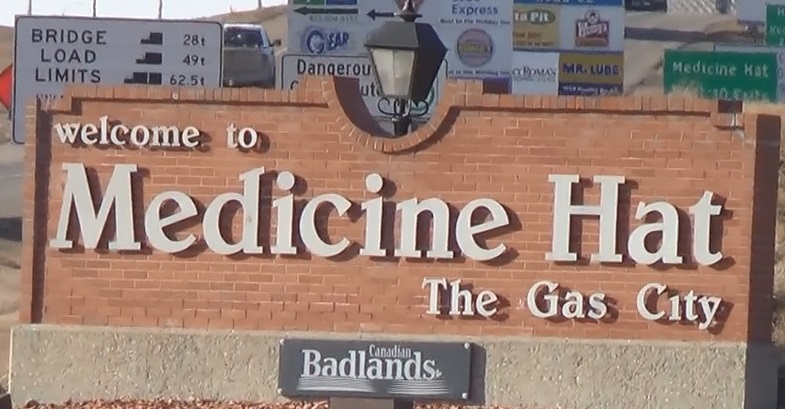 Despite a failed movement in the early 1900s to change its name to “Gasville” in an attempt to attract industry, Medicine Hat has retained its strange name since its founding. Its first citizens named the town after the old Indian name for the place, which, for a century prior to the town’s founding, had served as a sort of boundary between the territories the Blackfoot Confederacy and that of their hereditary enemies, the easterly Plains Cree and Assiniboine.

There are a great number of old Blackfoot and Cree legends which purport to explain the origin of the name ‘Medicine Hat’, most of which local historian Marcel M.C. Dirk diligently documented in his 1993 book But Names Will Never Hurt Me. The majority of these legends are based on either a battle between the Blackfoot and the Cree, a love story involving human sacrifice, a landmark that looks like an Indian headdress, or some combination thereof. In spite of their differences, every single legend has something in common, namely the inclusion of a medicine man’s headdress, or ‘medicine hat’. 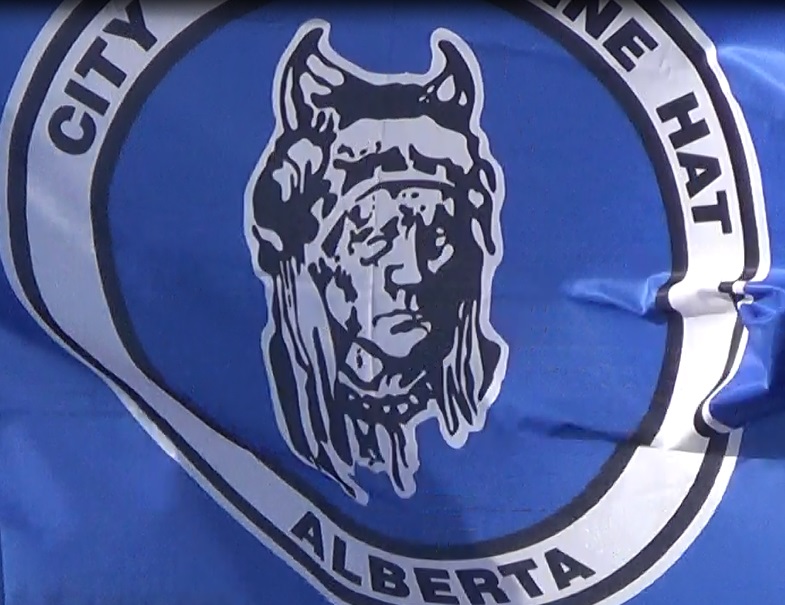 In 1894, a Scots-Cree frontiersman-turned-rancher named James Sanderson, who was one of Medicine Hat’s earliest citizens, documented one of these legends in a series of articles for the Medicine Hat News entitled Indian Tales of the Canadian Prairies. Sanderson’s tale is especially interesting as it constitutes one of the only recordings of an all-but-forgotten creature of Plains Indian oral tradition- an enormous supernatural river snake associated with the Great Spirit. 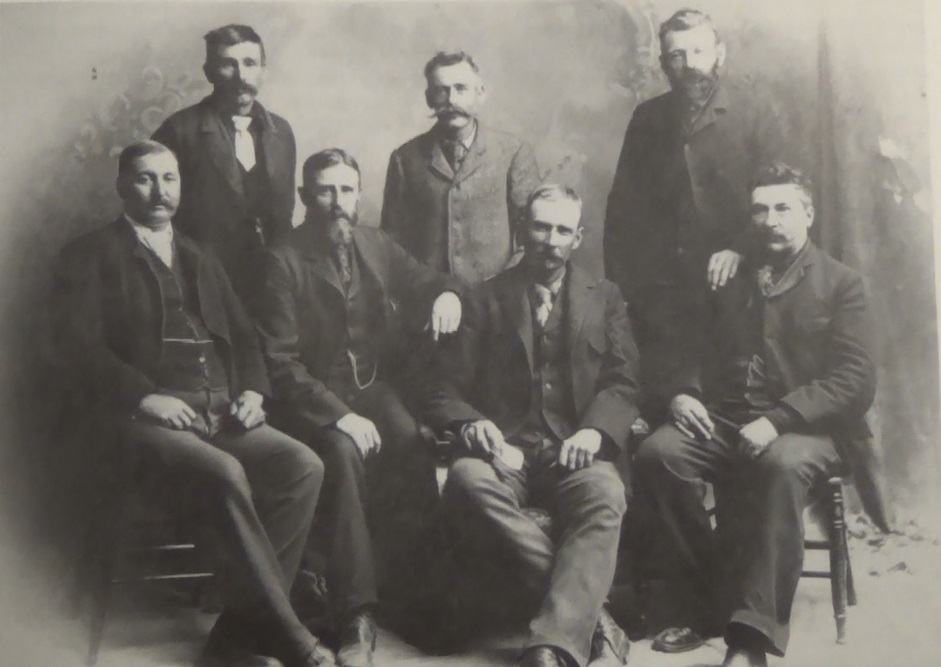 Early citizens of Medicine Hat, including several members of the North-West Mounted Police. James Sanderson sits on the far right on the bottom row.

Sanderson begins his tale by describing a certain setting on the South Saskatchewan River which is almost certainly the area between what is now Police Point Park and Strathcona Island Park, the former being opposite the river from the latter. At this particular point, the river bends substantially, resulting in a significant current which prevents the formation of ice “even during the most severe winters”. At the centre of the bend is an island, and to the east of the island are tall sandstone cutbanks, or cliffs, which fall into the river.

“This opening in the river is regarded with great interest by the Indians,” Sanderson wrote, “as it is believed to be the breathing place of the Great Spirit who lives in the river and who, when he shows himself, assumes the form of a serpent…” 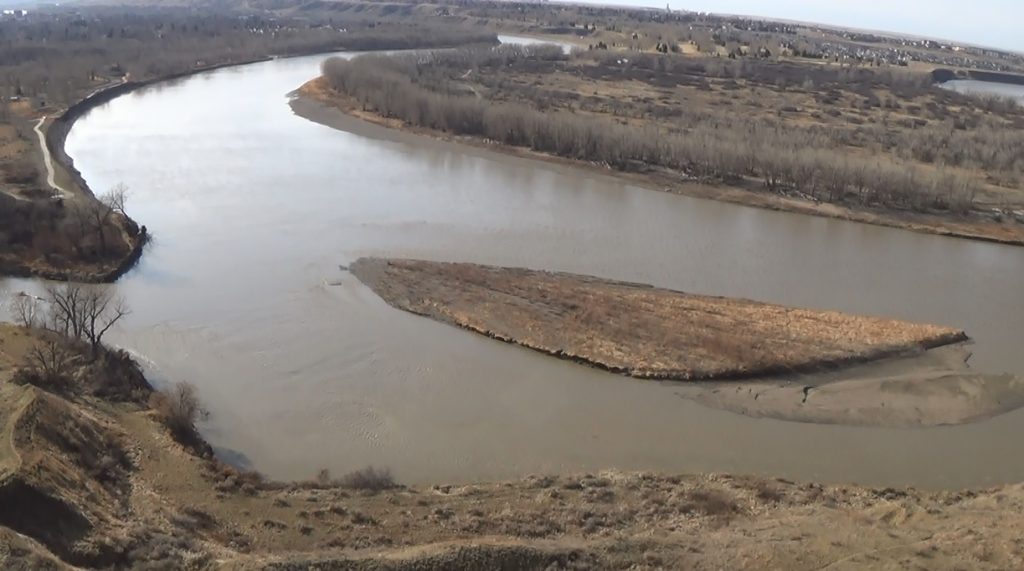 The view from atop the cutbanks. Seven Persons Creek enters the South Saskatchewan River on the left.

Sanderson then described the legend:

“Far back in Indian tradition, it is said that one of a hunting party of Blood Indians was sent forward to reconnoitre the country and see if the buffalo were to be met with any numbers. He was accompanied by his newly-married wife and a favourite dog, the latter bearing the travois- a crosspole arrangement to which the dog was harnessed- for the purpose of carrying some share of the travelling outfit.

“One evening, the Indian was camped by the river side and, as he was walking along near the opening in the river referred to, the serpent appeared to him and told him that if he would throw the flesh of his wife into the opening, he would become a great warrior and medicine man. The Indian returned to his tepee and repeated to his wife the words of the serpent. His wife at once expressed her willingness to die for the good of the tribe and in obedience to the call of the Great Spirit. Her husband, however, was reluctant and instead of his wife killed the dog. Carrying its carcass to the opening, he threw it in with the request that the Spirit might be pleased to accept from him his dog as a substitute for his wife. The Spirit refused to accept, and declared that, unless the Indian would sacrifice the wife he could do nothing for him. The man returned and informed his wife accordingly, and she again expressed her willingness to comply with the demand. 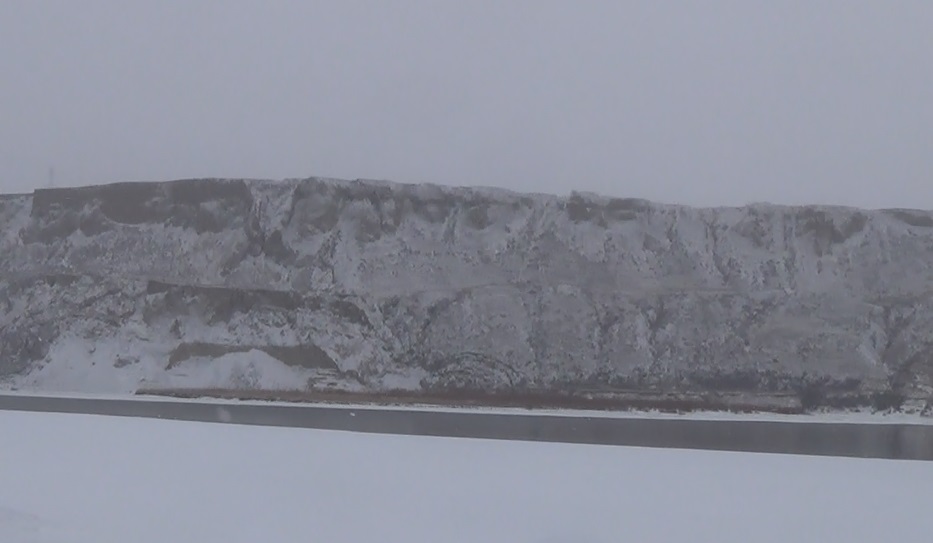 The cutbanks of the South Saskatchewan River.

“Finally, she was sacrificed and her flesh given to the Spirit, who then directed the man to stay all night on the island near by, to rise early next morning, and, as the sun rose, to proceed towards the cutbanks lying to the east. At the base of one of the cutbanks he would find a bag containing medicines and a hat trimmed with ermine. He was instructed to bring back the medicine bag and the hat with him to the Spirit who would explain the purpose of the hat and the efficacy of the medicines. The hat, he was told, was to be worn only in war, and would ensure victory to the wearer. The tradition has it that the Indian became famous as a medicine man and warrior.” 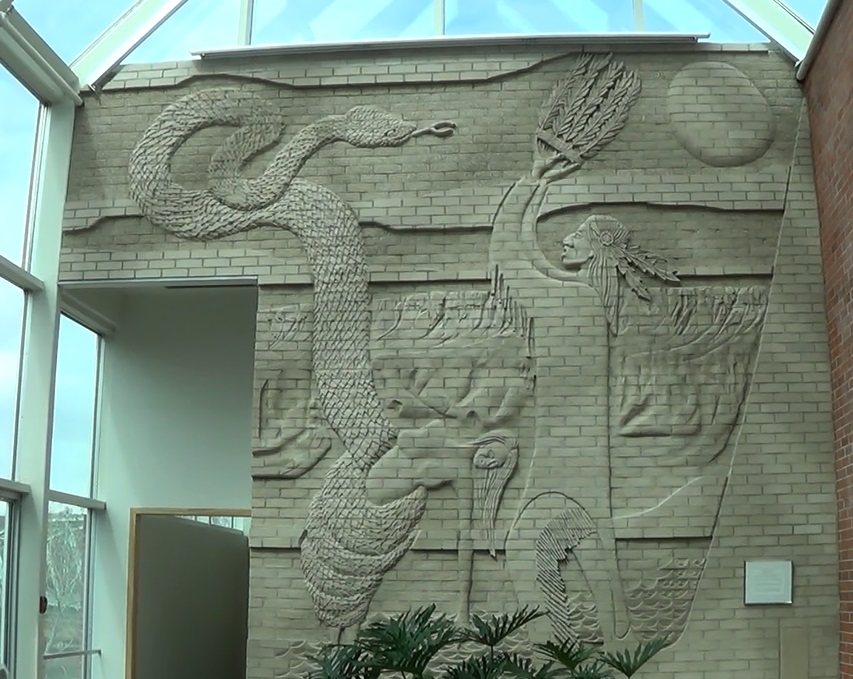 A mural of the legend by artist James Marshall in Medicine Hat’s City Hall.

How Seven Persons Got Its Name

Following the tale of the medicine hat, Sanderson documented another Indian legend featuring the Great Spirit in the form of a huge water serpent. This story takes place on Seven Persons Creek, a tributary of the South Saskatchewan which enters the river immediately adjacent to the island mentioned in the previous story. The tale purports to explain how the creek acquired its own strange name. 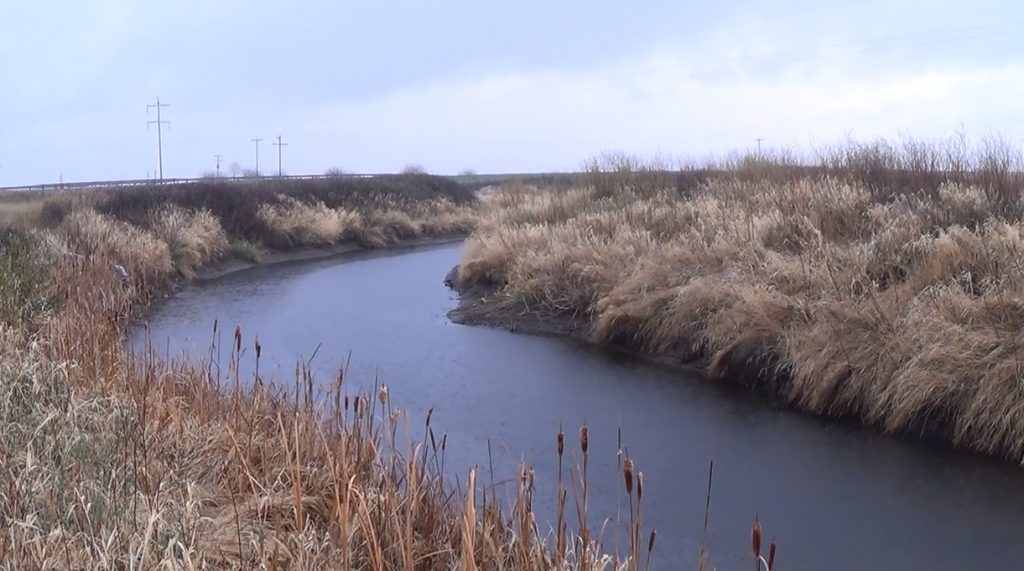 Before the coming of the North-West Mounted Police in 1874, the area of South Saskatchewan River and its tributaries in the vicinity of present-day Medicine Hat was a dangerous place frequented by raiding parties in search of trouble, and skirmishes and battles between Blackfoot and Cree warriors were common there. In 1872, a renowned war chief named Calf Shirt led a war party of Blood Blackfoot along Seven Persons Creek in search of enemies. Sanderson’s tale describes an old Indian legend born of this particular excursion.

While crossing the creek a short distance above its confluence with the South Saskatchewan, the war party came across:

“… the dead bodies of seven men, lying just as if they had been suddenly struck down when following each other in Indian file. Although it was evident that they had been dead for some time, there was not a single indication of decay about them, unless the absence of any vestige of hair upon their heads might be regarded as such. They were not scalped; the hair had simply been removed without any indication being left of the manner of its removal. There was no wound visible on the bodies, nor could the Blackfoot tell whence they had come, or to what tribe they belonged. 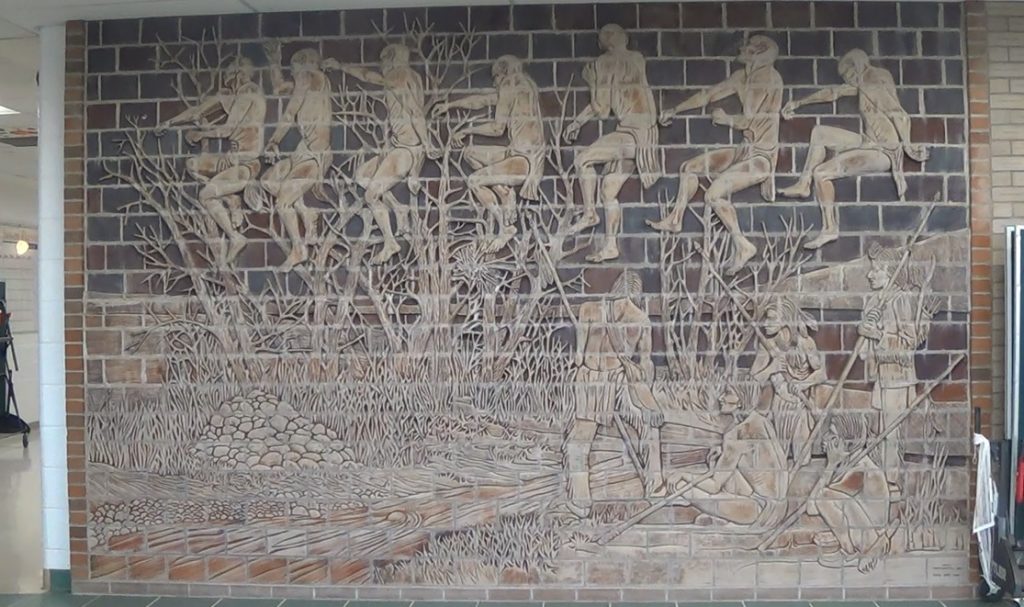 “Being unable to explain this most mysterious find, the braves made up their minds to watch the bodies, to see whether anyone would come to claim them or give them burial. They waited patiently for five days in the neighbourhood and watched the corpses closely, but there was no sign of any such party appearing and the bodies continued in the same condition of non-decay.

“As they discussed various theories to account for the death of the men, someone suggested that they had died of starvation, but a close examination of their equipment proved that they had not been short of provisions. The final conclusion of the Blackfoot was that the seven persons had, in some way, offended the Great Spirit who breathed through the unfreezing opening in the South Saskatchewan, and that he had punished then by striking them dead.”

The natives reverently covered the bodies with stones which, for many years, remained undisturbed by prairie wolves and other scavengers. Ever since, the waterway on which the bodies were discovered has been called Seven Persons Creek. 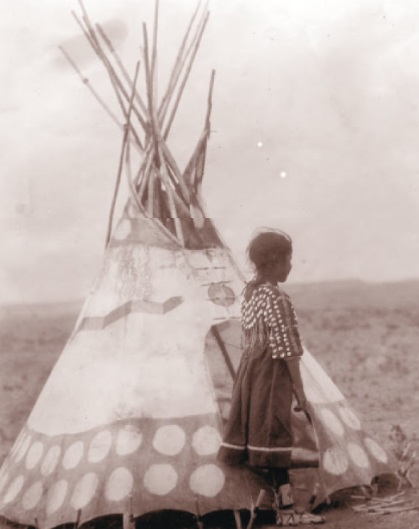 A Blackfoot teepee painted with a Big Water Snake motif.

Intriguingly, Sanderson’s tales are not the only documented Plains Indian legends involving giant supernatural water serpents. Blackfoot storyteller Earl Willows, for example, in 2009 online article “Earl Willows Tells the Story of the Warrior that Ate the Horned Snake”, recounted a traditional Blackfoot tale in which two warriors, on their way home from a raid, accidentally set up camp over top of a snake den. In the morning, they discovered an enormous snake nearby and burned it alive. Heedless of his companion’s warning, one of the warriors, named Weasel Calf, ate some of the snake’s cooked meat.

The following morning, the other warrior, named Flint Knife, found that his companion had transformed into a massive horned snake. Weasel Calf asked his friend to bring his belongings back to his family, and urged him to maintain a healthy distance from him during their travels for his own safety. The two continued on until they came to a large river. Weasel Calf declared that this would be his new home, and asked Flint Knife to ask his family to come and visit him there.

Sometime later, the family of the metamorphosed brave visited the river and were greeted by the huge serpent who explained how his transformation came about. The snake then asked his family to leave, as he was afraid he would be unable to control his strange urge to harm them. The Blackfoot left the river and never returned.

The Blackfoot and Cree legends of massive river snakes appear to be part of a much larger pan-American tradition of supernatural horned water serpents. From the Haida of the Pacific Northwest to the Mi’kmaq of the Maritimes, First Nations and Native American tribes across the continent all tell similar stories of powerful, often-horned water serpents imbued with supernatural abilities. For some reason, which this author hopes to investigate in another article, these creatures are almost invariably considered the archenemies of Thunderbirds– legendary giant eagles which also enjoy a prominent place in indigenous folklore across North America.