Have you ever wondered why the Alaska / Canadian British Columbia border looks so very odd, what with a slim panhandle running one third of the way down the BC coast? Alaska was once owned by Russia.  Their right was based on the establishment of fur trading locations at places such as Wrangell and Petersburg. and was confirmed in a treaty between Russia and the UK in 1825. 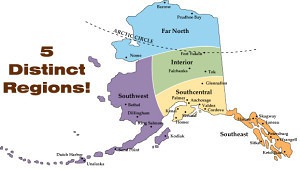 In 1872 British Columbia petitioned for an official survey of the boundary. The U.S. repeatedly dismissed the request, deeming it too expensive.

In 1898 a joint high commission met to discuss the Alaska Boundary Dispute at which time both sides agreed to a compromise. Unfortunately news of the compromise got out, and the western states vehemently protested, forcing the U.S. to meekly drop the compromise.

Later that same year Britain and the U.S. met to decide on a tribunal to settle the Alaska Boundary Dispute. They could not find a compromise and discussions were halted.

When Teddy Roosevelt won the presidency, he applied his motto, “speak softly and carry a big stick,” towards solving the dispute. Americans began a series of harassment measures against Canada.  Canadian miners in Alaska were denied certain legal rights, because of a loophole in the Alaskan Homestead act of 1899.  The U.S. also erected settlements along the Southern Panhandle border.  The final harassment was policy unofficially adopted by U.S. shipping companies, which slowed Canadian shipments and sped up U.S. shipments.

Finally in 1903 the Hay/Herbert Treaty called for a six member tribunal, made up of three Americans, two Canadians and one British member, to make a decision.

In January of 1903, the U.S. and Britain agreed on a format to address the boundary dispute arbitration. Each side was to appoint three impartial judges of repute.  Legal teams would present their cases and the tribunal would then render a decision.

Theodore Roosevelt made his three impartial selections. He appointed Elihu Root, Secretary of War; Henry Cabot Lodge, Senator from Mass, and George Turner Ex-Senator from Washington.  Using his Big Stick policy, Roosevelt sent word that if the panel didn’t find correctly he would send marines in to secure U.S. rights.

So much for impartiality!

On the other side Britain appointed Baron Alverstone, the Lord Chief Justice of England; Sir Louis A Jette, Lieutenant Governor of the Province of Quebec; and Allen B. Aylesworth, K.C., From Toronto.  Canada was confident they would receive British support due to the help they gave the British in the Boer War.

The reality of the situation was that Britain was more concerned about their relations with the U.S. than with Canada. British needed U.S. Steel and sympathies for an arms race with Germany.  Canada was a British Dominion. Thus its interests were relegated to bargaining chips. The other reality was that the Canadian Legal team had a weak case.

After three weeks of discussion and pouring over every document that was relevant to the dispute, The tribunal… surprise, surprise… voted in favor of the U.S. The Alaskan Boundary was established on paper, and various expeditions were ordered to properly survey the area. The Alaskan Boundary Dispute then faded from American recollection.

This is not true for the Canadian Collective memory. The deciding vote came from Baron Alverstone, the British member of the tribunal. Canada thought the British would protect their interests, and consequently view the dispute as a betrayal.

The Canadian Government reacted by changing its policy in the North. They had been told that they could not keep the Alaska Panhandle because they did not assert Canadian sovereignty there, so they changed this by sending Northwest Mounted Police to areas in the far North that were in danger of a similar dispute, such as Hershal Island in the northern Yukon Territory.

(This fact goes along ways to justify exerting our sovereignty over the northern ocean!)

Soon after the Alaska Boundary Dispute the Canadian Government raised the duties to bring goods across the border. This hurt the economy of Skagway, the primary border town in the Yukon region.  Also, after gold was discovered in Atlin, B.C., the government restricted the ownership of claims to those holding Canadian citizenship. Both policies- the expensive duties and ownership rights- were directed at Americans, apparently in revenge.

The Yukon initially reacted negatively to the Council’s decision, but positive results have come from it with increased American investments in the Yukon and a strong Canadian Presence with the Northwest Mounted Police.

Since the final decision was made on October 20th, 1903 the outcome of the Alaskan Boundary Tribunal has never been seriously challenged by the US and Canada. 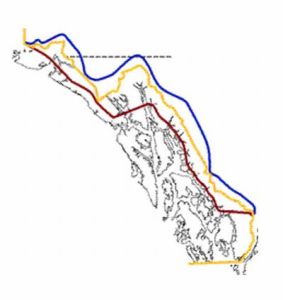 A recent note from a reader pointed out a problem with this article.  It may sound to some that the Alaska Boundary Dispute was over the actual Alaska handle.  We did not mean to leave that impression.  The dispute was rather over the location of the border down the handle.  As you can see in the image to the left (sorry about the quality), the red line indicates the Canadian declaration of the line.  The blue is the American case.  The yellow line indicates where the border finally ended up.

It is interesting to note than neither the American nor Canadian claim went as far south as the yellow line.  I wonder how that happened?

Bring it back to the Courts and go on the basis that they litterly stole it from us like they did the Islands of Hawaii.Theses islands were a sovereign nation with a Queen but the navel came took them over and got rid of the Monarchy.Britian sold us out we fought in the Boer War for them and they in turn sold us out to the Americans so they could have better relations with one another.This pan handle was under Canada and Britian as the names of islands were named after British Royalty.Britian and Russia had a treaty that secured that pan handle for Canada.The States has gone around the World taking land that was not theirs.They took California,Nevada,Arizona,Texas And New Mexico’s from Mexico’s which was not theirs.

The bias in this article is clear and overbearing. You undermine your position and credibility when you write with this tone

Just be happy…the decision was made years ago and no complaining is going to change anything. Canada has one thing the USA doesn’t have and that’s the Red Coated Mounties, and the Si. Roch schooner.

It’s been settled year ago, can’t you just be happy…there is always going to be likes and dis likes…just be happy the decision was made years ago, and there is no changing it today…beside Canada has something the USA doesn’t have and that is the Red Coated Mounties.

so how do we get it back? this is ours,any court in the world would agree with Canada

Friendly American here. I think you guys should give us that last strip of land and that island down there near the southern end of Alaska. How’s about a trade of some kind? Like maybe you guys would like to have the state of Maine? Just an idea. My urge to snatch up that bit down there is driven only by my sense of aesthetics. The maps would look better if that stuff belonged to us, and Maine belonged to you. That is all.

And, HEY! Why all the hate for the US, Canada? Americans LOVE you guys.

America didn’t get enough. We should have a nice hunk of western BC so we can travel between Alaska and the lower forty eight without ever entering Canada. Besides I kind of like Maine. I like Florida too so we should reserve sales there for non Canadians only. Americans just love you guys.

I think anybody with any ounce of common sense can see the bias or land grabbing greed of the US in obtaining or (Taking) this ‘Alaskan handle’ alongside their purchase of Alaska, during an era of US Empire building…All one has to do is just look at the map with their naked eyes and you can see clearly that the Alaskan handle is an inherent part of Canadian territory much like the California peninsula belongs to Mexico. I guess, ‘speak softly and carry the Big stick’ does come in handy after all !! And the uneducated shout, U S A, U S A, U S A……

Yes when you do look at a map of Canada and the USA the Alaskan handle is no dought part of Canada,part of British Columbia.It does look awkward to see how stupid the border looks.As for Maine it was part of New Franchise which was taken over by the British.That became part of Canada in the early years of forming Canada.It extends way up into Quebec and New Brunswick which does not look right on the Canada Us border.We sHould get a least half of it back.The names of towns and villages are mostly French.Another land grab by the Americans was Michigan they took a island that is quite big but does not even join up with Michigan so they could have the whole Great Lake of Michigan within their Country it has been said that a tunnel has been built to divert water to the water Hungry lower dry and dessert States.California is sinking as the water table is dropping.

I had no idea the Alaska border looked like that until I looked up the location of Port Protection after watching the National Geographic channel. It has got to be one of the strangest borders in the world.

The yellow line at the bottom represented a part of the border where both Canada/Britain and the U.S. were in agreement. They agreed that the border would follow the Portland Canal up to its head and from that point, or actually at latitude 56°, the border was in dispute. British Columbia had an entirely different southern starting point with it going up Clarence Strait instead of the Portland Canal, and that would have given dramatically more of the panhandle to Canada. You can see B.C.’s claim on the map on Wikipedia’s page on the dispute.

I just noticed this ridiculous border after looking up the location of Haines AK. I noticed the “panhandle” border and thought whats going on there ? After reading up on it I think it is another case of the US bully boy whose only objective is World Domination. It clearly should belong to Canada. Im impartial by the way I live in the UK

Those UGLY AMERICANS THINK THEY OWN CANADA first of all the russians stole the north east from Canada and the americans bought stolen land from russia. This land should be returned to canada known as alaska today??????

This mentality goes back many years,you know “if your not sure but your bigger just Take It” Not any different than Putin trying his Ukraine power dance crap. I say it time Canada revisit this bogus border claim and take our Rightful land mass and most importantly OUR Coastline!!! The way I see it they can have the string of Volcanic Islands. However the straight line that separates us from alaska needs to be drawn down to were it meets the Pacific. That’s all and that’s FAIR…. IMO I Am a pissed off Canadian that doesn’t give a shit about T Roosevelt’s so called “Carry a Big stick Policy”

There is nothing mad about wanting justice for blatant theft….

Years later I am finding this and I have to mention – how does Canada even exist? It should be given back to the indigenous tribes. If you want “fair” treatment to be retrospective, then who are you to decide the time limit on that?

Should the USA also be given back to the indigenous tribes?