The Cariboo Gold Rush started when, miners working sand bars in the rivers of British Columbia, found several creeks extremely rich with gold.  Many towns were sprung up near the gold.  Barkerville was the most notable. The Cariboo Gold Rush attracted world wide attention creating the Overlanders Expedition of 1862.

Prospectors started arriving in the Cariboo region in April of 1858.  The Steam Ship Commodore landed at Victoria with 450 men.  There were 60 British and the rest Americans, Germans, Italians, Chinese and many other nationalities.

About 30,000 prospectors headed north in the summer of 1858.  Most of them landed in Victoria to get a Mining License, which was required to look for gold. The population of Victoria grew overnight to 20,000 miners.  They camped out while waiting to get a mining license.  They purchased their equipment and food they would need for their journey to the gold-fields. The sand bars of the Fraser River did not yield much gold for many miners.  Many of them returned home busted, but many continued on to the Cariboo Region in the southern interior.

In 1862 Billy Barker Struck gold on Williams Creek.  A year later Barkerville, which had grown around Barker’s claim, had a population of 10,000 people.  By 1964 the Cariboo Wagon Road reached Barkerville, which allowed a steady stream of supplies to flow into the bustling gold town.

One of the lesser told stories of the Cariboo Gold Rush was about Frank Laumeister and his Camels.  If I told you that there were Camels in Canada in the mid 1800’s would you believe me? In the 1860’s Frank Laumeister was probably the most threatened freight outfitter in British Columbia. During the Cariboo gold rush Frank decided to use ” the ship of the desert ‘ to help move the huge amounts of cargo to the remote outposts. These two hump camels could out walk and out carry any animal known in North America. But to Laumeister’s dismay these bad-tempered animals would eat anything from a pair of pants to a bar of soap, if given the chance.

Horses from competing freight outfitters would stampede at the sight of a camel.  This caused large losses for those companies. The biggest drawback to making a profit was the loss of camels. These animals are sure footed on a sandy desert, but on the rocky trails of B.C. it was a different story. Most trails at the time were cut into steep rock canyon walls.

After a few years Laumeister sold the remaining camels to curious ranchers throughout the province. Thus ended a unique chapter in Canadian entrepreneurship.

On September 16, 1868, Barkerville was destroyed by fire.  The fire spread through all the wooden buildings within two and a half hours.  Only a handful of buildings were left.  They had to rebuild quickly, as Winter was only a couple months away. About 90 percent of the town was rebuilt within six weeks.

Barkerville continued to be a thriving town until the turn of the century.  In 1930’s it was eclipsed by the new mining town of Wells. 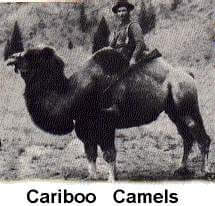 Article Name
Cariboo Gold Rush - Camels?
Description
One of the lesser told stories of the Cariboo Gold Rush was about Frank Laumeister and his Camels. Camels in Canada in the mid 1800's would you believe me?
Author
Bruce Ricketts
Publisher Name
Mysteries of Canada