Emerald Lake, near Field British Columbia, is a beautiful site. Formed by the thrusting of the mountain ranges and filled with glacial run-off, the surface of Emerald Lake glistens with the blue-green hue of an emerald. During the early days of the transcontinental railway, which joined Canada from coast-to-coast, the railway company built a fairly posh hotel on the shores of the lake.  The hotel was a way-stop for rail travelers as they took the two-day trip through the Rocky Mountains.

Environmental issues were not as high on the list of discussion in the 1800s as they are today.  As garbage began to accumulate from the hotel’s operation, the management, turned to the best refuse dump they could find, one which would not smell and attract roaming  bears  and was out of sight for their guests. Where better to dump the garbage but in the lake itself.

As mentioned, the lake is emerald colored due to the run-off water from the glaciers in the area. As glacial ice melts, the run-off dissolves small particles of powdered rock, commonly called rock flour. Rock flour makes the lake water quite murky but  extremely beautiful.

For years scuba divers have scoured the lake searching for what remains of the garbage… old bottles, old serving vessels, old dishes and three brass bath tubs! (The author has been one of those divers.)

I have no idea where the rumor of the bath tubs got its start but a story told to me (in 1980) by an old man who lived near the site goes: “…since the lake was so murky, garbage would not been seen by the genteel patrons of the hotel. It made sense therefore that when the hotel was to be shutdown, all the non-reclaimable furnishings including three bath tubs, made of brass, were taken out on the lake during the winter months where they sank into the lake as the ice melted.”

No one really knows if the story is true, but that doesn’t stop hundreds of scuba divers (treasure hunters all) from burning a couple of tanks of air every year as they grope their way through the lake in search of the BRASS BATH TUBS OF EMERALD LAKE.

Another Mystery of Canada. 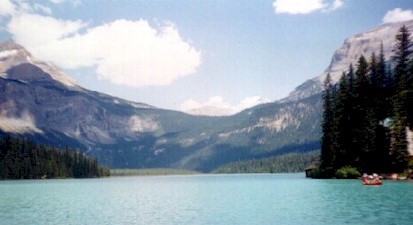