If you drive east of Chilliwack, British Columbia, take a left on the B.C. Highway 9, cross the Fraser River, and continue north for about ten minutes, you’ll enter an enchanting corridor through the Coast Mountains known as the Agassiz-Harrison Valley. This stretch of farmland, flanked by dark green mountains covered from base to peak with thick coniferous jungle, leads to a little village hugging the southern shores of vast Harrison Lake. 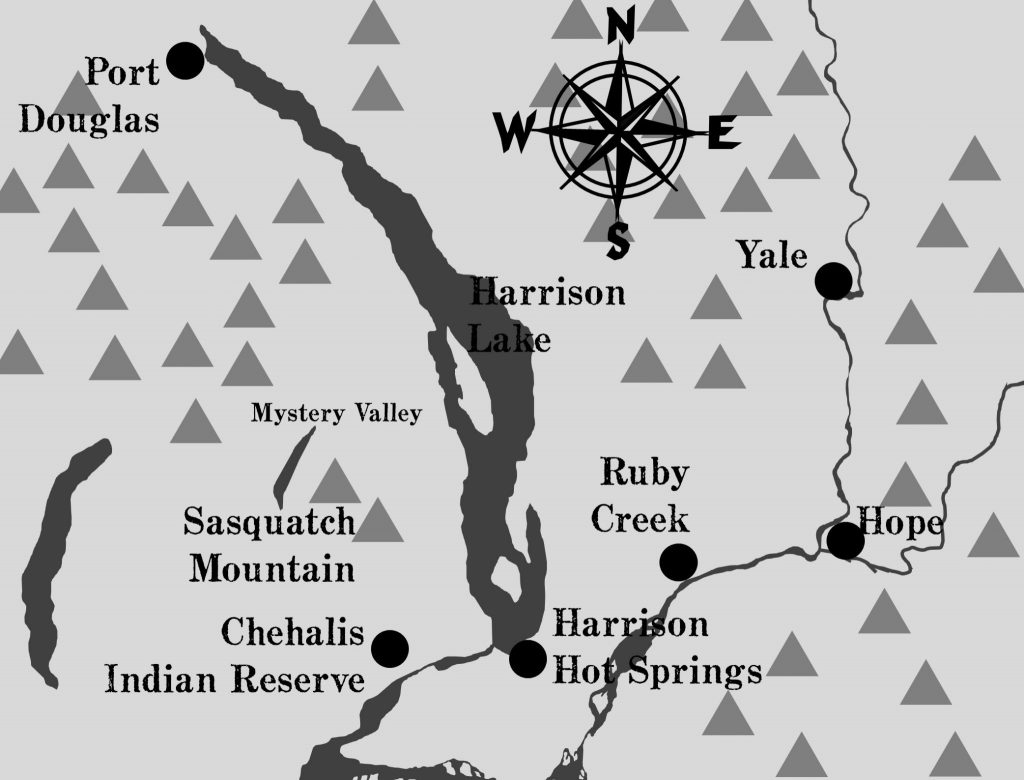 If you meander through the streets of this tiny community and keep a vigilant eye, you may begin to realize that there’s something distinctly different about the place. For instance, you might notice the hairy sentinel who keeps perpetual watch at the village entrance, lounging contentedly on a wooden bench beneath the town’s welcome sign. 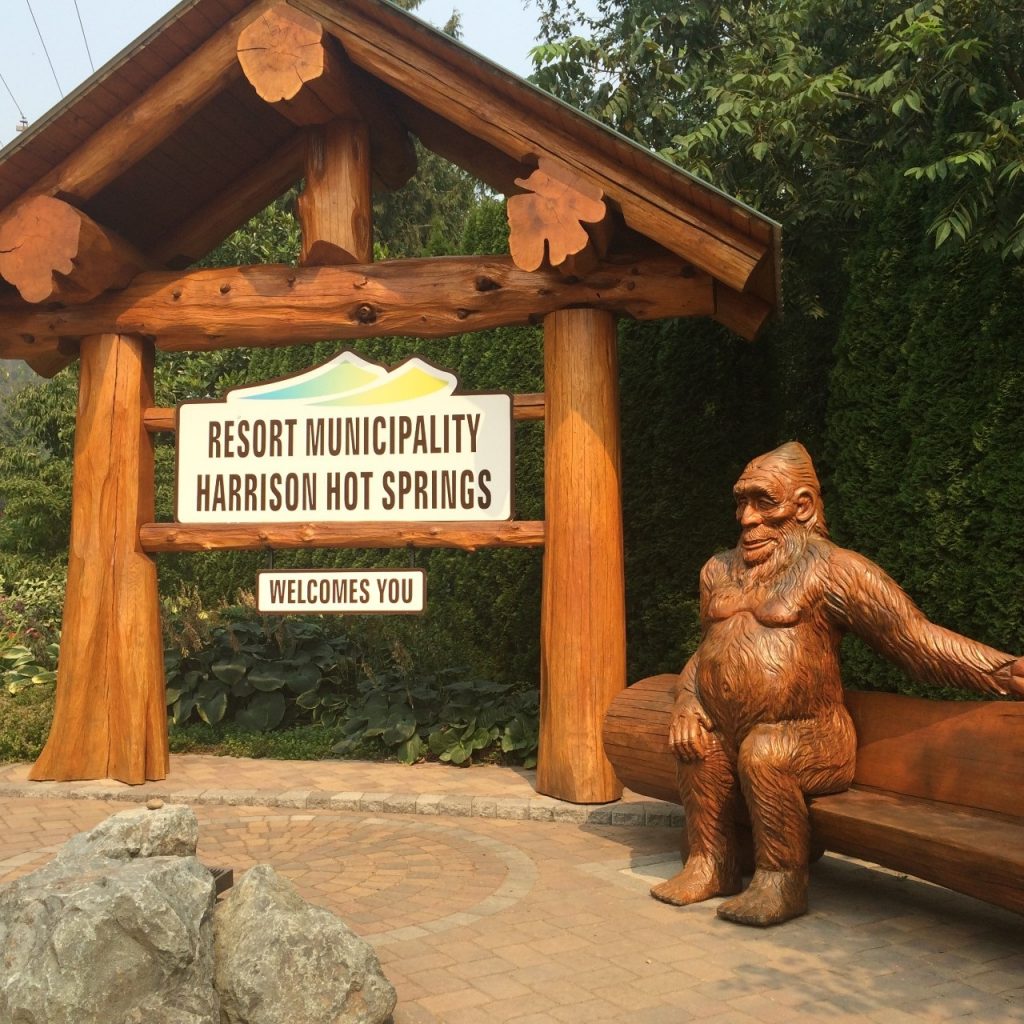 Perhaps you’ll catch a glimpse of another more startling village guardian standing further up the road, poised to hurl a wooden boulder at passing cars. 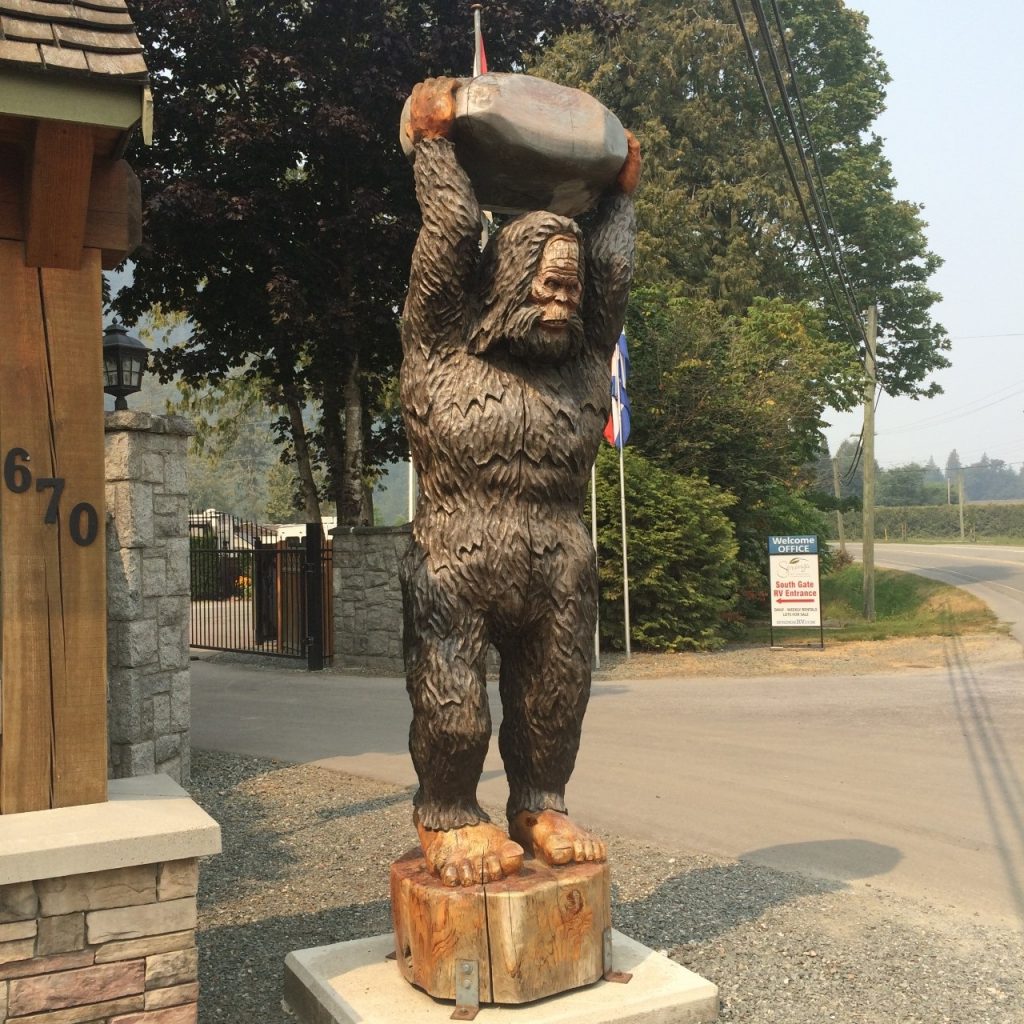 If you’re especially observant, you may detect a certain pattern in the titles of various establishments; the names of various inns, liquor stores, and ski resorts seem to suggest a recurring theme. Even the street signs are topped with a stylized silhouette of British Columbia’s most elusive resident. Welcome to Harrison Hot Springs, the Sasquatch capital of Canada. 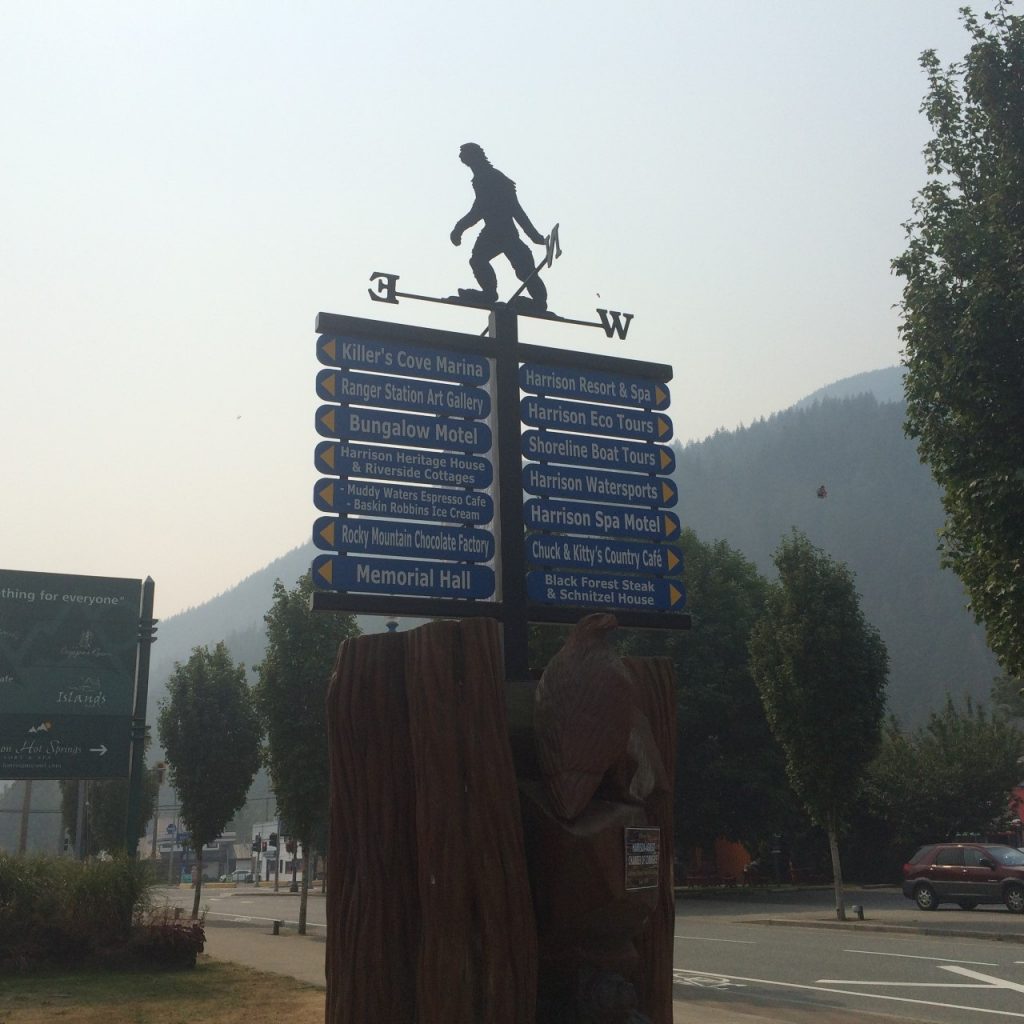 “Sasquatch” is a household name in the Fraser Valley, inducing chuckles in some and primal shivers in others. Derived from an old Halkomelem (Central Salish) word meaning “wild man of the woods”, it denotes a legendary race of hairy giants which, according to First Nations tradition and regional folklore, roams the forests of British Columbia to this very day.

Although a number of explorers recorded variations of it in their journals and memoirs, the legend of the Sasquatch was first introduced to the general public by a school teacher and later Indian Agent named J.W. Burns, who began teaching at the Chehalis First Nation Reserve- located a mere fifteen minutes from Harrison Hot Springs- in 1925. Burns used the word ‘Sasquatch’ for the first time in an article published in the April 1, 1929 issue of Maclean’s magazine, and the name stuck.

The Sasquatch Capital of Canada

Throughout the 1930s and ‘40s, Burns published a number of accounts of Sasquatch sightings which were reported to him by his Chehalis friends. These sightings took place in the mountainous country surrounding the Chehalis Reserve, from the so-called ‘Mystery Valley’ west of Harrison Lake to the Sasquatch Cave outside Yale, B.C., far to the east.

Through what is probably sheer coincidence, the epicenter of the various Sasquatch sightings reported by Burns’ informants seemed to be Harrison Hot Springs, a resort community renowned for its thermal mineral waters, which had been used by the Chehalis for centuries and discovered by white prospectors during the Fraser River Gold Rush. The village’s community fully embraced its newfound status as the Sasquatch capital of Canada and began holding an annual summer festival called ‘Sasquatch Days’ with the neighbouring residents of the Chehalis Reserve- a cherished tradition which endures to this day. 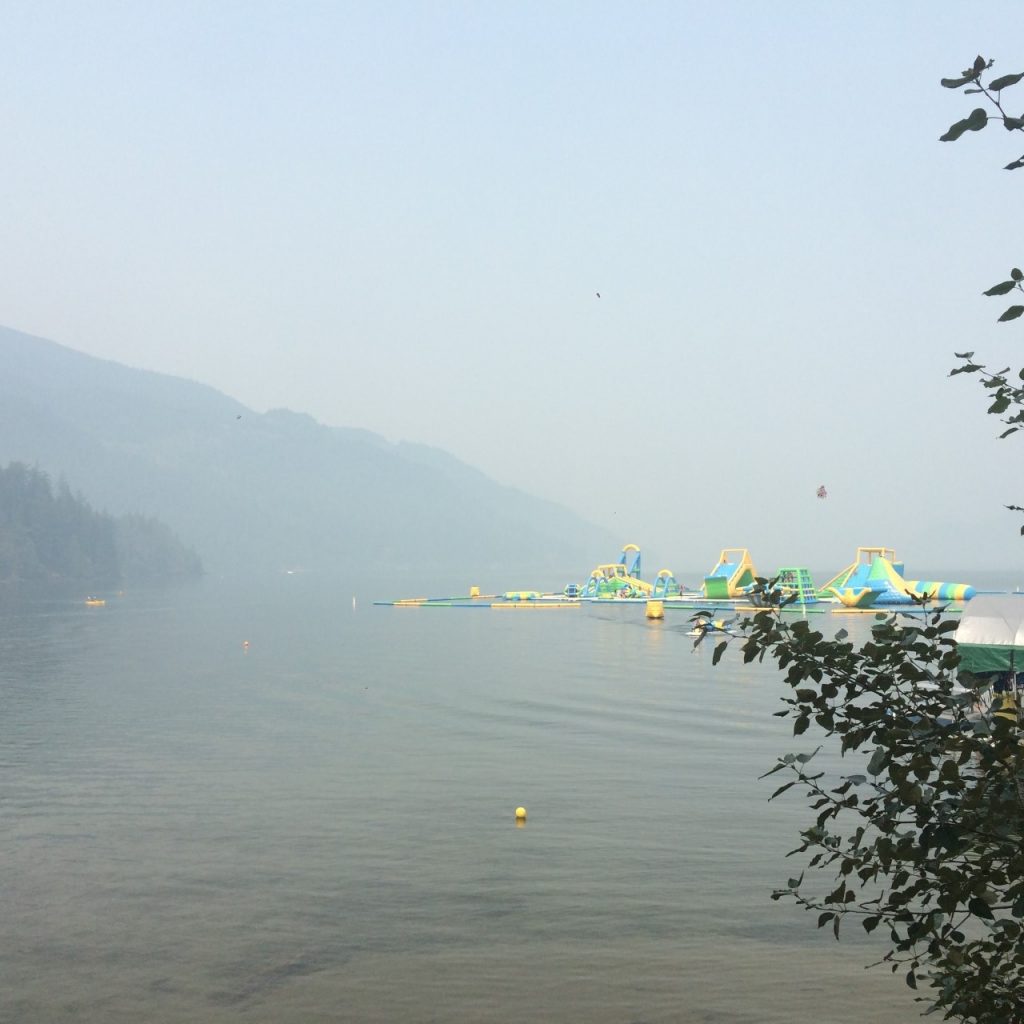 The view of Harrison Lake from Harrison Hot Springs.

The Sasquatch of Ruby Creek

Since the publication of Burns’ first article, Sasquatch sightings have taken place in the wilderness surrounding Harrison Hot Springs with casual frequency. Perhaps the most famous of these sightings is the one which took place just outside Ruby Creek, a tiny rural community situated on the banks of the Fraser River about 14 kilometres (9 miles) northeast of Harrison Hot Springs, as the crow flies.

In 1941, a Chehalis man named George Chapman lived in a cabin near Ruby Creek with his wife Jeannie and their three children. One day, while George was away from home, working as a tie gang labourer on the nearby railroad, the eldest of the Chapman children ran into cabin and declared that a cow had emerged from the woods. Alarmed by the inexplicable panic in her 9-year-old son’s tone, Jeannie stepped outside to investigate and spied what she first took to be a grizzly bear ambling along a distant hillside. Her two remaining children, aged 7 and 5, were playing in a nearby field at the time, and did not appear to be in any imminent danger. Nevertheless, Jeannie decided to call her children to the cabin as a precaution.

The bear’s strange physical appearance unnerved Jeannie, and so she decided to keep an eye on it from the cabin door as it made its way down the hill towards the railroad. Upon reaching the tracks, the animal, to Jeannie’s astonishment, reared up on its hind legs and began to stride towards the cabin like a human. Mrs. Chapman quickly realized that the creature was not a bear at all, but rather an enormous eight-foot-tall man covered with long brown hair. “I had much too much time to look at it,” she would later say of the incident. Jeannie described the giant has having an enormous chest and shoulders, inhumanly long arms, and a small head with a dark face. 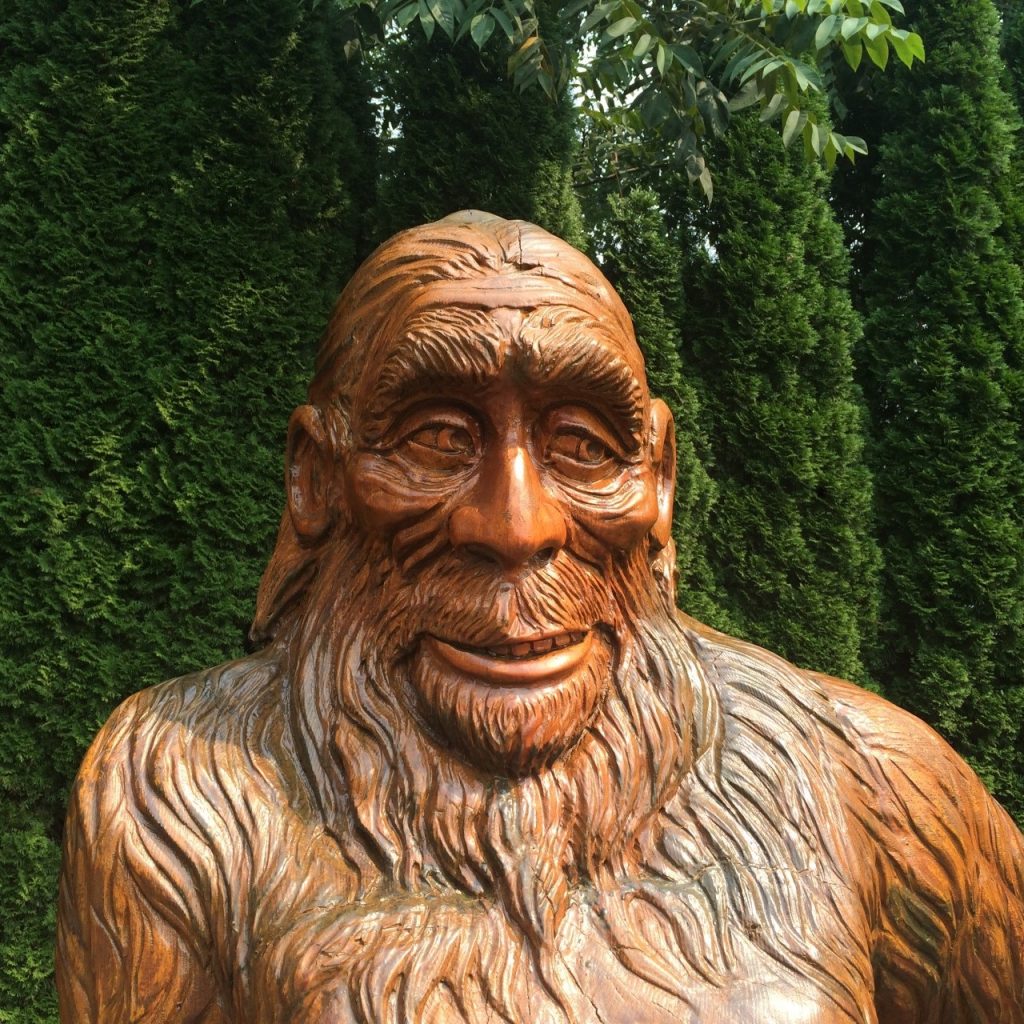 Fearing that the monster was after her children, Mrs. Chapman unfurled a blanket and used it as a screen to shield her little ones from the wildman’s gaze. Ordering her children to stay behind her, she walked backwards from the cabin in the direction of the Fraser River. When they had put considerable distance between themselves and the giant, which had begun to examine the house, Jeannie and her children raced for the safety of Ruby Creek.

Two hours later, George Chapman, none the wiser, returned home from work to find that his home had been ransacked. Specifically, he found that his storage shed had been broken into, and that a heavy barrel filled with dried fish had been hauled outside and torn open, apparently without the use of tools. George knew from the pair of 17-inch-long, humanlike footprints which encircled his cabin that the intruder had been a Sasquatch, one of the legendary wild men of the woods of which his people had long spoken. The tracks indicated that the giant had loitered about the home for some time before finally heading back into the mountains, tripping over a barbed wire fence as it departed the Chapmans’ property.

To his relief, George quickly spied four smaller sets of footprints leading along the Fraser River in the direction of Ruby Creek. He followed the footprints to his father’s house, where he discovered his family had taken refuge.

Accompanied by George’s father, who armed himself with a hunting rifle, the Chapmans returned to their cabin the following day. In the nights succeeding the incident, they heard strange howls emanating from the nearby woods. Sometimes they would awake in the morning to find huge footprints in the vicinity of the cabin. When the terrifying nocturnal visitations persisted for a week straight, the Chapmans decided to abandon their cabin and relocate.

In 1957, the Ruby Creek incident attracted the attention of John Willison Green, a Canadian journalist and one of Canada’s most prominent Sasquatch researchers. Green was so impressed by the Chapmans’ testimonies that he decided to settle in Harrison Hot Springs, where he lived and carried out his research until his death in 2016.

The incident at Ruby Creek, of course, was not the only Sasquatch sighting to take place around Harrison Hot Springs. Not by a long shot.

Back in March 1932, for example, several newspapers around Canada and the United States reported on an alleged sighting experienced by Frank Dean, a resident of Harrison Mills, located across the Harrison River from the Chehalis Reserve.

One night, the story goes, Dean was roused by the barking of his dog. He stepped outside to investigate the commotion and saw an enormous hairy man standing in the moonlight. The creature growled at Dean and began to advance towards him. Terrified, Dean stumbled back into his cabin and barred the door. The giant prowled about his cabin for some time before finally retreating into the bush.

In the summer of 1934, the experience of a Mrs. James Caulfield, who lived with her husband on a farm outside Harrison Hot Springs, hit papers across the continent. While washing her clothes in the Harrison River, Mrs. Caulfield heard a noise similar to that of a hummingbird. In her own words:

“I turned my head but instead of a bird there stood the most terrible thing I ever saw in my life. I thought I’d die for the thing that made the funny noise was a big man covered with hair from head to foot. He was looking at me and I couldn’t help looking at him. I guessed he was a Sasquatch so I covered my eyes with my hand, for the Indians say that if a Sasquatch catches your eye you are in his power. They hypnotize you. I felt fait and as I backed away to get to the house I tripped and fell. As he came nearer I screamed and fainted.”

Fortunately, her scream attracted the attention of Mr. Caulfield, who ran to her assistance just in time to catch a glimpse of a huge hairy figure darting into the woods.

The Ruby Creek incident, Frank Dean’s sighting, and Mrs. Caulfield’s experience are but a few of the many Sasquatch stories to come out of Harrison Hot Spring. From peeking through windows at hapless farmwives to hurling rocks at Chehalis fishermen, the Sasquatch made fairly regular appearances in the Harrison area throughout the 1930s and ‘40s. Some say that the legendary wild man of the woods pays the occasional visit to his old stomping grounds to this very day.

Things to Do in Harrison Hot Springs

If, like J.W. Burns and John Green, you find yourself enthralled by the mystery of the Sasquatch, consider paying a visit to Canada’s Sasquatch capital. There, you can hike the trails of Sasquatch Provincial Park- a natural area located about six kilometres (four miles) west of Ruby Creek- or brush up on your Sasquatch lore at the local Sasquatch Museum. A long relaxing soak in Harrison’s thermal waters makes for an excellent wind-down after a long day of Sasquatch hunting, and Sasquatch Days, with its canoe races and traditional salmon barbeque, offers a tantalizing glimpse into the culture of the Chehalis people, from whom the legend of the Sasquatch derives. 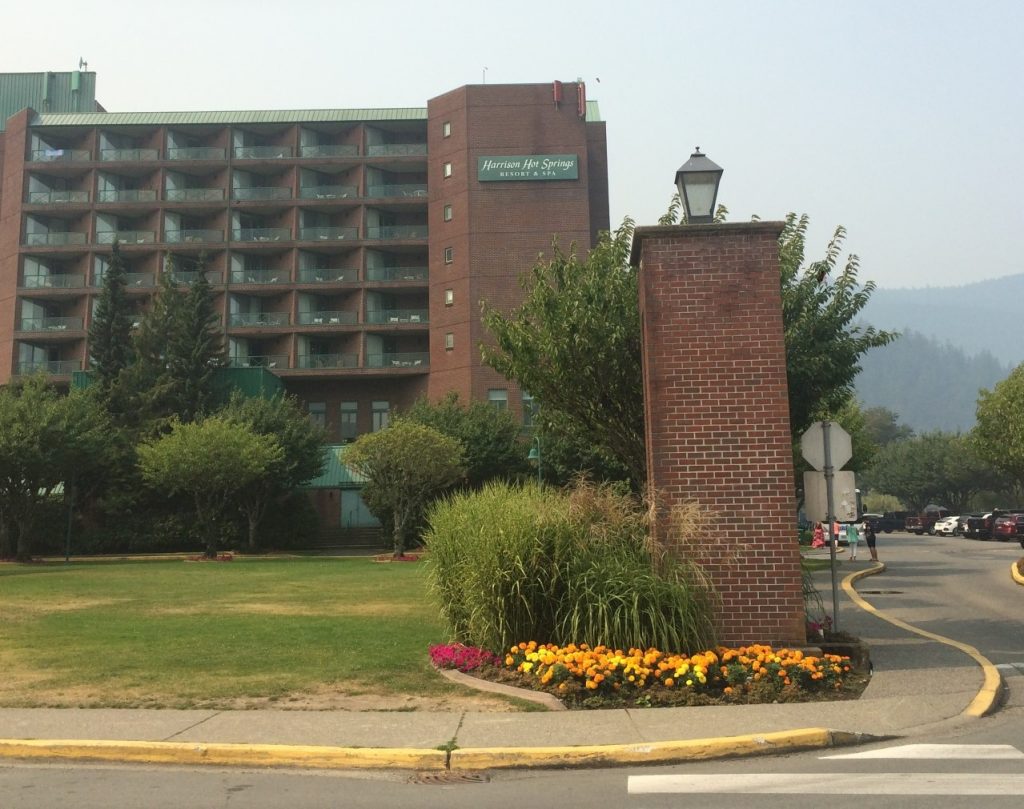 If you do decide to pay a visit to Harrison Hot Springs, remember to keep your eyes peeled. If you’re really lucky, you might just catch a glimpse of the most famous forest-dwelling denizen of the Sasquatch Capital of Canada.

Harrison Hot Springs- The Sasquatch Capital of Canada was last modified: May 24th, 2019 by Hammerson Peters