The Komagata Maru was a steamship charted to challenge the Continuous Passage Act.

The 1900 census in Canada indicated that there were over 2000 Indians. Most of them were Punjabis living in Canada.  Even though the number seems low, given the population then, it was enough to alarm the populous (or at least the politicians). Canadians wanted the “brown invasion” to stop. They felt that the growing number of Indians would take over their jobs in factories, mills and lumber yards.  These insecurities led British Columbia to pass laws discouraging immigration of Indians to Canada. Indians had to have at least $200 on them to enter British Columbia.  At an average par rate of  $.10 per day this was a real task.  The Federal government, in 1908, passed into Law “The Continuous Passage Act”.  Which stated that Indians would have to come to Canada via direct passage from India.  Considering the distance from India to Canada, by boat, and the average income in India, these rules and laws were blatant discrimination.

At the same time as the Continuous Passage Act, many other laws were written against Indian, Japanese and Chinese.  They were immigrating in large numbers.  Indians were also denied voting in a 1907 law, prohibited to run for public office, serve on juries, and were not permitted to become accountants, lawyers or pharmacists.

In 1914, a fairly well off Sikh, Gurdit Singh, living in Hong Kong, decided to challenge the law by sending a shipload of Indians to Canada as immigrants.  He charted the Komagata Maru, a Japanese steam ship.  He began selling tickets for the voyage right up until 2 days before the planned departure.  On that day the Hong Kong police arrested him for illegally selling tickets.  They claimed the tickets were illegal and the ship was placed under police guard.

On March 24, 1914, the governor of Hong Kong, who had known Gurdit Singh in Malaysia, released him from custody and granted him leave to sail to Canada on April 4.  The ship upped-anchor that day with 150 Sikh passengers.  They stopped in Shanghai, Moji and  Yokohama where they picked up more would-be immigrants.  When Komagata Maru made it to Shanghai, a German cable company sent a message to the press.  It announced the departure of the steamer Komagata Maru from Shanghai for Vancouver on April 14 with 400 Indians on board.

The news was picked up by British press and The Vancouver Newspaper.

The news of its departure reached the British Columbia authorities. Their instant reaction was that “Hindus would never be allowed to land in Canada.” The Indians who had already settled in Canada had also started to prepare for the arrival of the Komagata Maru. Meetings were held in the Gurdwaras about, on what actions to take. Money and provisions were collected to help the passengers upon their arrival in Vancouver. The entire Indian community in Canada united to fight the opposition.

On May 23, 1914, the Komagata Maru reached Vancouver and anchored near Burrard Inlet. Both the Indians and the Canadian authorities were waiting. The Canadians wanted to send the ship back to where it had originated. The Indians on the other side had lawyers, money and other provisions ready to help.

The Canadian authorities did not let the passengers leave the boat. They claimed they had violated the exclusionist laws. The claim was that the ship had not arrived via direct passage and most passengers did not have the $200 that would have qualified them to enter British Columbia. 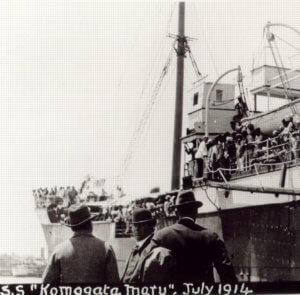