The native peoples of what is now central Canada had a unique way of helping others get to their destination without losing their way.

A young tree prominently situated at a trail intersection or sharp turn had one or more limbs trained to point in a certain direction to aid the  traveler. 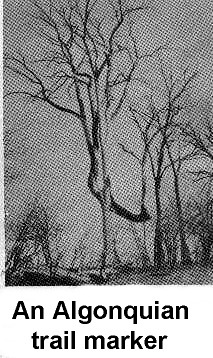 These limbs were bent sharply, partly broken, then tied with raw-hide or wild grape vine, the wound, at the bending was smeared with pitch to aid in it’s healing.

After many years of being “trained”, the limb remained in that permanent position.  The restraints were left to rot away allowing the tree to live out it’s natural life… as a “road sign”.

Bent limb trees still might be seen in Norfolk, Elgin and Wellington counties as well as the Ottawa region.

Take a close look around you, there just might be a surviving bent limb tree in your area.