The British North America Act of 1867, (BNA Act) is now known as the Constitution Act of 1867.  This is the basis of the Constitution Act of 1982, which is Canada’s fundamental law.  It determines the structure of government, the allocation of powers between federal and provincial authorities, and the interpretation of other statutes. It’s operation derived from Canada’s British legacy and legal decisions. The British North America Act was passed by the British Parliament in 1867. It created the Dominion of Canada out of the United Province of Canada. Which became Québec, Ontario, New Brunswick, and Nova Scotia.  It also provided for the entry of other colonies and British possessions into the new federation. The British North America Act originated in negotiations among colonial politicians in 1864. It established a system of government modeled on British parliamentary practice with Britain’s monarch as Canada’s sovereign. The most important sections defined the powers of the federal and provincial governments. In theory giving more authority to the Parliament of Canada.

Over the years, court decisions, compromises, and amendments served to change the provisions of the British North America Act. A series of decisions by Britain’s Judicial Committee of the Privy Council authorized a move away from the centralism intended in 1867. Canada secured full control of its foreign affairs in 1931, as a result of the Statute of Westminster. The Supreme Court became the country’s final court of appeal in 1949.

The 1867 constitution did set up a workable system of government. However, it did not prevent disputes over the division of powers in overlapping areas of authority. Such as taxation, broadcasting, social policy, and language rights. The conviction gradually grew that the constitution required major revision, but efforts to secure provincial agreement on how to amend it repeatedly failed.

In the 1970s, Prime Minister Pierre Trudeau, took up the cause.  Eventually all the provinces, except Québec, endorsed a new agreement, which became the Constitution Act of 1982. This act established an amending formula.  It also added a Charter of Rights and Freedoms. Prime Minister Brian Mulroney attempted to secure Québec’s approval of the new constitution in 1987 with the Meech Lake accord.  The accord required the unanimous assent of all provinces with-in a three-year period. As a result of a new language dispute and English-Canadian concerns over identification of Québec as a “distinct society”. However, the accord was never ratified. The constitutional crisis continued, even after Mulroney forged another compromise among all the parties, when the Charlottetown agreement was defeated in a national referendum in October 1992.

To read more about the BNA of 1867 and what it should have meant to Canadians, check out our section n the Political System in Canada starting with our first installment “Whither Canada?“. 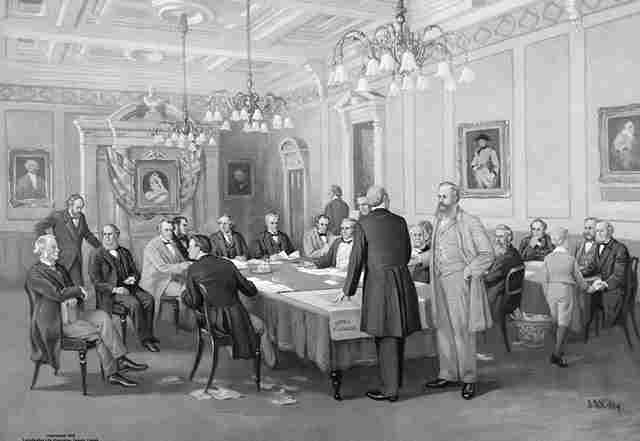