Canada Car and Foundry Company Part 3: The Airplane That Flew… But Never Took Off

In 1944 the Canada Car & Foundry built an aircraft in its Montreal shops designated the CBY-3, also called the Loadmaster.  There were two units built.  The CBY-3 was far superior to the planes of its day (its primary competition was the DC-3 – Dakota), but the CBY-3 got caught up in a web of controversy and was killed less than one year later.To really understand and appreciate this story we need to go back beyond 1945, all the way back to the mid 1930’s and possibly to a gun shot in Miami. Vincent J Burnelli was born in Temple, Texas, on November 22, 1895.

In his early youth, Burnelli showed an interest in aviation.In 1915, Burnelli and a friend, John Carisi, were designing gliders in New York.  By 1915 the two had designed and built their first powered open biplane.  They tested the plane at Hempstead Plains Airfield, which was later renamed Roosevelt Field(remember this name – it will become ironic!).World War I created a demand for aviation designers and Burnelli used the opportunity to establish himself in the aircraft industry.  He worked at various times for the International, Continental, and Lawson aircraft companies as engineer, designer and superintendent.  He designed the first aerial torpedo plane.

As a aircraft designer Burnelli promoted a revolutionary design concept.  He based his design on lift-body theory.  The theory is simple.  A convention airplane design (a tubular body with wings) is designed to carry people or cargo.  The wings provide all the lift needed to carry the drag of the body.  Lift-body design, on the other hand, created the body of the aircraft in the shape of a wing, thus providing lift from the body (get the name?) added to the lift from the wings.  In the terms that any person can understand:  more lift equals a better design.

What if I also told you that thousands of people have died in plane accidents that need not have died had Burnelli’s designs won out over flying tubes.

A good history of Burnelli can be found at: http://history1900s.about.com/library/prm/blvincentbrunelli1.htm

So what does this have to do with the Canada Car and Foundry and a gun shot in Miami?

Let’s tackle the gunshot first.  I warn you that this story has more than a few twists and turns so pay very close attention to the detail and the names involved.  Otherwise you will think that I am wandering.

Burnelli was designing his unique airplanes but few – very few – were actually built.  He was fighting an uphill battle against the established aircraft designers and the big companies that backed them.  He built a better mousetrap but could not get the backers to build them.

In the late 1930’s war was brewing in Europe.  Most every one knew it was inevitable.  The US military-industrial complex was beginning to form. Money was about to flow for military goods including airplanes.  In 1939, the US Army Air Corp held a competition for a new bomber.  The plane had to be capable of low and high level operations, carry a large load of bombs and be rugged enough to take a pounding and return to be repaired.  Burnelli submitted his UB-14B design.  (The UB-14B was a customized version of his UB-14 passenger design.)  There were five other entrants into the competition including Curtis- Wright, Douglas, Lockheed, Consolidated, and North American.   The UB-14B could carry 2000 lbs more bomb load than the design specification, it could take off and land on a smaller (half the length) runway (meaning that the Air Corp could get closer to the front without building big airfields) and the UB-14B was the cheapest to build.  It would cost only one-third as much as the highest bidder, Lockheed and half as much as the next lowest bidder.  The Army Air Corp, quite rightly, selected the Burnelli UB-14B design.  In his 1939 report to the Secretary of War, General H. H. “Hap” Arnold stated… “In my opinion, it is essential, in the interest of national defence, that this Burnelli procurement be authorized.”

After the competition in 1939, Burnelli was invited to the US White House to witness the signing of the UB-14B procurement contract by President Roosevelt.  In idle chatter, prior to the signing, Roosevelt asked Burnelli who his major financial backers included.  Burnelli replied… ” A fellow Texan, Arthur Pew.”  This name sent Roosevelt ballistic.  He refused to sign the contracts, threw his pen across the room and ejected Burnelli from the White House.  (I warned you earlier that the Roosevelt name would become ironic.)  Not only was Burnelli humiliated, for reasons unknown to him at the time, but Roosevelt also directed the Army to issue a new report denigrating the Arnold report.

What made Roosevelt go “postal”?

Arthur Pew was on the board of SUN Oil in Texas and was the major financial  backer of Republican Wendell Wilkie, Roosevelt’s opposition.  But was this enough to make Roosevelt go crazy?

In February of 1933, the newly-elected President Roosevelt was giving a speech in Miami when six shots rang out.  Roosevelt was not injured but the Mayor of Chicago, Anton Cermak, who was standing beside him, was hit in the stomach.

The perpetrator, an Italian immigrant-turned-US-citizen, Giuseppe Zangara, blamed former President Hoover and, by association as newly minted President, Roosevelt for the poor treatment of the working class in the US during the depression years.  He was charged with intent to kill and sentenced to 80 years at hard labour.  Shortly after the trial, Cermak died of his wounds and Zangara was charged with murder, convicted and died in the electric chair.  All this took place within 5 weeks of the shooting.

Roosevelt always thought that Zangara was acting on behalf of others in the crime and not alone as was the official story.

One year after the assassination attempt, in 1934, there was an failed attempt at a political coup against the US government of Roosevelt.  Little is known about the episode.  Although the allegations were confirmed by a congressional committee, the findings were hushed up amid murmurs of a cover-up. In the absence of definitive proof we are left to speculate on the backers of the plot.  The names of big wigs in the Morgan and Du Pont commercial empires, right-wingers – some say Fascists – who were bitterly opposed to Roosevelt’s New Deal and the President’s sympathies toward organized labour, rise very high on the list.  Later the Committee on Un-American Activities under Joseph McCarthy broke the silence in 1947 when they stated, “Sworn testimony showed that the (coup) plotters represented notable families — Rockefeller, Mellon, Pew, Pitcairn, Hutton and great enterprises — Morgan, Dupont, Remington, Anaconda, Bethlehem, Goodyear, GMC, Swift, Sun.”)

Now how does all this apply to Canada Car & Foundry?  Remember them.  They are the title for the story.

In 1941 Burnelli worked briefly as a consultant to CC&F.  Near the end of the war he licensed his lift-body technology to CC&F and designed for them the CBY-3.  The CBY-3 was built based on the UB-14 design and was customized for the rugged Canadian north.  It performed head and shoulders over the Douglas Aircraft DC-3, which was already a 10-year design.  No doubt that the DC-3 was a great plane.  Over 13,000 were built by Douglas or under licence from Douglas.  But the CBY-3 need only half the amount of runway to take off when compared to the DC-3.  The CBY-3 landed in less space, had better fuel consumption and carried over a ton more cargo than the DC-3.  They called the CBY-3 – the “Loadmaster”.  The CBY-3 was a better plane that could be built at a much lower cost.

Well look around you.  How many CBY-3s or Loadmasters have you seen lately?  If you go to the New England Air Museum in Windsor Locks, Connecticut, you will see the only known CBY-3.  It is decaying away in the open air.

At the end of the war, you could buy a surplus DC-3 for $5,000.  How could the CBY-3 compete?  But was the only reason the CBY-3 was not produced?  Did the dastardly American government pressure CC&F and/or the Canadian Government to cancel the CBY-3 project.  (Sounds a bit like the AVRO ARROW project – see the footnote below

But that wasn’t the end of the CBY-3.  In part 4 (link below), we revisit our old friend “Slick” Goodlin and find out what his involvement was with the CC&F CBY-3.

Footnote: I wasn’t going to let out this little fact so early in the series but it is a fact that when CC&F shut down its aircraft manufacturing business, it was bought by A.V. Roe Company – the makers of the AVRO ARROW!

Canada Car and Foundry Company Part 1 – Birth of a Giant

Canada Car and Foundry Company Part 2: Queen of the Hurricanes

This article is part 3

Canada Car and Foundry Company Part 4: The Bomber That Could Have Been 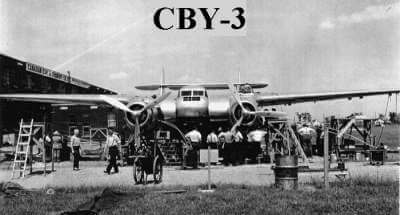