Just today I was reading about a deadly bird flu in Asia.  Last month I went for my annual flu shot.  Seems that no matter where you turn people are talking about influenza or the flu. Something endemic is native to a particular place or always to be found in a particular region, such as certain diseases that neither increase nor decrease but are simply always present there.  Something epidemic is prevalent and spreading rapidly in a particular region or community, like a mild flu .  However something pandemic is omnipresent, spread over a huge area, to be found everywhere – such as the Spanish Flu of 1918. The source of the Spanish Flu Pandemic may never be known (it probably came from China as most flu strains do) but it was first officially recorded in May  1918 in a sleepy resort town of San Sebastian on the coast of Spain, thus the name Spanish Flu.

In fact, the flu had stuck British trenches in France in early 1918 and spread very quickly to the German trenches.  But with the squalid conditions and all the death in the trenches, who had time to name a flu bug.

The Spanish Flu started to make its appearance in North America in September of 1918 and when it had run its course by late 1919, an estimated over 25 million people had been felled by the disease.  (By comparison, 9.3 million soldiers died in the entire First World War.)  It was wide spread.  It was found in large cities, small towns, rural areas and even in the high north where entire Inuit communities were practically wiped out.

People took to wearing masks and staying indoors.  Even the harsh Canadian winter temperatures could not stop the spread of the Flu.  The virus was different in that it affected young adults, who are generally hardy enough to fight off such infections, as well as the very young and very old.

This Flu was so virulent that doctors of the time did not even classify it as an influenza as most influenzas are quite mild.  Some called it bronchopneumonia.  Others thought that it might be a strain of botulism or dengue fever.

There was no specific treatment for the Spanish Flu.  Just as we do today, bed rest, lots of fluids and antibiotics for any ancillary infection.  It had to run its course.

In the end no one knows how many lives were lost worldwide to Spanish Flu. Estimates were between 20 and 100 million.

When I was very young, my grandmother lived in Willowdale, a suburb of Toronto.  I remember at the end of her street there was a small cemetery.  I always wondered at the ages of the people that were buried there.  They were mostly young kids who had died in 1918/19… casualties of the Spanish Flu. 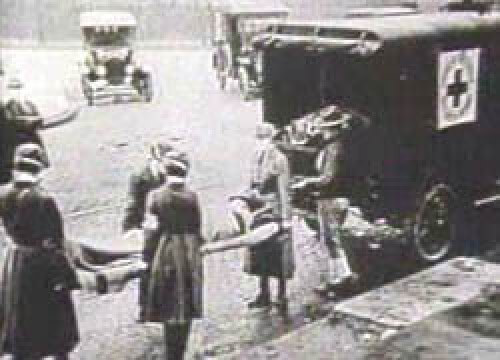 Article Name
The Spanish Flu of 1918
Description
The source of the Spanish Flu Pandemic may never be known (it probably came from China as most flu strains do) but it was first officially recorded in May 1918 in a sleepy resort town of San Sebastian on the coast of Spain, thus the name Spanish Flu.
Author
Bruce Ricketts
Publisher Name
Mysteries of Canada