Who is that walking in our lane? This was a common question between the members of many families in the early twentieth century, especially in rural areas. No matter how remote, inaccessible, or sparsely populated, early settlers of rural Canada came to count on visits by the Syrian Peddler.  He always had a collection of useful and different goods.

These itinerant peddlers with their heavy and often unique back-packs carried their wares to small towns, villages, and the sparsely populated rural outback of Canada.

Their wares were what they could carry, however, they offered different forms of merchandise and a new method of acquisition for the purchaser. The local store, in rural areas could be many, many miles away and was stocked with what was familiar to the store owner and his patrons. The mail-order catalogue again had familiar goods but took many weeks and often months to deliver. Again, the purchaser had to make the trip to the central mail delivery office for pick-up.

The Syrian peddler had his wares with him. Small tools, cooking utensils, sewing materials, fabric, bed-sheets, and dry goods were common, and sometimes foreign produce was also offered. This consisted of spices, pepper and seed. Many purchasers took their chances with seed for Syrian corn with varying results.

As the peddler progressed on his journey, a leather pack could be collapsed to fold into another pack, and the continued trudging became less and less cumbersome. The demonstration of the packs was often a delight to children present at the time.

Depending on the time of day, the peddler was often offered a place to stay. It is estimated that 99% of these offers were from people of the French population. It has been interpreted by some that the French-Canadians were kind and being Mediterranean, had a similar complexion to the Syriac people.

These immigrant peddlers were overwhelmingly of the Christian faith, having emigrated from Mt. Lebanon, a semiautonomous Syrian district, on the Mediterranean’s eastern shore. The very first Lebanese immigrant, Abrahim Bounadere, arrived in 1882, followed by four more in 1883, another ten in 1885, and 50 in 1890. Communication from these in all probability led to future migration.

The Ottoman Empire was under the rule of the Ottoman sultan, Abdulamid. He was adamant at crushing any and all separatist movements being formed by the Syriac people, the Kurds and the Armenians. Since they shared land between southeast Turkey, northern Syria and Iraq, and northwest Iran, Abdulamid played the Kurds against the Armenians who were promoting their own territorial autonomy. This resulted in the Christian massacres of 1895-1896 when estimated hundreds of thousands were slaughtered, followed by the burning of Christian villages and by the rounding up of people in caravans into a forced migration. This ethnic cleansing of Christians continued and between 1915-1918, the Young Turk’s government encouraged the Kurds to attack convoys of Christians, who were evacuated by force from their villages and towns by the regular Turkish troops and police forces, and were allowed to rob and kill them all.

This continued with Mustafa Kamal, Turkey’s new ruler, who used the Kurds again to pressure the remaining Christians in the Eastern parts of Turkey to leave indefinitely.

During World War 1, the Christians of the Near East and Asia Minor were almost annihilated. The “Year of the sword” was given to 1915 in the Christians’ historical memory. The massacre descriptions tell of human savagery that left 1.5 million Christians dead, and village upon village wiped out.

Those who survived the massacres headed to nearby Lebanon and Syria and from there, many migrated to Europe, North America and Australia.

With hopes of a new life in rural North America, the Syrian peddler had an often arduous journey. Many left the ports of Beirut, Mersin or Alexandrette via the ports of Egypt or Cyprus to the harbours of Italy or France; then to Liverpool, England, and from there, they continued to Canada by transatlantic steamers.

Typically, to get to their closest port, they walked, rode animals or carriages, and sometimes used trains where available. By horseback, the first trip would take 10 days. A boat voyage from Beirut to Marseilles, France took six days. Often, they would be held by authorities in Marseilles, on the basis of the fact that some members of the family might have infections in their eyes. There they would be kept with promises of being allowed to continue if they would pay this person or that person. When it was considered that there was no more money to be extracted, they were deemed fit to continue their travel. From Marseilles, they would cross France by whatever means to Calais for the crossing of the English Channel to Dover and then to Liverpool. After Liverpool, there was a six day crossing of the Atlantic to Halifax, and another train trip to Montreal. What might have been a trip to Canada in a little over a month, could often take over a year and a half.

The Syrian/Arab references were cultural and not nationalistic since there was neither an independent Syrian or Lebanese political entity to which nationalism could be tied. Their values blended well with their North American hosts, being as success-oriented and free enterprise-driven.

Arrival in Canada was not as easy as one might think.  The Canadian government selectively restricted immigration.  The first example was the head tax which came into effect in 1885 to limit Chinese immigration, followed in 1907 with the Gentleman’s Agreement between Canada and Japan to hold Japanese immigration to Canada in check.  However, in 1908, two Order in Council rulings restricted Arab immigration.  The first Order in Council excluded immigrants who did not come to Canada by direct continuous journey from their homeland.  The second Order in Council imposed a $200.00 landing fee on immigrants from Asia.  Syrian immigrants were included among other Asiatic groups.

Interestingly, between 1882 and World War II, almost all Arab immigrants to Canada came from Syria and Lebanon and were predominantly Christian.  In contrast, most of post-World War II Arab immigrants were from Lebanon, Tunisia, Syria, Morocco and Jordan, with an excess of thirty percent of these being Muslim.

The 1901 Canadian census counted Syrian immigrants with Turks because at that time, Syria was under Turkish rule.  The five next census from 1911-1951, classified Syrians under a separate class.  In 1961, the class was modified to Syrian-Lebanese, in response to the emergence of Syria and Lebanon as two separate states.  For the last quarter century, with diversification of the Arab immigrants country of origin, Canadian immigration statistics has grouped new arrivals under the country of last permanent residence.

The geographical mobility of peddling that motivated the early Syrian to seek survival in North America, allowed him to earn his keep, return an investment to his sponsor, and finance the plight of a next of kin or bride to be, one penny at a time.  Being allowed to practice Christianity without annihilation was an added bonus to his Canadian territory.

After Montreal, and their wide-spread peddling, some opened wholesale stores to replenish other peddlers merchandise.  Many went where business was good and eventually settled their families in Sherbrooke, Ottawa, Toronto, Windsor, Sault Ste. Marie and North Bay.

Although originally, some thought they would seek a fortune and return to their homeland, very few ever chose to leave North America. 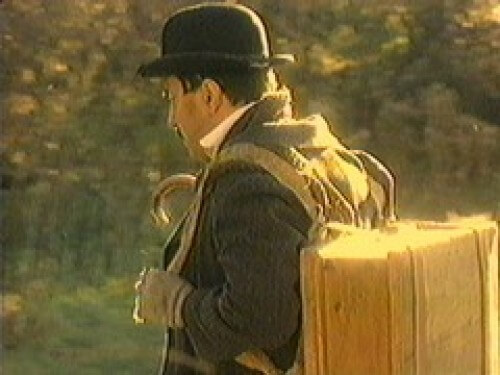