Napi, known as Old Man, is the culture hero of the Blackfoot tribe. Napi is often portrayed as a trickster, a troublemaker, and a foolish being.  But he is a well-intentioned demigod responsible for shaping the world the Blackfoot Indians live in.  He would often teach the Blackfoot people important things. Napi is often helped by his wife, Old Woman (Kipitaki or Kipitaakii in Blackfoot). In many Blackfoot Indian legends both Old Man and Old Woman are involved with coyotes.  Some Blackfoot Legends refer to them as Old Man Coyote and Old Lady Coyote. In other Blackfoot Legends Napi and Kipitaki have nothing to do with coyotes and are explained as the first man and woman made by the Creator, similar to Adam and Eve.

Here is an example of one Blackfoot Legend – Napi The Trickster

One hot summer day, Napi, the supernatural trickster of the Blackfoot peoples, rested on the rock because the day was warm and he was tired. He spread his robe on the rock, telling the rock to keep the robe in return for letting Napi rest there. Suddenly, the weather changed and Napi became cold as the wind whistled and the rain fell. Napi asked the rock to return his robe, but the rock refused. Napi got mad and just took the clothing. As he strolled away, he heard a loud noise and turning, he saw the rock was rolling after him. Napi ran for his life. The deer, the bison and the pronghorn were Napi’s friends, and they tried to stop the rock by running in front of it. The rock rolled over them. Napi’s last chance was to call on the bats for help. Fortunately, they did better than their hoofed neighbors, and by diving at the rock and colliding with it, one of them finally hit the rock just right and it broke into two pieces.Not only does this story explain why the rock is in two pieces, but also why bats have squashed-looking faces.The tale provides helpful caution against taking back what you have given away. 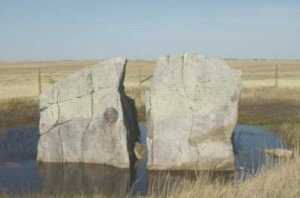 Article Name
Blackfoot Legends - Napi The Trickster
Description
A Blackfoot Legend - One hot summer day, Napi, the supernatural trickster of the Blackfoot peoples, rested on the rock because the day was warm.
Author
Bruce Ricketts
Publisher Name
Mysteries of Canada