Treaty Seven was a peace treaty made between two nations – the tribes of the Blackfoot Confederacy, and the Queen of Great Britain and Ireland.  By Her Commissioners, the honorable David Laird, Lieutenant Governor and Indian Superintendent of the North-West Territories, and James Farquharson Macleod, C.M.G., Commissioner of the North-West Mounted Police. When Treaty Seven was made in 1877, it became the last in a series of agreements concluded between the Government of Canada and the Indians of the North-West during the decade of the 1870’s. Upon it’s conclusion, more than twenty years would pass before another treaty was made. Treaty Seven completed the task which the government had set out to accomplish after it acquired control of Rupert’s Land in 1870. 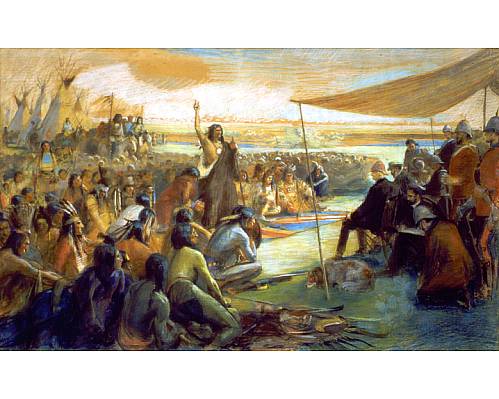 From the government’s perspective, the need for Treaty Seven was immediate and simple. As part of the terms of bringing British Columbia into Confederation in 1871, the Canadian governments had promised to build a transcontinental railway within ten years. Such a line would have to traverse the newly-acquired land still nominally in control of Indian tribes. Huge land concessions would need to be offered to the company building the railway and later, the existence of the line would encourage large scale immigration to the western prairies.

When the British North America Act was passed in 1867, the responsibility for Indians and Indian lands had been vested in the federal government. Further, the government was bound by the terms of the Royal Proclamation of 1763, which recognized Indians as rightful, occupiers of their hunting grounds until such a time as these were ceded to a government authority. This meant that the railway could not be built until the rights of the Indians along it’s route had been settled. Therefore, during the period from 1871 to 1876, the government of Canada had systematically concluded treaties with all tribes in the arable regions of the North-West Territories, with the exception of those inhabiting some 50,000 square miles of land south of the Red Deer River and adjacent to the Rocky Mountains. These lands were occupied by the Treaty Seven First Nations. The Articles of Treaty 7 outlined the areas where the present day Reserves now exist. The making of Treaty 7 occurred at “Blackfoot Crossing” which is located on the Siksika Reserve east of Calgary.

In summary, the Treaty made provisions for one square mile for each Indian family, plus a limited supply of cattle, some farm equipment (one plow for each band) and a small amount of treaty and ammunition money. The treaty also made limited commitments on the part of the Queen to provide education for children and in some cases, medical services.

Article Name
Treaty 7
Description
Treaty Seven was a peace treaty made between two nations - the tribes of the Blackfoot Confederacy, and the Queen of Great Britain and Ireland.
Author
Bruce Ricketts
Publisher Name
Mysteries of Canada