The Maritime Vessel SS Ithaca was built at Trois Rivieres, Quebec in 1922.  Initially built as the Frank Augsbury for Hall Coal & Shipping. She had many roles throughout her life but none could suspect that her death would be her legacy. She was sold for the last time, to the Ithaka Shipping Company in 1960.  She was hired by the Clarke Steamship Company to deliver nickel concentrate from Rankin Inlet.  The ship set sail from Churchill on September 10th, 1960 to collect get some cargo. On September 13/14, 1960, the Ithaca was caught in a gale with winds up to 80 miles per hour.  Her rudder was broken and she was pushed towards shore and onto a reef about 16 kilometers east of Churchill, Manitoba. 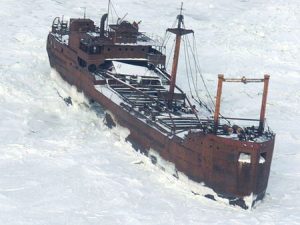 It was high tide at the time of her grounding and when the tide went out, much to the surprise of the captain and crew of the vessel, they could walk the 700 meters to the mainland and safety. 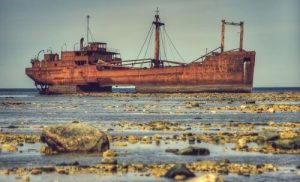 The MV Ithaca has sat upright on that reef since 1960 and today you can walk right out to it, at low tide, to trace the steps of the crew.