HomeNew BrunswickThe Ethyl B Sumner: On Wreck and Mystery

The Ethyl B Sumner: On Wreck and Mystery

In the dark of midnight, November 12, 1912, Ethyl B Sumner struck a ledge near Waterside, New Brunswick, and broke apart. According to a commentary written in The Parrsboro Record in April 1974, “Such was the untimely end of the Ethyl B Sumner by this cruel act of Providence, but danger and sometimes death were always the sailor’s companions in the by-gone days of sail.”

Capable of carrying nearly five hundred ton of cargo, the tern schooner Ethyl B. Sumner was named after the eldest daughter of Mr. F. W. Sumner, the first mayor of Moncton. The Ethyl B was also one of the last large ships to be built at the Turner shipyard at Harvey Bank, located thirty miles down the Petitcodiac River from Moncton. 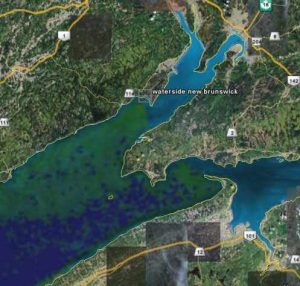 The 353-ton schooner had an overall length of nearly 137 feet and a width of 33 feet. Built in 1901 the Ethyl B. was a splendid sea craft, solidly constructed of oak, pine with iron knees and copper fastened up to the water line.

Captain Caleb Read of Rockport, New Brunswick, who had been with other Sumner-owned vessels before, was given the first command of the tern. Ethyl B Sumner hauled the typical trade in its era – lumber to New York, Boston and other eastern ports. During the winters, it went south in the hard pine trade between Florida and the Caribbean Islands. In 1907, the reliable workhorse made one trip to the Gold Coast of Africa under Captain Beattie.

In the fall of 1912, it was under the command of Wesley Patterson of Shulie, Nova Scotia. It left Shulie with a load of planks for Boston. When off Saint John, the wind changed and as night fell, the Ethyl B Sumner was driven back up the Bay of Fundy. At midnight the schooner struck a ledge at low water off Waterside in Chignecto Bay on New Brunswick’s eastern coast. In the fierce gale, the schooner quickly broke up, ironically about two miles from where it was built.

As the ship fell asunder in the pounding, Captain Patterson and three sailors were swept off the wreck and drowned. Somehow, through the grace of God or some extra store of strength or determination, the cook and two other sailors saw their chance and reached shore.

All four bodies were recovered. The fishermen and seamen of the area saw to that. Patterson and seaman Horace Kates were taken to their homes at Shulie.  The other two seamen were from Sackville.

Captain Al Wilbur, a veteran seaman and captain, lived near Waterside. On that wild November 12 night, he was at Waterside as his schooner was there loading. He recalled the tragedy of Ethyl B. Sumner:
That night I stood on the breakwater and could see Apple River Light and the Cape Enrage Light. I find it hard to understand how the Ethyl B. got in so far at low water. I knew Captain Patterson and he was a mighty smart man.

For years after the tragedy, the name of the ill-fated ship came up in muted conversations of old sea salts. As they gazed longingly seaward, took a deep drag on their pipe, they reminisced of ships, foreign ports of call and of good men gone – brave sailors, long claimed by the sea. Why did the Ethyl B’s skipper make that error? And what of the man Kates? Was he a foreign sailor or a local? It’s sure not a common name in these parts.

Ah, they nodded, the mystery and the magic of the sea. The great enterprise of the lumber trade, now gone with the wind and wave. The ranks of captains and seamen are thinning daily. And the memories fading fast…

This story is the property of: Robert C. Parsons, Researcher, Writer, Historian, and is taken from Robert Parsons’ new book (Fall, 2006) “Shipwrecks of New Brunswick.”

The Ethyl B Sumner: On Wreck and Mystery was last modified: January 22nd, 2016 by Bruce Ricketts