Eskimo Remedy – The most unusual old remedy for an illness that I’ve come across in researching Newfoundland historical records involved an Eskimo woman’s treatment for blood poisoning. While her remedy appears to be rather odd, it certainly worked and it saved the life of a young boy from Trinity Bay.The boy was accompanying his father on a fishing trip to the Labrador Coast when the incident occurred. He got a hook caught in the palm of his hand. He removed the hook but failed to clean the wound properly. Shortly afterwards his hand swelled and a dark color began spreading up his arm. The arm had become blood poisoned.
There was no doctor on the coast at that time, but the skipper knew of an old Eskimo woman 40 miles away who possessed the knowledge of ancient Eskimo practices. 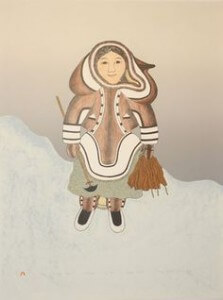 The woman viewed the injury and the condition of the boy’s hand, then assumed command of the situation with great confidence. She ordered the boy to remove his coat and roll up his sleeves. She then ordered one of the men to go outside.

Using a knife, she lanced the wound quickly before the boy could protest. Using the same knife, she cut through the back part of the hen’s breast bone; then she straightened out the boy’s fingers and inserted the whole hand into the body of the hen through the open cut. She then bound the hen tightly over the hand and told the boy to sit still for awhile. The boy’s father was surprised and astonished at the result. The dark color in the boy’s arm retreated towards the hand. When it disappeared the hen died. The old lady then ordered the men to bury the hen deeply so the dogs couldn’t get at it. She noted that if the dogs ate the hen they would become poisoned and die.

Meanwhile, the boy was cured and after a few days he was ready to resume work helping his father.

This story is extracted, with permission, from Jack Fitzgerald’s book, Strange But True Newfoundland Stories. Some editing of the original story has taken place.