The Vikings in North America

Ah, the Vikings.  Those ruthless men and women who plundered far and wide. Returning home to Norway only after their holds were filled with ill-gotten booty and damsels in distress.Is this the way you understand the Vikings?  Would it surprise you to know that the Vikings were some of the best and most prolific explorers of their day?

Our story begins not in Norway but rather in Iceland in 982 AD.  A Norwegian-born settler (yes the Vikings were also farmers!), Eirik the Red, is involved in a feud with some neighbors and ends up killing two of the neighbors’ sons.    In 986 (4 years, so much for quick justice) he is banished from Iceland and sails off  to find new land. 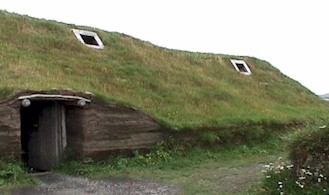 Eventually he lands at a place, now called Eiriksfiord, in Greenland.  It is here that Eirik and his band of merry Vikings establish their community base.  With Eirik are his four children.  Of his brood, Leif, soon to be named Leif the Lucky, was bitten by the exploration bug.

At the same time as Eirik leaves Iceland, a young Viking named Bjarni Hejolfson sets sail, also from Iceland, to visit his father who already lives in Greenland.  Unfortunately, Bjarni is caught in a bad storm while at sea.  When the sky clears it is obvious to him that he isn’t in Greenland (psychologists now call this the “Dorothy-not-in-Kansas” revelation). 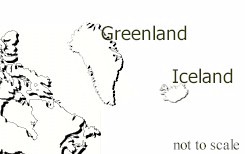 Rather than the great fiords and distant mountains and glaciers he was expecting, he sees a low-lying coast line covered with trees.  As any good son who is already late for Father’s Day would do, he left the area immediately (without exploring or even landing on the shore)  sailing north for two days past more coastline and trees.   He continued on for three more days ultimately running into mountains and glaciers, but no fiords.  Figuring that he must have overshot Greenland during  the storm, Bjarni sailed northeast for four more days and landed just in time for dinner with good old Dad.

He told the settlers of his trip and the new land he sighted.  Guess who listened in on the stories?  None other than – Leif Eirikson – aka: Leif the Lucky.

On or about 1001 AD, Leif, with Bjarni at the helm, set sail from Greenland to find the lands described by Bjarni, by back-tracing Bjarni’s steps.  On the first leg of the journey he found a location with flat stones and glaciers.  He called this Helluland , which meant “Land of Flat Stones”.   Historians now believe that this was the coast of Baffin Island.

He sailed south for three more days and came across a narrow white sandy beach which stretched to the horizon. Behind the beach lay forest-clad slopes.  He called this location Markland or “Land of Woods”.  This is believed to be the forty mile beach at Cape Porcupine on the coast of Labrador.

Following two more days, he sailed into a natural harbor and a land of gassy meadows.   He  found (what he believes to be) wild grapes in the vicinity and called the place Vinland.

Here in Vinland, Leif and his crew set up camp and eventually built a settlement.   Archaeologists and historians are in general agreement that the site of Vinland is now called L’ans aux Meadows in northwestern Newfoundland.

Vinland was inhabited by a series of explorers, including the brothers and sister of Leif, for the next seven or eight years.

The story of the Vikings in Newfoundland is well documented and great reading.   The uncovered ruins of the Vinland community at L’ans aux Meadows can be visited near St Anthony (pronounced “Sane Ant knee” by the locals) at the tip of the Western Peninsula on Newfoundland.

One interesting note to this story is that the Vikings during their stay in Vinland were the first Europeans (don’t forget their roots to Norway) to meet the native peoples of North America.  It is not for sure but some historians believe that these natives were Beothuk Indians who are the subject of another Mystery of Canada.

9 Responses to “The Vikings in North America”

You must travel to NEWFOUNDLAND the adventure is fantastic. But, beware you may not want to leave. I was there in Aug.2018 and I didn’t want to leave.

Tks for that comment, great to know u enjoyed your visit here, welcome back anytime, God Bless

when did the vikings left canada ?

Marina, they left long before the name Canada was heard of over 1000 yrs ago

[…] you are interested, the Vikings settled in North America around 1000 AD and the Scots arrived in New Scotland in 1389. Columbus […]

As I understand it, the Portuguese were fishing the Grand Banks prior to Columbus. He and an uncle made trips to Greenland for narwhal horns, and Portuguese traded there, as well. the Portuguese fished, but also took slaves. Most coastal Native Americans were pacifistic, at least up to a point (the Vikings have a saga about being wiped out by them after killing so many). Slaves brought a greater return than cod, with less trouble. Ancestors (Lenape) have stories of slave raids long before Cabot encountered them. there’s an old, macabre joke that so many Native Americans went to Portugal from the Americas they were going to apply to the Us for reservation status.

Very true the portuguese did fish the grand banks before john cabot came, portugal has maps of island of newfoundland, mind a little different in shape than today lol, but i think dated in late 1300s, make one think did cabot somehow get his hands on one & knew where he was sailing? i know my forefathers on dads side came from portugal to settle in nl in 1700s,& i”m sure their forefathers fished the g banks before them

Just a quick note to correct a discrepancy here: L’Anse Aux Meadows is on the western side of the island of Newfoundland, yes, but the peninsula on which it is located is the Northern Peninsula.