If rumors, legends and gleaned bits and pieces of information have any substance in fact, then the largest hoard of pirate treasure in Nova Scotia, and perhaps the world, lies hidden somewhere at Black Hole Harbour.

I have been visiting Black Hole Harbour off and on for over twenty years, first drawn by an editorial about gold coins found there and the strange marking engraved on large stones. During my visits I have talked to the locals and on several occasions treasure hunters with whom I have exchanged information. 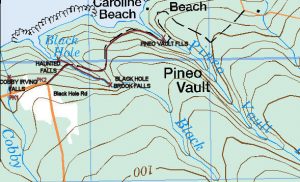 If you walk the old overgrown road to Black Hole, you will eventually come to a stream. Following this stream to the left will bring you to the top of the Haunted Falls. From the beach you can find the Haunted Falls by following the stream back about one mile until you come to a high water fall in a narrow gorge. This area was once used by smugglers in the rum running days and evidence suggests that smugglers still use it.

The falls provided Norwegian pirates with a safe and easily accessible supply of fresh water. That along with using the beach as a dry dock to service their vessels led them to making a base camp here and establishing one of the few Pirate’s Banks in the world.

Though it is well know fact that an American vessel’s crew excavated a chest from the top of the falls in the 1960’s, this was just a drop in the bucket compared to what was hidden there.

One intriguing thing about the falls was that there was once an easily accessible path down from the top. Halfway down this path was a flat area containing two stones supporting a third stone. If you looked through the hole made in the center of these stones you saw an upright stone shaped like a railway spike. Between these stones was a square stone chimney buried under, but with the top level with, the top of the earth. The inside of this chimney was packed with soft earth and seemed to go quite a long way down but was too hard to excavate by hand to
really tell. Why a chimney was built into the side of the falls is a mystery. Sometime in the late 1970’s a portion of the falls collapsed and completely buried this structure.

Somewhere between Black Hole Harbour and Baxter Harbour, about halfway, is a large mound of earth carved out by the sea. At low tide you can see a slit in this mound, about four feet up. This slit is hollowed down inside about 14″ and filled with flat stones. Each stone is engraved with mysterious markings which remain undecipherable.

Where is this Pirate’s Bank? If I knew I would be making a withdrawal but here are the clues. About 200+ years ago Norwegian Pirates set up one of the world’s safest banks at Black Hole Harbour. This is the story given me by a treasure hunter. Somewhere in Black Hole Harbour, likely between the Haunted Falls and the beach where the gold coins were found, is a place off shore that is very deep and always under water. Here the Norwegian pirates stored their chests. Once a year the tide was low enough to allow divers to descend into the bank and retrieve the chests. At all other times the deposits were safe in a deep hole in the bottom of the bay. Remember there was no scuba diving gear in those days, but why only once a year the dive could be safely made I do not understand.

I have often wondered why they haven’t found the treasure. Perhaps silt has filled the hole in, perhaps strong tides have broken the chests open and washed the coins away. Then again, perhaps the treasure was found and secretly removed. 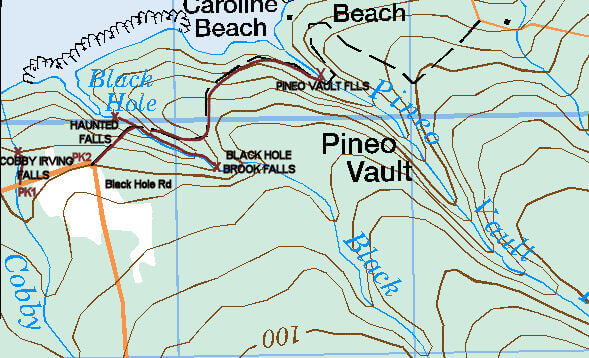 The money pit is just a big sinkhole that some people threw garbage in. lets face it nothing of value ever came out of there. we have machinery that could bore through anything even solid rock and even metal so why can’t they bore down that hole and put a camera down and have another look.
I heard someone put a camera down to have a look and saw what look like to be a hand and a chest, foolishness. I was a believer but common sense took over. I must say I did enjoy all the stories that were told about oak island and the feeling I got when I did more and more research. I hope you all have just as much fun as i did. Thanks for reading