Dr. Benjamin Lewis, son of Ebenezer, was born Sept 21, 1701 at Wallingford, Connecticut. Benjamin was married twice (first wife unknown) and had a total of sixteen children. In his will dated Sept 1, 1788 he mentioned his second wife, Mary Maltbie and daughters Elizabeth, Ester, Hannah, Mary and his sons, Bela, Benjamin, Barnabas, Amassa and Caleb. Benjamin died on January 31, 1789 at Chesshire, Connecticut.

Caleb Lewis, son of Benjamin Lewis was born in Wallingford, Connecticut, May 22, 1736. He married Abigail Moss on March 13, 1760. Abigail Moss was the daughter of Benjamin and Abigail-Cole Moss. Caleb Lewis apparently refused to take part against the British Crown in the Revolutionary War of the Colonies. Caleb was arrested because of his Tory sympathies. His property was confiscated, his family broken up. Caleb escaped from prison with John Fordice. He was taken away from the dead body of his wife (reason for death unknown). For eight days these two men lived on roots and berries. On one occasion, hiding in the dense branches of a friendly tree they saw troopers who were searching for them. As the troopers rode by Caleb and John heard them swearing and threatening to shoot the fugitives at sight. 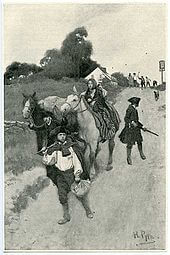 They walked through Maine to freedom in Nova Scotia, Canada. 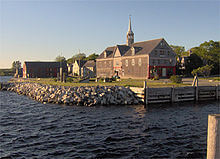 Shelburne Nova Scotia was a popular destination for Loyalist Refugees

Caleb Lewis dared not write home to his family as he was an United Empire Loyalist.

When the Revolutionary War ended, Caleb Lewis and John Fordice returned to the new United States for their families.

John Fordice, found that his wife (name unknown), thinking he was dead, had married again. John did not upbraid her. It was her choice to remain with her wealthy husband in his fine home or return with him to frontier hardships. She chose her first love and returned with John Fordice to Nova Scotia, Canada. John took back with him his two unmarried daughters named Lois and Martha. Lois afterwards married Daniel Holmes of Half Way River.

Jesse Lewis (born Dec 30, 1760 in Wallingford Connecticut) lived on the Lewis homestead in Half Way River, Nova Scotia, Canada. He was confirmed in St George’s Church by the Bishop of Nova Scotia on Aug 10, 1779. Before the Union Church was built, Jesse opened his house for the services of the Church. He, with due authority, officiated at the services of worship, ceremonies of marriage and burials. Jesse Lewis was a leader in starting the Union Church at Half Way River.

Bruce’s notes:  I received this information in an email recently.  I initially asked myself why it qualified as an entry in Mysteries of Canada.  Then it dawned on me.  From the beginning of this site in 1997, I have always maintained that this was a History of Canadians and not a History of Canada.  What Canadians (and others) did before us, makes us, and our country, what it is today.  What we do today will mold our grandchildren and their country.