HomeNova ScotiaDrilling Down on Silence in the Dark- The Curse of Oak Island: Drilling Down; S1E2

Season 1, Episode 2: Drilling Down on Silence in the Dark

Host Matty Blake sits down with Rick and Marty Lagina to discuss Harvey Morash and Michael Gerhartz’s unsuccessful attempt to dive to the bottom of Borehole 10-X. Rick expresses his frustration at the number of failed diving attempts, while Marty acknowledges the technical difficulties inherent in 10-X dives.

The three men briefly talk about the alleged ‘Roman sword’ introduced in Season 3, Episode 10, before returning to Morash and Gerhartz’s diving attempt in 10-X. Behind-the-scenes footage reveals that Morash, unable to communicate with the men and women on the surface, inexplicably disappeared into 10-X for more than half an hour, much to the distress of the Lagina brothers waiting anxiously on the surface. Marty explains to Blake that protocol was broken during the dive, although he does not assign blame to anyone in particular. 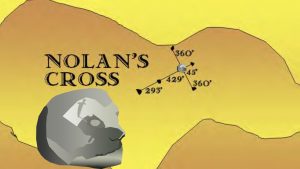 Next, Bake reminds viewers of the long-time rivalry between treasure hunters Fred Nolan and Dan Blankenship, and of the tentative peace pact brokered by the Lagina brothers in Season 3, Episode 7. A pre-recorded video shows a conversation between Fred Nolan and Rick Lagina regarding the former’s discovery of Nolan’s Cross and the so-called “Head Stone” located at its centre.

After the video has finished playing, Blake interviews Dan Blankenship’s son Dave, asking him about the rivalry between Nolan and his father. Dave states that the rivalry was already well established by the time he arrived on Oak Island in 1974, and that it has “just gotten worse over the years.” He states that Dan and Fred are both very alike in their stubbornness, intelligence, and competitiveness, and does not really understand their inability to work together. He also reveals that Dan once “took a rifle after” Fred, and subsequently had it confiscated by the local RCMP. Dave goes on to declare his support for Rick and Marty’s efforts to “bury the hatchet” between the two veteran treasure hunters, but suspects that his father is none “too appreciative of it”.

The next scene shows Matty Blake sitting down with the Lagina brothers and Dave Blankenship. The Lagina brothers follow up on Dave’s interview by stating that, while there is certainly an altruistic motivation behind their attempt to heal the Blankenship-Nolan rivalry, they also hope a reconciliation between the two treasure hunters will give them access to areas of interest on the island. Following that, the four men briefly discuss Fred Nolan’s so-called “Old Well”, which they explored via drilling in Season 3, Episode 8.

A brief video plays in which Oak Island historian Charles Barkhouse talks about the guided tours he and a handful of volunteers conduct on Oak Island each summer, and The Curse of Oak Island’s positive effect on visitor attendance. Afterwards, Dave Blankenship and the Lagina brothers discuss the various benefits and drawbacks of the show’s popularity.

Next, Blake asks the three men a series of questions from the show’s fans. Marty answers the first question, which inquires as to why the Lagina brothers took so long to start exploring Oak Island following their purchase of it in 2007, by explaining that Oak Island treasure hunters are required to purchase a Treasure Trove licence in order to keep 90% of whatever treasure they happen to find (the other 10% going to the government of Nova Scotia), and that it took some time for them to acquire that licence. The second question asks how fans of the show can help with the treasure hunt. All three men agree that the best way to do this is to email Oak Island Tours Inc. their theories, and put an ‘X’ on the map. The third and final question, directed specifically towards Dave Blankenship, asks whether or not it is hard to believe that pre-1795 treasure hunters managed to construct an elaborate underground tunnel system beneath Oak Island without the aid of modern technology. Blankenship maintains that the notion is, in no way, incredible, citing the existence of a 14th Century coal mine located five miles off the coast of England in the Atlantic Ocean as evidence of men accomplishing a similar feat with more primitive technology. 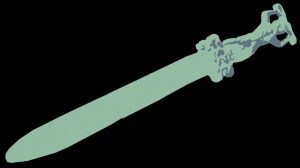 The next scene is a pre-recorded video showing members of the Oak Island team examining and discussing the ‘Roman sword’ introduced in Season 3, Episode 10. Charles Barkhouse states that the sword is “supposedly” a ceremonial gladius, or short sword, “presented by the Emperor Commodus in honour of the secutor gladiators” sometime in the 2nd or 3rd Century A.D.

After the video is finished playing, it is revealed the Craig Tester has joined Blake, Blankenship, and the Lagina brothers at the table, and that he has brought the ‘Roman sword’ with him. Marty tells Blake that, although he is skeptical of the sword’s authenticity, he wants to believe in it and a potential Roman connection to Oak Island, as he and Rick, with their paternal Italian ancestry and their Croatian pedigree on their mother’s side, have Roman blood. Before the show ends, Craig Tester points out a number of anomalies in the sword that hint at modern tampering.

In this episode of Drilling Down, Dave Blankenship states that it is not at all unbelievable for treasure depositors to have constructed an elaborate tunnel system beneath Oak Island with primitive technology, referencing a 14th Century English coal mine dug five miles out into the Atlantic Ocean. 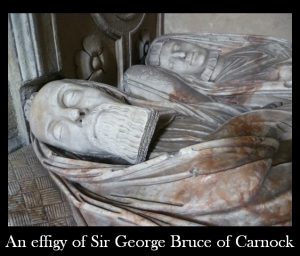 Perhaps the best examples of early sub-thalassic mines are the undersea coal mines designed by Scottish engineer Sir George Bruce of Carnock in the 16th and early 17th Centuries. The first of these is the Castlehill shaft, which exploited a coal seam than ran beneath Scotland’s River Forth. In order to ventilate the underwater mine, Bruce built an artificial island in the middle of the river and sank a shaft through it. Bruce’s underwater mine garnered much attention, and in 1617, King James VI of Scotland (aka James I of England) asked for a tour. When the King emerged from the shaft on the artificial island, surrounded by water, he accused Bruce of treason and attempted regicide. Only after Bruce pointed out a nearby rowing boat were the king’s fears allayed.

Drilling Down on Silence in the Dark- The Curse of Oak Island: Drilling Down; S1E2 was last modified: October 13th, 2018 by Hammerson Peters
Post Tags - Oak Island