The Curse of Oak Island: Season 6, Episode 17- Clue or False

The Curse of Oak Island: Season 6, Episode 17- Clue or False

The following is a Plot Summary and Analysis of Season 6, Episode 17 of the History Channel’s TV series The Curse of Oak Island.

While Laird Niven dismantles the slipway at Smith’s Cove, the rest of the Oak Island crew meets in the War Room with surveyor Steve Guptill. Guptill, having completed the task he was charged with the previous episode, shows the treasure hunters an extremely cluttered diagram depicting all the shafts and drillholes that have been sunk in the Money Pit area. He then explains that the combined data helped him to pinpoint what he believes to be the location of Shaft 6 (a.k.a. the Oak Island Association Shaft #2; an older searcher shaft connected to a tunnel which intersected the original Money Pit). Intriguingly, Guptill’s Shaft 6 tunnel corresponds perfectly with the data extracted from drillholes IJ5.5 and K5.5. The treasure hunters agree that they ought to sink a caisson at the place where Guptill’s map indicates the Money Pit met the Shaft 6 tunnel. 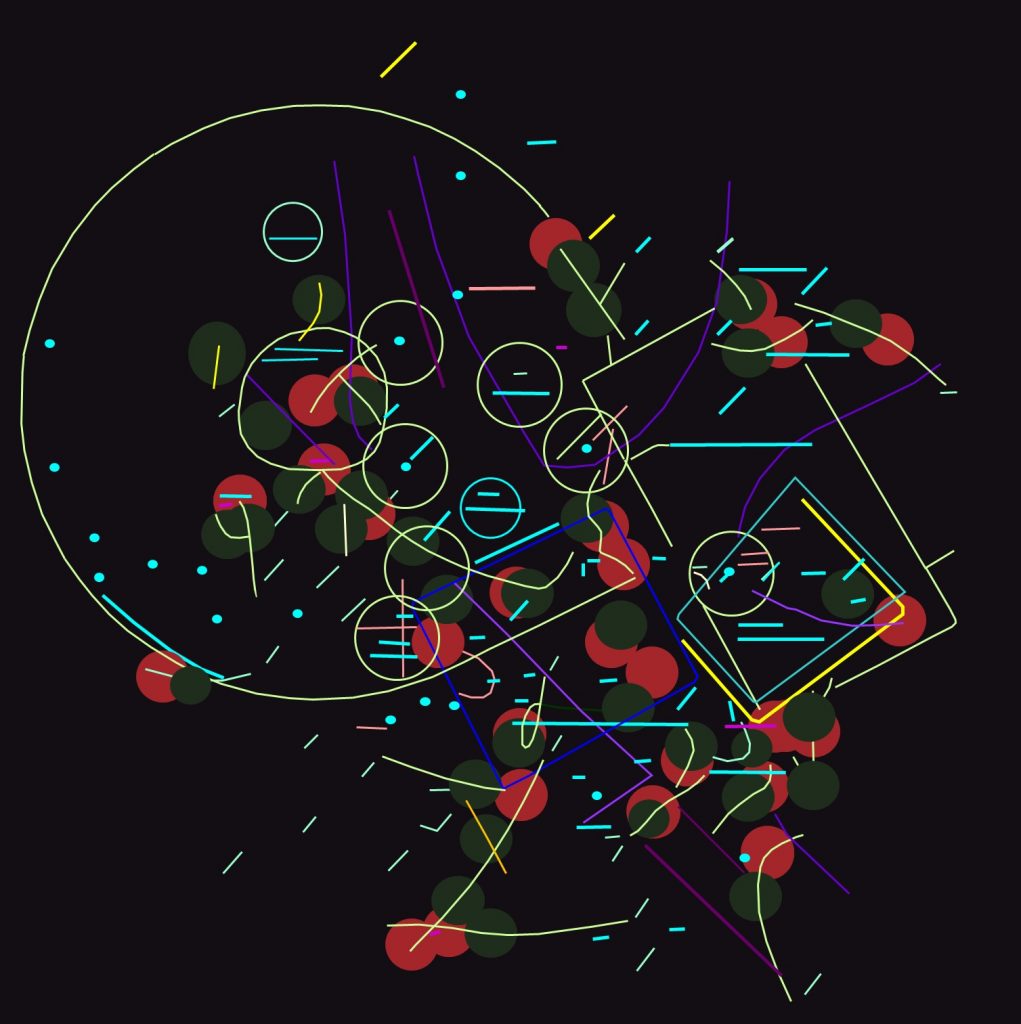 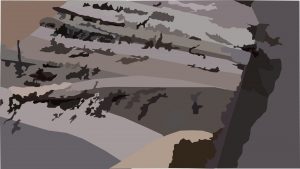 That afternoon, Gary Drayton and Jack Begley head to Smith’s Cove, where Laird Niven has dismantled a section of the slipway. They proceed to metal detect the freshly-uncovered area and discover an undefinable clump of material which reads as ferrous. That accomplished, Billy Gerhardt removes one of the slipway’s two large side timbers with his backhoe before digging the earth beneath it. The earth he removes is taken to the wash plant for cleaning.

Once the earth from beneath the slipway is cleaned and sorted into piles, Gary Drayton and Jack Begley search through it with a metal detector. Drayton quickly discovers a silver coin which he suggests might be a Spanish 1 real. The treasure hunters show the coin to Rick Lagina, who observes that it has a milled edge– an indication that it is likely no older than 1730 .

The next day, the treasure hunters prepare to sink a caisson, dubbed ‘S6’, at the spot where Steve Guptill’s diagram indicates the confluence of the Shaft 6 tunnel and the original Money Pit once lay. “We’re about to begin on probably the most important excavation on Oak Island this year…” says Marty Lagina of the operation in a later interview. “We think we’ve focused in on the most likely spot in the Money Pit to find some actual treasure.” 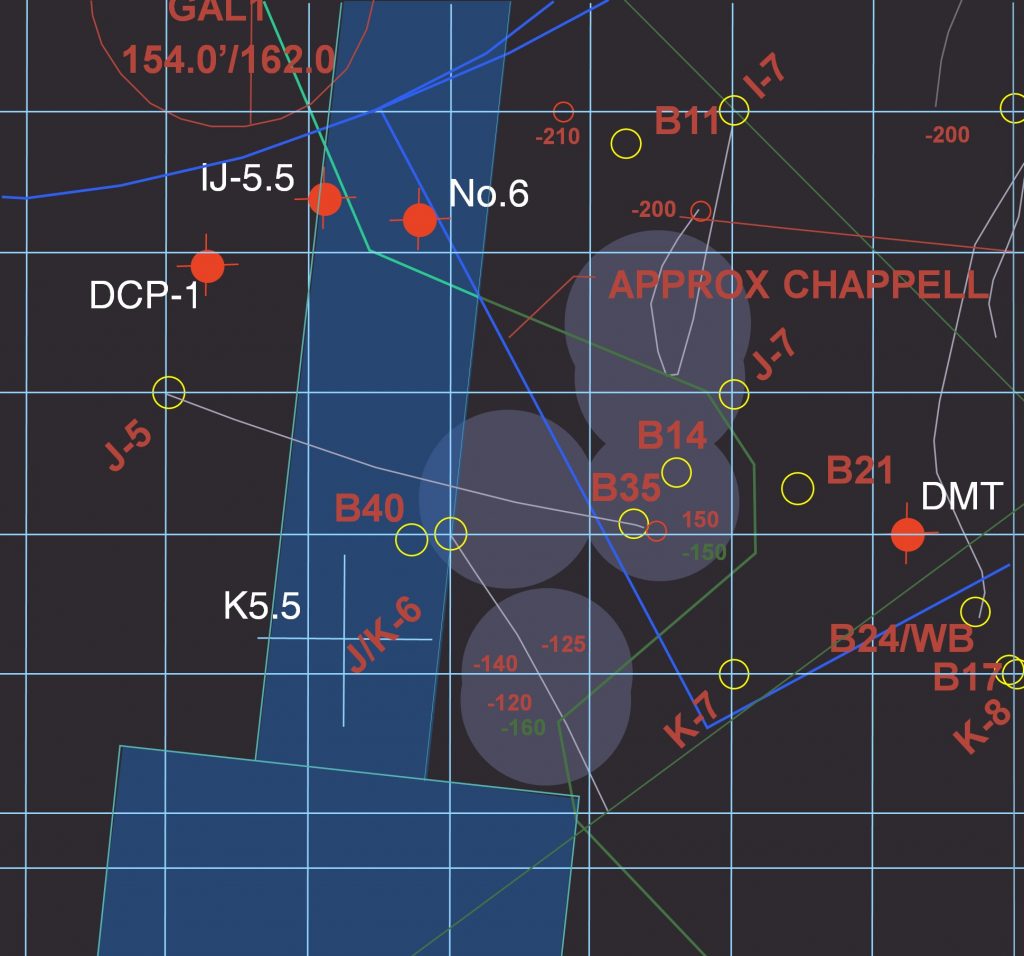 An interpretation of Steve Guptill’s diagram of Shaft 6 and its tunnel. 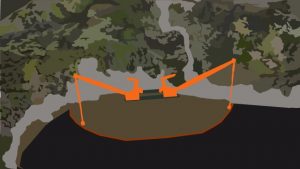 That afternoon, Rick Lagina heads to Smith’s Cove, where he meets with geophysicist Mike West. West, equipped with his deep-penetrating EM61 Metal Detector, begins to scan the entirety of Smith’s Cove for any sign of metal. The detector gets five hits, each of which West marks with a pink flag. The geophysicist tells Rick that one of the targets, located next to the crane pad, appears to be particularly large.

The next day, the Oak Island crew congregates in the Money Pit area, where the sinking of the S6 shaft is underway. At a depth of around 78 feet, the hammergrab brings up 6’’x6’’ timbers, which Doug Crowell identifies as shoring from the Chappell Shaft.

At a depth of around 95 feet, the hammergrab brings up boulders and hard earth, which geologist Terry Matheson declares are indications that the caisson is now in undisturbed, or “in situ”, soil. Shortly thereafter, when the shaft reaches a depth of 101 feet, the caisson cuts through soft material, which Marty Lagina hopes might be the roof of the Shaft 6 tunnel. In order to determine whether this is truly the case, the team transports that particular hammergrab load to a wash table and washes it by hand. The load yields several pieces of thick wooden sheeting different from the materials used in the construction of the Chappell Shaft. Shortly after discovering the wooden boards, the treasure hunters pick out several large scraps of what appears to be leather. “If there’s leather there, humans were there,” remarks Rick Lagina. “And you can date leather, to a degree.”

“You gotta find a little leather before you find the gold,” an enthusiastic Doug Crowell states as the caisson sunk deeper. “If that ain’t a saying, it should be!”

At a depth of 110 feet, below the location of the suspected Shaft 6 tunnel, the hammergrab brings up several very large chunks of axe-hewn oak. Terry Matheson observes that the ends of some of the timbers are encased in clay, indicating that they may have served a structural function. In a later interview, Rick Lagina remarks that these timbers constitute the first oak they’ve found on Oak Island and suggests that they might be part of the original Money Pit, which was said to contain platforms of oak logs. 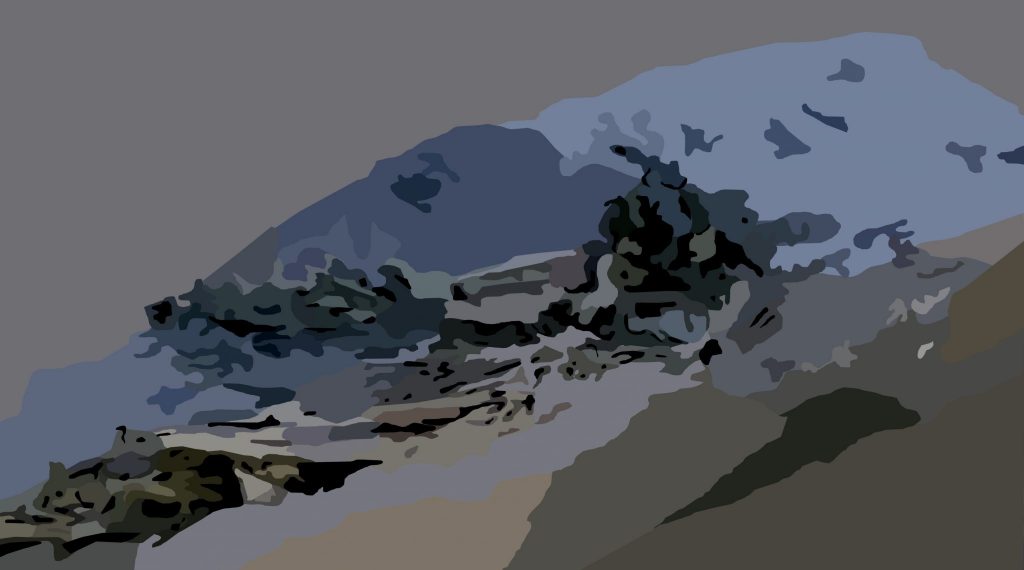 An interpretation of the oak timber brought up from Borehole S6.

While the treasure hunters marvel at the new discovery, Gary Drayton says that, to him, the oak timbers strongly evoke ships’ timbers. “I’ve been on beaches after hurricanes in Florida,” he explains, “and parts of the wrecks have washed up, and this is exactly what they look like. Ships’ timbers.”

The next day, Jack Begley, Doug Crowell, and Paul Troutman sift through the spoils from the bottom of Borehole S6 on a wash table. Jack Begley discovers a piece of iron chain, evoking a similar object discovered by Dan Blankenship at the bottom of Borehole 10-X. The narrator then attempts to connect the chain, as well as the pieces of human bone recovered from Borehole H8, with the legend that the original Oak Island excavators buried slaves alive at the bottom of the Money Pit in the hope that their ghosts would guard the treasure. 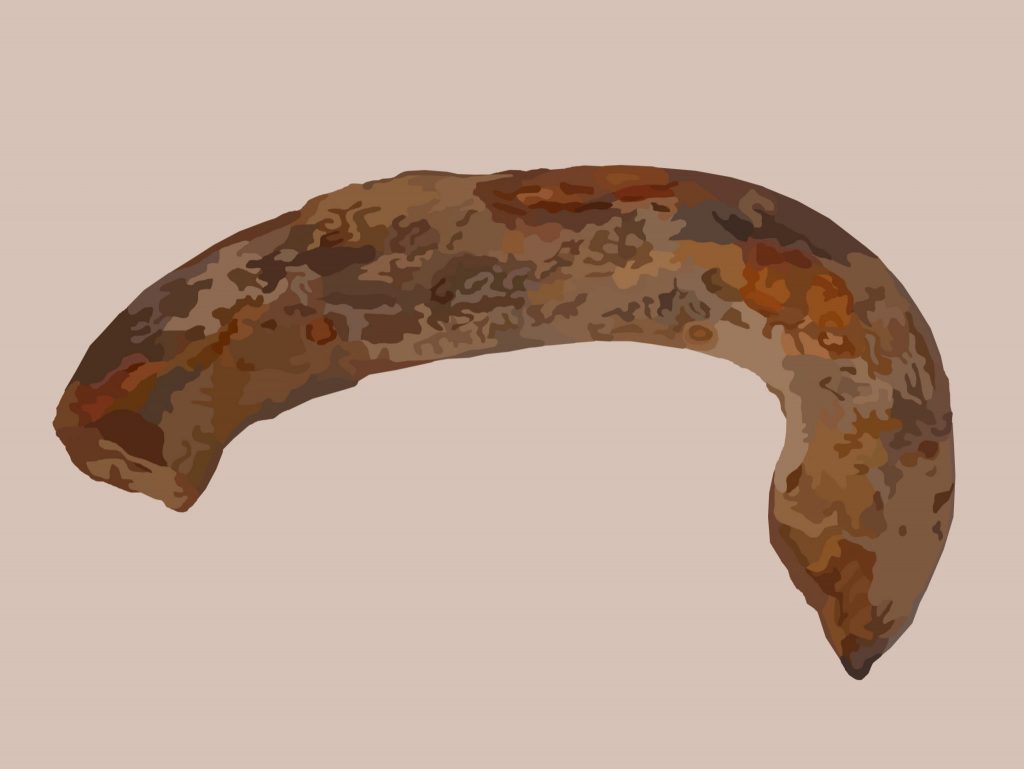 An interpretation of the piece of iron chain discovered in the S6 spoils.

After weighing in on the chain, which suggests might have been used in a pulley system, Gary Drayton joins the three treasure hunters in their search through the S6 spoils. Shortly thereafter, Doug Crowell discovers a small piece of what appears to be bone.

In this episode, the Oak Island crew sank a shaft, called S6, at a location prescribed by surveyor Steve Guptill. Having compiled and analyzed previous survey data, Guptill believed he had determined the location of Shaft 6 and the tunnel which led from it to the original Money Pit. Borehole S6 was sank near the hypothetical confluence of the tunnel and the Money Pit, where some of the Money Pit’s contents are believed to have slid following the Pit’s collapse in 1861. 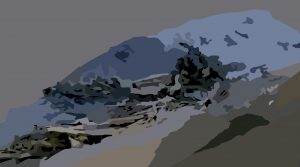 An interpretation of the oak timber brought up from Borehole S6.

Near the bottom of the shaft, several feet below the suspected location of the Shaft 6 tunnel, the crew found several very large axe-hewn oaken timbers. These pieces constitute the first pieces of oak found by Oak Island Tours Inc. on the island. The crew speculated that the timbers might be the remains of the oak platforms which were said to lie in the Money Pit at 10-foot intervals. Gary Drayton observed that the beams resemble the timbers of old sailing ships, implying that the original Money Pit builders dismantled their own ship and used its timbers to construct the Money Pit and conceal evidence of their presence on the island. 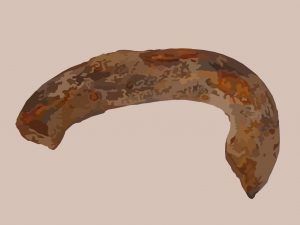 An interpretation of the piece of iron chain discovered in the S6 spoils.

In the spoils of the S6 debris, Doug Crowell found a broken link of hand-wrought iron chain. This find evokes the chain discovered by Dan Blankenship at the bottom of Borehole 10-X, as well as the legend that the original Money Pit builders chained slaves to the bottom of their shaft and buried them alive so that their ghosts would guard the treasure.

One Response to “The Curse of Oak Island: Season 6, Episode 17- Clue or False”

If the three bones(so far)are dated to the 14th century they are from the three Templars who were burned at the stake by king philip 1V 0f France on the morning of 1307 AD in an agreement by Pope Clement who was informed by the king that they were guilty of an abomination. The bones were secretly picked up that same night by Templar survivors who took them along with other artifacts(sacred=to them)to the port of LaRochelle; From there some two dozen templars sailed to Scotland, a safe “harbour” for them because the country was under church excommunication, and more important it was the home of a number of Scotish Templars, notably members of the Sinclair family The location of Oak Island was previously known to a number of mariners(ships’ Captains of France, England(Saxons) and possibly Portugal. The information, not shared with European Monarchies for a reason, was transmitted to them by the Vikings after their excursion to Newfoundland in 1000 AD. Oak Island also has a number(2) of illiterate Runnic graffiti(sic) and a Viking-pendent/coin, dated to the 11th century was found in 1957 by an archaeologist while he and his team were excavating a native site in Maine. Philip Paquet