The following is a Plot Summary of Season 6, Episode 19 of the History Channel’s TV series The Curse of Oak Island.

Rick Lagina, Doug Crowell, Paul Troutman, and Terry Matheson stand by at the Money Pit area and oversee the excavation of Borehole GG1. Oscillator operator Danny Smith informs them that the caisson has reached a depth of 111 feet, and that “the oscillator pressure is the highest it’s [ever] been…” Matheson ponders over the possible subterranean media that could impose such a high torque pressure on the oscillator.

While they wait for their contractors to determine what sort of material the caisson is biting into, the Oak Island crew members examine some of the timbers that GG1 has yielded. Some of the beams appear to be oak- an indication that they might have belonged to the original Money Pit. 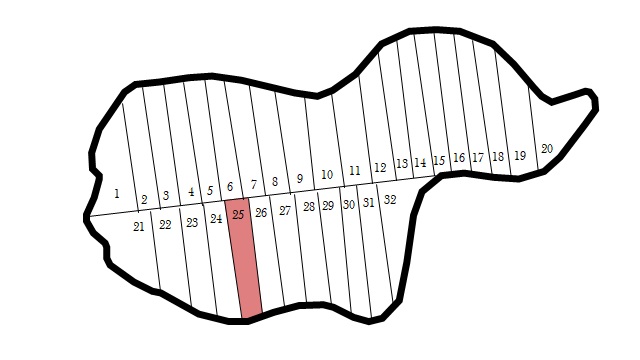 Later, Gary Drayton and Jack Begley go metal detecting on Oak Island’s Lot 25. First, they discover an old iron lock plate from a box or a chest, evoking the keyhole plate discovered on Lot 8 in Season 5, Episode 15. The narrator then suggests that the artifact might have belonged to either Samuel Ball or Captain James Anderson, the latter being an 18th Century American privateer and British spy who once owned Lot 26, and whose sea chest the Oak Island team examined in Season 5, Episode 2. 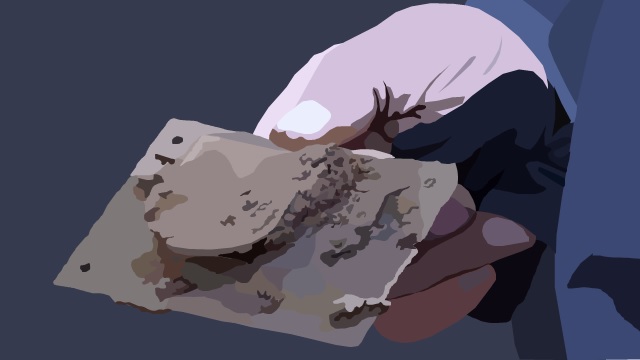 An interpretation of the lock plate discovered on Oak Island’s Lot 25.

Back at the Money Pit area, Rick Lagina, Craig Tester, and other members of the team watch as the excavation of GG1 continues. Now below 111 feet, the shaft is yielding load after load of old wood, one particularly large beam (brought up from a depth of 113 feet) measuring five feet in length. Doug Crowell states that the beam was likely part of the Halifax Tunnel– a somewhat mysterious searcher tunnel constructed by the Halifax Company in 1866 or 1867. The narrator then suggests that perhaps the various artifacts discovered at depth in the area are all part of the Halifax Tunnel, located 200 feet south of the Money Pit, and that the team has not located the original diggings as they had hoped. The crew sinks the shaft to a depth of 159 feet before deciding to terminate the excavation.

While Billy Gerhardt begins to dismantle the crane pad at Smith’s Cove, the rest of the team meets in the War Room with theorist Richard Moats, a friend of the late Oak Island theorist Zena Halpern. Moats suggests that Nolan’s Cross “provides a means of relocating specific places on the island by using navigation principals along with markers that could not be changed by natural processes.” He further suggests that the cross was constructed by the Knights Templar before showing the treasure hunters a map of the Cross with several lines drawn through various stones. Moats believes that the intersections of these lines, one of which is located in the Money Pit area, are possible areas of interest. 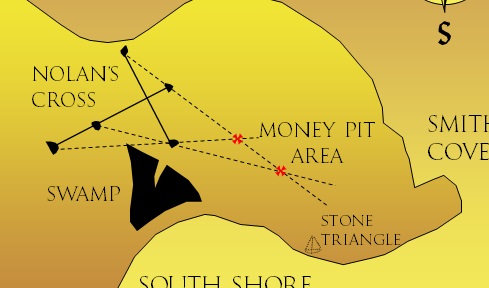 The areas of interest according to Richard Moates’ theory.

The next day, while Irving Equipment Ltd. commences the sinking of another shaft called Site 3 in the Money Pit area, various members of the Oak Island team head to Smith’s Cove. There, Billy Gerhardt shows them a trench he dug beneath the crane pad into which water is leaking from below. Rick Lagina examines the trench and discovers several wooden boards protruding from its side. Marty suggests that the board constitutes a previous treasure hunter’s attempt to staunch the Smith’s Cove flood tunnel. Gerhardt then expands the trench with his backhoe to reveal additional boards and more flowing water. “I think you’ve got your answer there,” remarks Gary Drayton. “The water’s running. They tried to stop the water.”

Meanwhile, Alex Lagina, Jack Begley, and Dan Henskee sift through pre-washed Site 3 spoils at a wash table. Jack Begley discovers a thin shard of pottery, which Henskee suggests might be a piece of a fine china teacup. Alex Lagina then comes across a fragment of purple wood, evoking the purple book spine unearthed from Borehole H8 in Season 5, Episode 7.

Later, the Lagina brothers and Craig Tester return to the Money Pit area, only to find the place quiet and deserted. They meet with Mike Jardine in an on-site trailer and learn that the crane operators are on strike, their union having decided to protest the wages stipulated by the Nova Scotia Construction Labour Relations Association. Jardine explains that the wage dispute is expected to be resolved within 21 days, and that work in the Money Pit area will necessarily be suspended until its resolution.  “We understand completely,” replies Marty Lagina. “We’ll just soldier through this. I think we ought to respect the workers’ rights here. So we’ll let this play out.”