The following is a plot summary and analysis of Season 7, Episode 15 of the History Channel’s TV series The Curse of Oak Island.

In light of Gary Drayton’s discovery of an iron bracket in the swamp in the previous episode, the Oak Island crew members return their attention towards the so-called Ship Anomaly, hoping once again that this feature might be the site of a buried ship. The narrator reveals that the depth of the Ship Anomaly is not uniform, with the northern end lying at a depth of 15 feet and the southern end lying at a depth of 55 feet. Accordingly, the crew decides to dig a fifteen-foot-deep exploratory trench at the Anomaly’s northern end. Several feet below the surface, they discovers an axe-cut wooden stake similar to those discovered in Season 7, Episode 11. 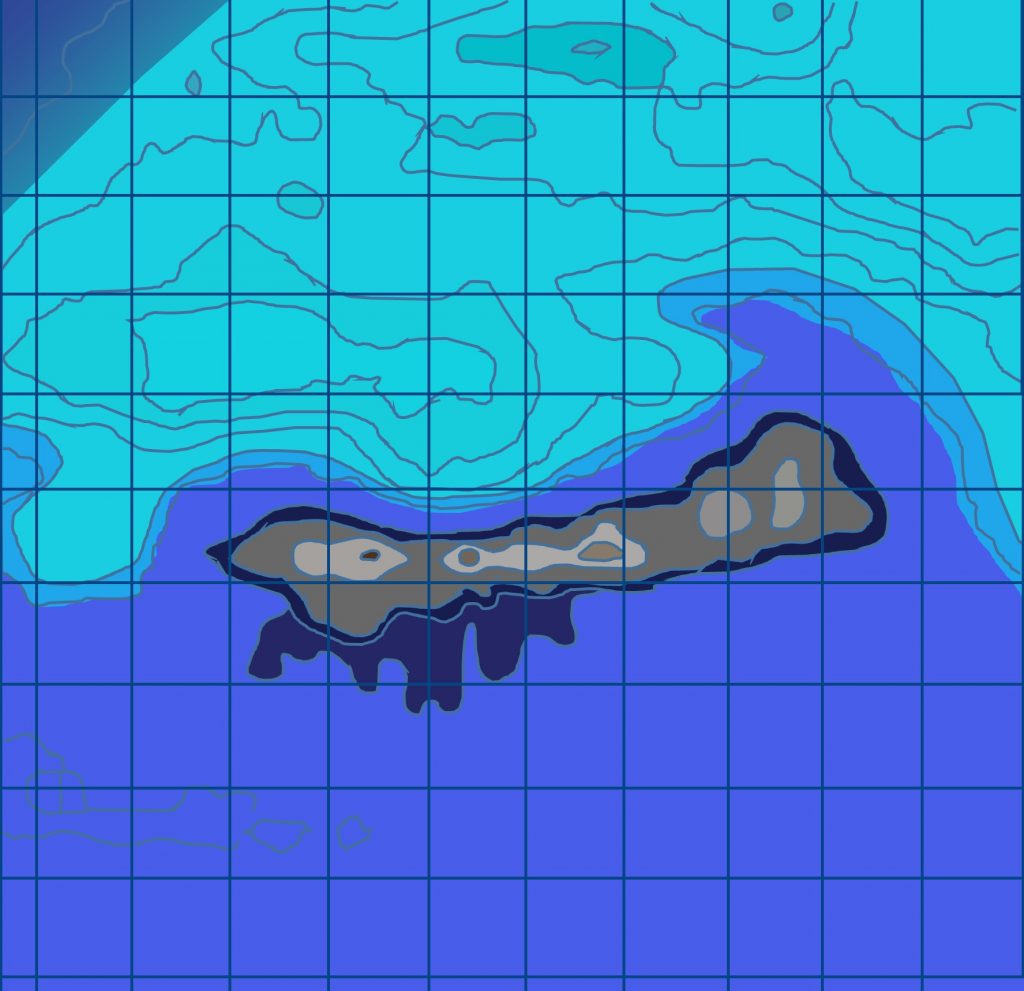 The ship anomaly in the Oak Island swamp.

Meanwhile, in Traverse City, Michigan, Marty Lagina and Craig Tester have a Skype meeting with Vanessa Lucido of ROC Equipment, during which they ask the CEO the dimensions of the largest caisson ROC is capable of sinking. Lucido replies that, although the previous custom-made caisson used on Oak Island throughout Seasons 5 and 6 measured 50 inches in diameter, the ROC oscillator is capable of handling 8-foot (96-inch) caissons. The treasure hunters arrange for Lucido to bring the larger caisson to Oak Island.

Back in the swamp, while heavy equipment operator Billy Gerhardt is busy digging the trench at the tip of the Ship Anomaly, Gary Drayton conducts a metal detecting operation in the surrounding area. He quickly comes across a metallic object buried beside a cone-shaped rock. This artifact proves to be a pointy metal cone in which a broken wooden dowel appears to be embedded. “Initially,” says Rick Lagina in a later interview, “it looked like a spear point… or a lance point, rather. But then we turn it about, and it appears hollow…” 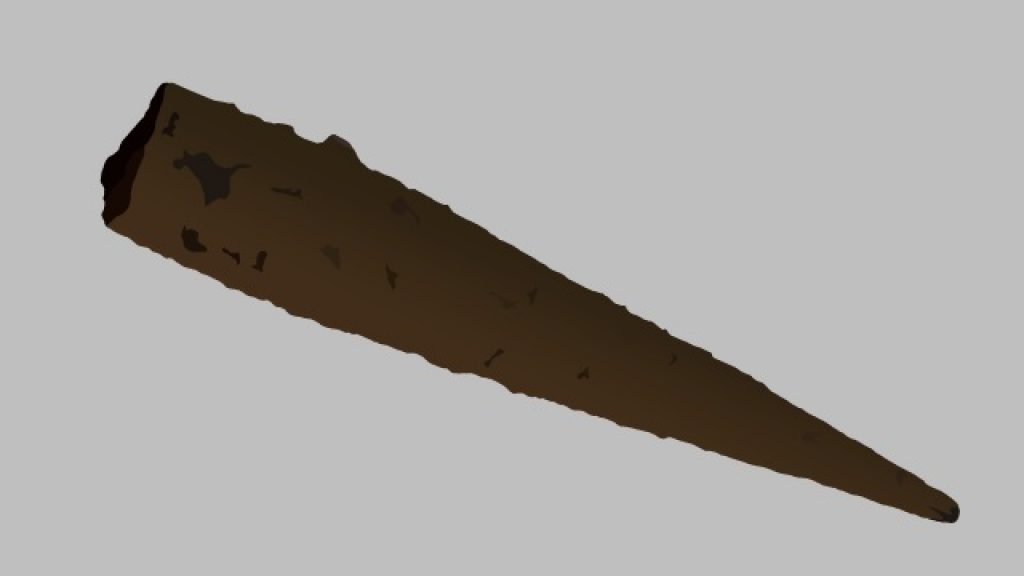 Meanwhile, Gerhardt is precluded from digging his trench to the planned depth of 15 feet due to the hardness of the clay. Fearful that they might damage their backhoe if they persist, the crew decides to terminate the operation.

That night, the crew congregates in the War Room, where they meet with author James McQuiston, who presented his Oak Island theory back in Season 6, Episode 20. In his previous War Room meeting with the Oak Island team, McQuiston had put forth the theory that members of the Knights Baronets of Nova Scotia- a 17th Century Scottish chivalric order associated with the short-lived Scottish colony of Nova Scotia- had buried the treasure of the Knights Templar on Oak Island sometime in the 1630s. In this episode, he expands on that theory by claiming that Sir William Alexander, the founder of the Nova Scotian colony, was the leader of a secret proto-Masonic society. “The bottom line,” he summarizes, “is that it’s more than apparent that the Scottish clan leaders who became the Knights Baronets of Nova Scotia had a lot of links to the Freemasons,” Freemasonic symbolism having been associated with a number of discoveries made on Oak Island over the past two centuries. McQuiston goes on to point out that John Smith, one of the co-discoverers of the Money Pit, was related to one James McLean, whom he claims succeeded William Alexander as the leader of aforementioned secret society. He further suggests that John Smith knew about the existence of the Money Pit through his connection to James McLean and deliberately searched for it on Oak Island. 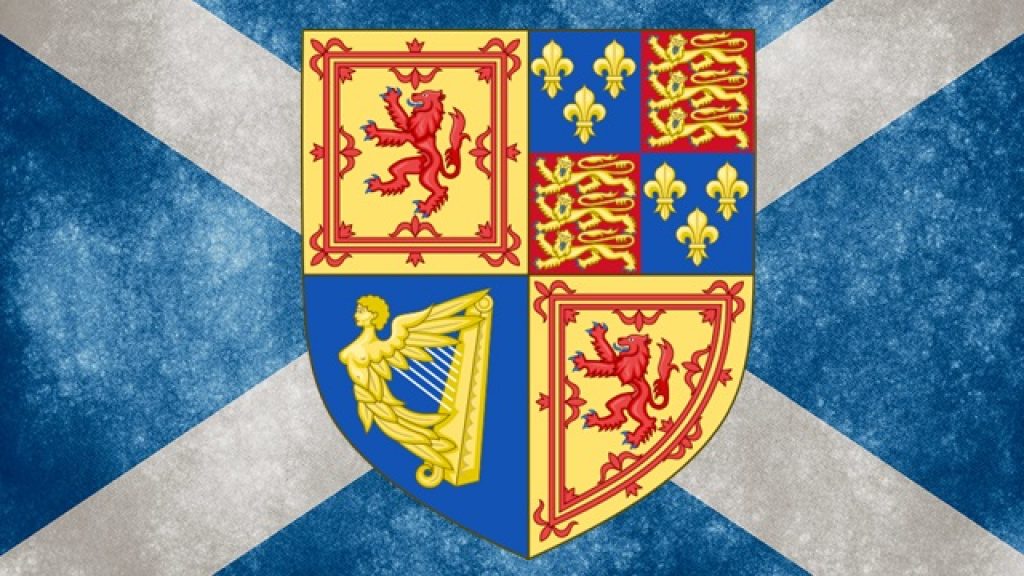 The next day, Marty Lagina, Charles Barkhouse, Laird Niven, Steve Guptill, and Peter Fornetti head to the foundation of the McGinnis family home on Oak Island’s Lot 21. The narrator informs us that the team has acquired a permit to excavate the anomalies surrounding the foundation, these anomalies having been discovered by GPR experts Steve Watson and Don Johnston back in Season 7, Episode 5. Under Niven’s direction, the treasure hunters use pins and string to mark off the locations of the test pits which they plan to dig and begin to excavate these sections with trowels. Each load of earth removed is then filtered on a sifting screen and minutely scrutinized. “Under Laird’s supervision,” Rick explains in a later interview, “we will conduct a proper archaeological dig of the foundation and the surrounding area…”

Later, Billy Gerhardt, Jack Begley, and Gary Drayton resume the excavation of the trench in the Uplands area between Smith’s Cove and the Money Pit area, in which several large timbers were discovered in the previous episode. They soon intersect what appears to be the collapsed remains of a wood-shored shaft or tunnel. Near the structure, Jack Begley discovers a wad of what appears to be coconut fibre. The treasure hunters find more of the substance nearby and collect it for future analysis. 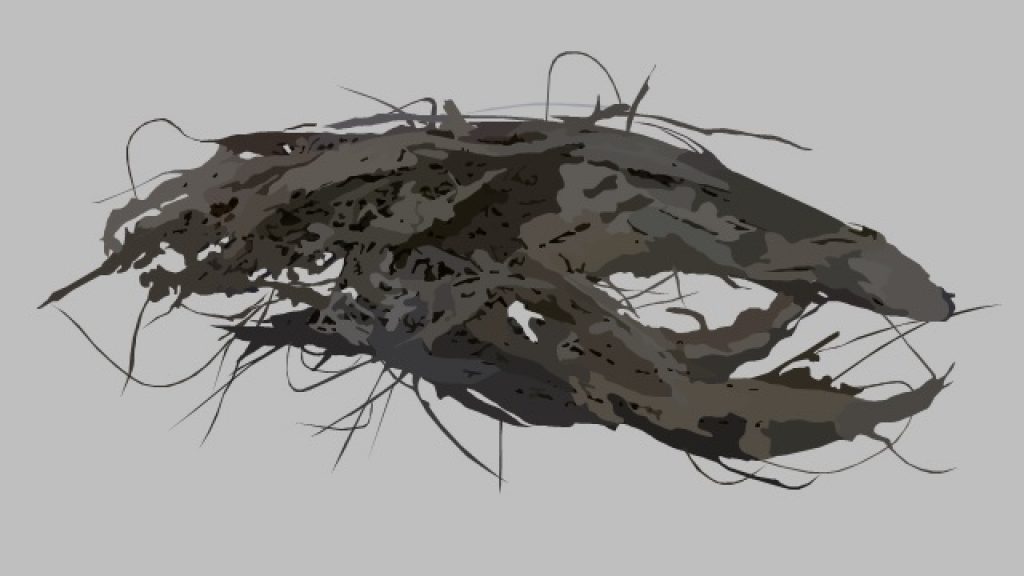 An interpretation of the coconut fibre found in the Uplands between Smith’s Cove and the Money Pit area. 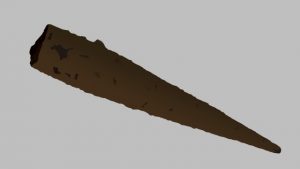 The next day, Marty Lagina, Alex Lagina, and Gary Drayton drive to the Ross Farm Museum in New Ross, Nova Scotia. There, they show blacksmithing expert Carmen Legge the conical metal object they discovered in the swamp near the northern tip of the Ship Anomaly. “Well,” says Legge while turning the object over in his hands, “it’s a hollow point. Two rivets on each side. Obviously it would have a wooden handle inserted in there and riveted into place.” After dating the artifact from 1710 to 1790, the blacksmithing expert identifies the object as the tip of a pike pole and declares that it must have come off a sailing ship. “I know that they use a lot of these on ships,” he explains, “to maneuver ships in really, really close spaces.” Following Legge’s analysis, some of the treasure hunters take the artifact as evidence of the theory that a ship, burnt or otherwise, lies interred within the Oak Island swamp. 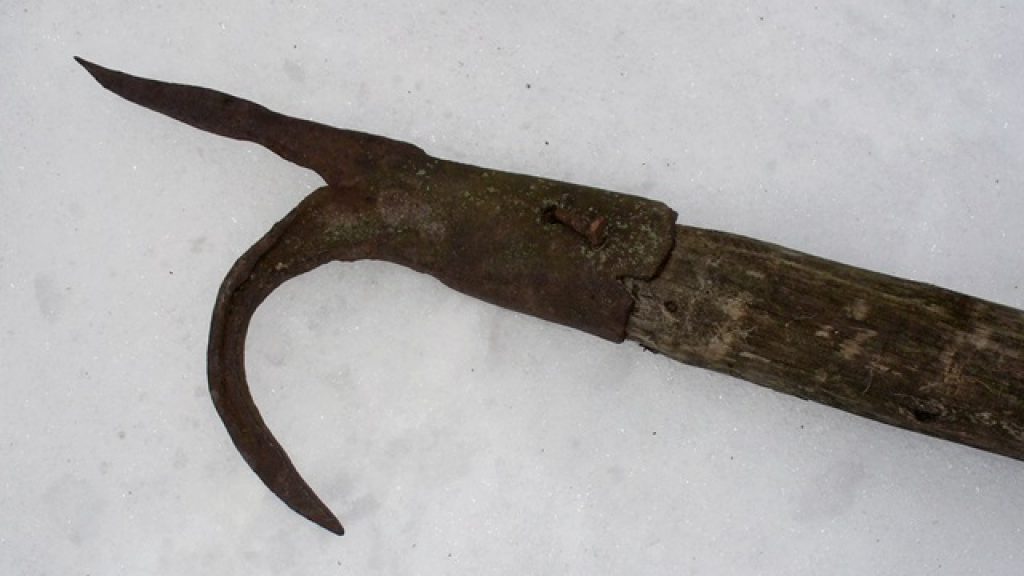 Following their meeting with Carmen Legge, the treasure hunters resume their excavation of the trench in the Uplands. While incrementally picking away at the recently-discovered wooden structure with his backhoe, Billy Gerhardt intersects a vein of water. Immediately, the trench begins to flood. The water flow quickly slows to a trickle, allowing the treasure hunters to examine the area from which the water erupted. Curiously, the water appears to have issued from the space between two large boulders which, as Jack Begley remarks, bear great resemblance to those discovered on Smith’s Cove in Season 6, Episode 10, which Doug Crowell suspected might be the remains of one of the box drains. Rick Lagina inserts the end of his shovel into the cavity and finds it to be oriented vertically, and to be deeper than the shaft of his spade. Jack Begley voices his opinion that the boulders might constitute the remains of the Smith’s Cove flood tunnel, and that the wooden structure nearby might constitute the remains of a searcher shaft called Shaft 5. The narrator then explains that Shaft 5 was sank by members of the Truro Company in the summer of 1850 about 100 feet from the Smith’s Cove beach for the purpose of intersecting the Smith’s Cove flood tunnel. At depth of about 35 feet, labourers had encountered a boulder. When they removed it, water began to flood the pit. The 19th Century treasure hunters, suspecting that they had indeed intersected the flood tunnel, promptly clogged the booby trap with clay and wood pilings before fruitlessly attempting to bail water from the Money Pit. 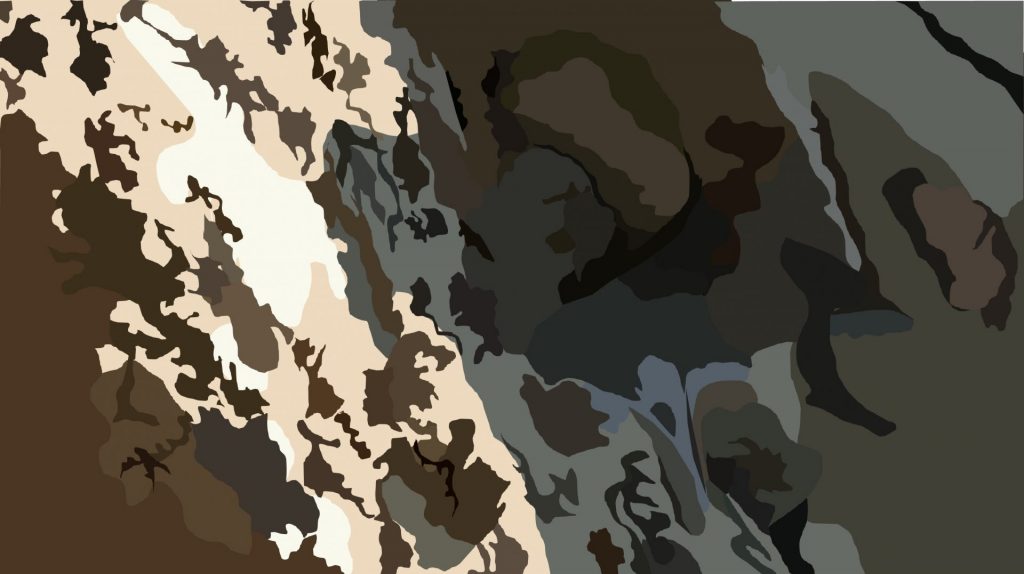 An interpretation of the gusher in the Uplands pit.

The next day, the Fellowship of the Dig meets in the War Room and calls up Dr. Ian Spooner, who has had a chance to examine the supposed coconut fibre found in the Uplands trench. The geoscientist confirms that the substance is indeed coconut fibre, as suspected.

In this episode, Gary Drayton discovered a conical metal object buried beside a cone-shaped rock near the northern tip of the Ship Anomaly in the Oak Island swamp. Embedded within the object was a broken wooden dowel held in place by two rivets. Later, blacksmithing expert Carmen Legge examined the artifact and identified it as the tip of a pike pole- a tool used maneuver large wooden objects- and dated it from 1710 to 1790, similar to the bracket found in the previous episode. He further opined that the object was used to finely maneuver a sailing ship, bolstering the theory that the remains of a ship lie buried in the swamp.

Near the end of this episode, members of the Oak Island team resumed the excavation of the trench in the Uplands area between Smith’s Cove and the Money Pit area which commenced at the end of the previous episode. The treasure hunters uncovered the remains of some sort of shaft or tunnel. Nearby, the came across several wads of what was later determined to be coconut fibre. Further below, they uncovered two large boulders between which issued a stream of water. Following that discovery, some of the treasure hunters theorized that the wooden timbers in the trench constitute the remains of Shaft 5- a shaft dug by members of the Truro Syndicate in 1850 for the purpose of intersecting the Smith’s Cove flood tunnel. At a depth of 35 feet, the Truro treasure hunters encountered a boulder which, when removed, allowed water from below to rise up and flood the shaft. Believing that they had indeed intersected the flood tunnel, they attempted to clog the supposed booby trap with clay and wood pilings. That accomplished, they tried to bail water from the Money Pit, but to no avail, leading some of the treasure hunters to believe that they had not completely plugged the flood tunnel, and others to suspect that there might be more than one flood tunnel feeding the Money Pit.

An interpretation of the gusher in the Uplands pit.

Thanks for watching! If you enjoyed this article and would like to help support this website, please check out our online bookstore: