The Curse of Oak Island- Season 7, Episode 17: To Boulderly Go

The Curse of Oak Island- Season 7, Episode 17: To Boulderly Go

The following is a plot summary and analysis of Season 7, Episode 17 of the History Channel’s TV series The Curse of Oak Island.

Rick Lagina takes Dr. Ian Spooner to the Eye of the Swamp, where a stack of boulders was uncovered at the end of the previous episode. As the geoscientist examines the feature, Rick remarks that formation bears great resemblance to the subterranean makeup of the so-called “Paved Wharf”, beneath which layers of large rocks were discovered in Season 7, Episode 12. Spooner concurs with his assessment, and concludes that the formation must be artificial. The treasure hunters are soon joined by Laird Niven, who observes that the feature resembles filled-in cellars that he has examined in the past. 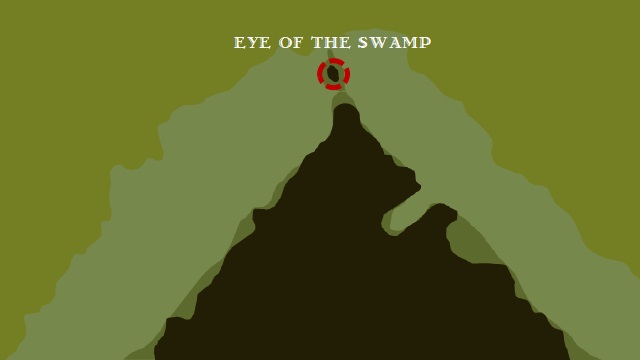 An interpretation of the Eye of the Swamp on Oak Island.

Meanwhile, at Mari Vineyards in Traverse City, Michigan, Marty Lagina has a video call with Mike Monahan of Irving Equipment Ltd. Marty reveals that Oak Island Tours Inc.’s cofferdam permit will expire in about a month, and asks Monahan whether Irving will be able to dismantle the cofferdam and restore Smith’s Cove to its original condition in accordance with provincial environmental law. Monahan replies that his team is capable of such an operation and will require three weeks to complete it. 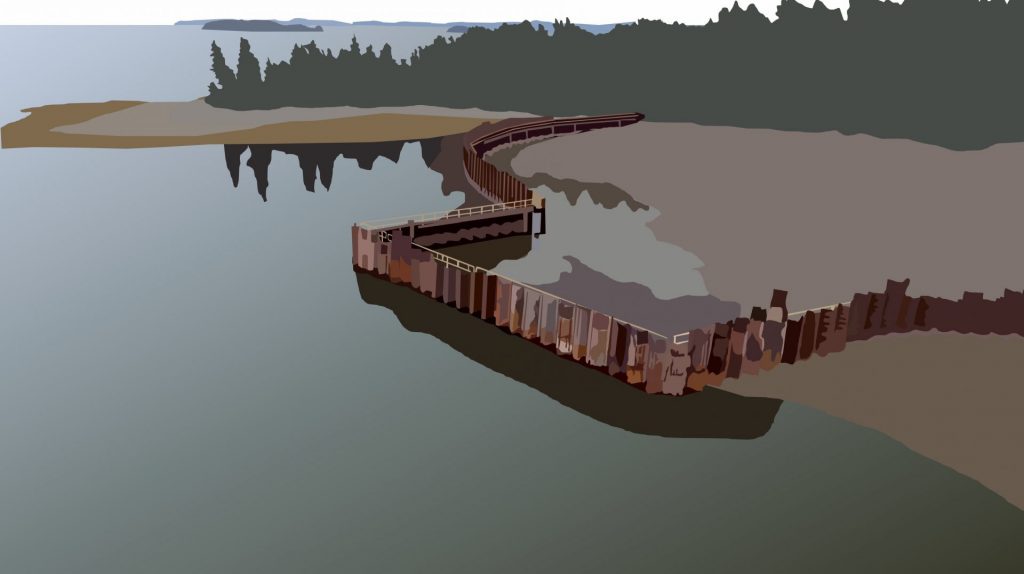 An interpretation of the cofferdam on Oak Island.

The next day, Billy Gerhardt, under Rick Lagina’s direction, reopens the Uplands pit abandoned the previous episode in the hopes of intersecting the Smith’s Cove flood tunnel. About six feet below the surface, Billy uncovers a handful of wooden planks and boards which Rick suggests might be the remains of a shaft wall, the shaft presumably being Shaft 5.

Later, Alex Lagina and Peter Fornetti head to Oak Island’s Lot 21, where Laird Niven and conservator Kelly Bourassa are busy digging archaeological trenches around the foundations of the McGinnis family cabin, in the areas where the GPR scan conducted in Season 7, Episode 5 indicated the presence of underground anomalies. Laird shows the cousins the remains of a stone wall which he discovered in one of the trenches, which old photographs indicate constitute the foundation of a shed. 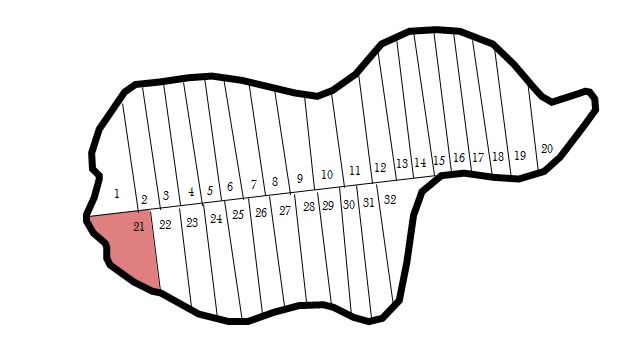 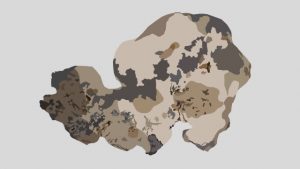 An interpretation of the lead glob discovered on the beach of Oak Island’s Lot 16 in Season 7, Episode 16.

That evening, the Fellowship of the Dig meets in the War Room to learn the results of a laser ablation test to which the lump of lead discovered on the beach of Lot 18 in the previous episode was subjected. The crew members call up geochemistry professor Dr. Chris McFarlane, who performed the test. McFarlane informs the team that the lead contains mercury and tin, and opines that the mercury must have been introduced after smelting. “Mercury is one of the most volatile elements,” he explains, “so if you heat it up to 8[00 or] 900 degrees to smelt it, the mercury would be gone. So it had to have been introduced by some other process. I’ve never seen anything like it, honestly.” Jack Begley then remarks that mercury features in Petter Amundsen’s Oak Island theory, presented back in Season 1, Episode 4, which contends that Elizabethan-Jacobean scientist and nobleman Sir Francis Bacon is the man behind the Oak Island mystery. Jack explains that, in his 1626 book Sylva Sylvarum, Bacon described a preservation technique in which the object to be preserved is dipped in mercury. Interestingly, a number of artifacts discovered on Oak Island over the years, including fragments of broken 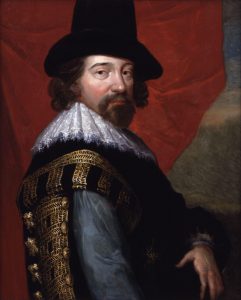 pottery found in 1937 on Joudrey’s Cove and a fragment of parchment brought up from the Money Pit area in 1897, are said to have borne traces of mercury. After Jack’s exposition, Dr. McFarlane, in response to a question from Doug Crowell, states that the artifact’s isotopic signature suggests that the lead was mined in the Greek mainland, the Aegean Islands, Cyprus, or Turkey. Gary Drayton remarks that each of the places that McFarlane mentioned were known to have been frequented by the Knights Templar.

The next day, Rick Lagina and Craig Tester head to the foundations of the McGinnis cabin on Lot 21, where Laird Niven is busy excavating by hand. The archaeologist shows the treasure hunters evidence of what he believes might be a trap door in the cellar. He also shows Rick and Craig a decorated bone handle of a knife which he discovered in the cellar area, which he dates to the latter half of the 18th Century. The narrator then informs us that Laird will be unable to excavate the foundations further without first acquiring another permit from the Nova Scotian government.

That afternoon, Rick Lagina and Terry Matheson stand by as Billy Gerhardt excavates the Uplands pit. Billy brings up several large timbers bearing notches which Terry observes appear to have been fashioned with an axe. Terry also notices a hole drilled in one of the notches, which he remarks bears great resemblance to drilled holes found in the U-Shaped structure.

When Billy Gerhardt uncovers potential evidence of a tunnel, Rick Lagina decides to examine the supposed structure with his own eyes. He climbs into the bucket of the excavator and Billy Gerhardt lowers him into the hole, much to the consternation of Terry Matheson, who expresses some concern that the hole could cave in. Rick is unable to tell whether truly constitutes a tunnel or not, and Billy brings him back to the surface.

The next day, Marty Lagina and Craig Tester join the rest of the crew at the Uplands pit. There, Rick Lagina shows his younger brother the notched and drilled beam recently recovered from the hole. Marty expresses his belief that the beam is at least two hundred years old and suggests that they have it dendrochronologically tested.

Billy Gerhardt proceeds to remove several more buckets of earth from the hole and hits what he believes to be a boulder. In order to verify the nature of the obstruction, Marty Lagina peers over the edge of the pit, secured to the surface by a rope and harness. Marty spies the opening of what he suspects might be an underground tunnel near the bottom of the hole. In order to get a better look at the feature, the treasure hunters attach a camera to the excavator bucket and lower it into the pit. The feature proves to be a large indentation in the side of the pit surrounded by planks running in all directions, apparently having been torn from their original positions by the excavator. Lodged in the middle of the cavity are what appear to be several large boulders. Marty expresses his opinion that the feature is indeed a tunnel.

That evening, the treasure hunters convene in the War Room, where they review the footage taken in the Uplands pit. Marty Lagina, Paul Troutman, and Billy Gerhardt all express their opinion that the aforementioned feature appears to be the remains of an underground tunnel. Marty remarks that a dendrochronological test of the wood removed from the pit will shed light on the nature of the structure.

The next day, Rick Lagina and Scott Barlow meet at Smith’s Cove with Mike Jardine of Irving Equipment Ltd. The treasure hunters watch as Jardine’s crew begins to dismantle the cofferdam, ending this season’s excavations at Smith’s Cove.

In this episode, Dr. Chris McFarlane of the University of New Brunswick released the results of the laser ablation test of the lead blob discovered on the beach of Oak Island’s Lot 18 in Season 7, Episode 16. McFarlane disclosed that the artifact contains significant quantities of tin and mercury, and postulated that the latter was somehow introduced after the ore from which the lead derives was smelted. He also opined that the ore from which the lead derives was likely mined on the Greek mainland, the Aegean Islands, Cyprus, or Turkey. 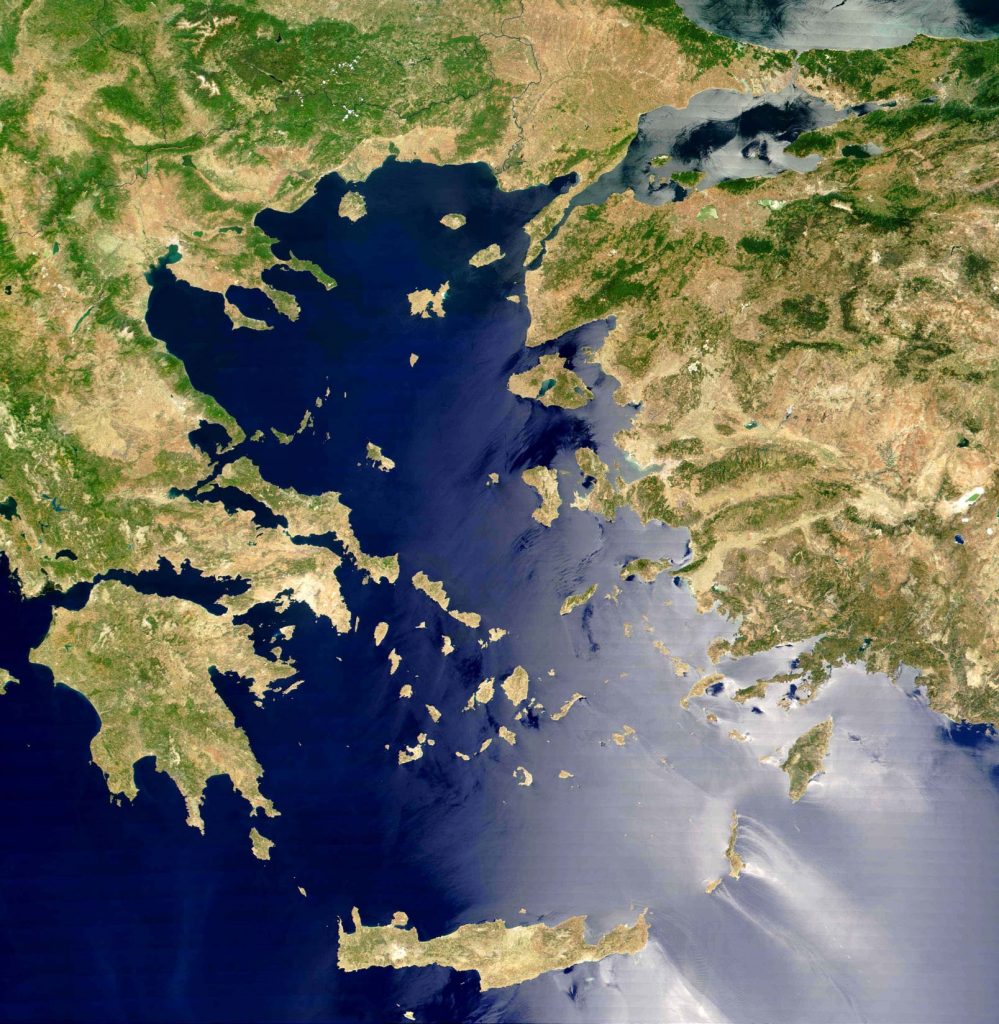 After learning the results of the laser ablation tests, Jack Begley remarked that the presence of mercury in the lead artifact evokes Petter Amundsen’s theory, mercury immersion being one of the conservational techniques described in the writings of Sir Francis Bacon, who features prominently in Amundsen’s theory.

The Tunnel in the Uplands Pit

In this episode, Oak Island Tours Inc. reopened the Uplands pit which was backfilled in the previous episode. In addition to unearthing a variety of timbers, one of them reminiscent of the U-Shaped structure, the crew discovered the remains of what appears to be an underground tunnel. Several crewmembers suggested that the feature might be the remains of the Smith’s Cove flood tunnel, and all agreed that a dendrochronological test of the timbers of which it is comprised is in order.

Thanks for reading! If you enjoyed this article and would like to help support this website, please check out our online bookstore: