The Curse of Oak Island- Season 7, Episode 4: The Lucky Thirteen

The Curse of Oak Island- Season 7, Episode 4: The Lucky Thirteen

The following is a plot summary of Season 7, Episode 4 of the History Channel’s TV series The Curse of Oak Island. 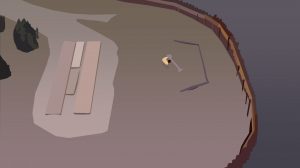 An interpretation of Smith’s Cove and its Upper Beach.

The episode begins at Smith’s Cove Upper Beach. There, Paul Troutman informs us that Choice Drilling has punched a second hole ten feet northwest of the hole drilled at the end of the previous episode, in which was discovered evidence of the dynamiting operation carried out by the Oak Island Treasure Company back in 1897. In a core sample taken from a depth of 50-53 feet in this new hole, which is dubbed OITC-6, Paul Troutman and Terry Matheson discover two pieces of wood separated by two feet of moist earth. The wood pieces appear to be fragments of hand-cut beams, leading Troutman to speculate that they might constitute the remains of some sort of underground tunnel. Matheson expands on Troutman’s theory by suggesting that the undisturbed quality of the earth above the wood, coupled with the fact that there are no documented tunnels in the area, may indicate that the wood is part of the Smith’s Cove flood tunnel. The treasure hunters call over Rick Lagina and inform him of the development. 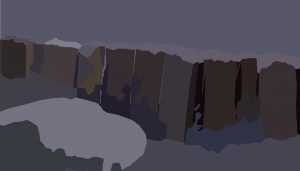 The Fellowship of the Dig then meets in the War Room, where Paul Troutman presents the recently discovered wood pieces to his fellow treasure hunters. Gary Drayton remarks that the wood bears some resemblance to that which comprises the slipway unearthed at Smith’s Cove the previous season. Steve Guptill then shows the crew a diagram depicting where OITC-6 lies in relation to other landmarks on Oak Island. Specifically, a line drawn from the drillhole to the centre of the U-shaped structure intersects one of the walls discovered at Smith’s Cove, which has been entitled “Wall 2”; and another wall closer to the U-shaped structure, which Billy Gerhardt discovered the previous season. When the line is extended westward, it runs through the Money Pit area. The team members conclude their meeting by agreeing to carbon date the wood discovered in OITC-6.

While the drilling operation continues at Smith’s Cove, Rick Lagina and Craig Tester meet with Tom Nolan in the War Room. There, they explain that they have identified three locations they would like to excavate in the Oak Island swamp, namely the Ship Anomaly, the Paved Wharf, and the so-called ‘Eye of the Swamp’. As talk turns to the swamp, Nolan informs his two companions that the swamp bottom has risen substantially over the past thirty years due to an accumulation of organic material. “What you’re walking on today isn’t what we were walking on back then,” he says, before recommending that the crew remove the top layer of the swamp before proceeding with any of their planned excavations. 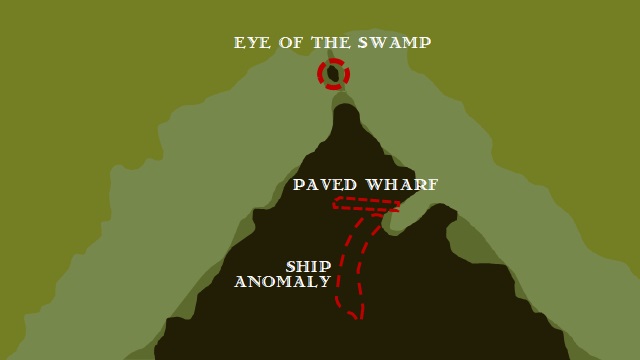 An interpretation of the three areas of interest in the Oak Island swamp.

Later, Rick and Marty Lagina and Steve Guptill meet with Jack Nichols of Dam-it-Dams, the contractor who constructed a successful inflatable cofferdam around Smith’s Cove back in Season 4, Episode 12. They inform Nichols that they would like him to dam off a section of the swamp so that they might be able excavate the three aforementioned areas of interest without having to contend with water. After touring the area in question, Nichols declares the task feasible and accepts the job. 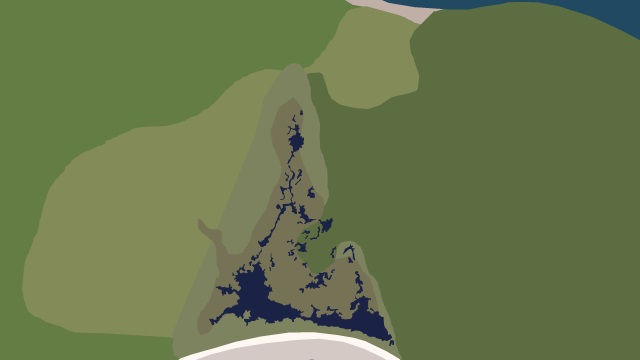 An interpretation of the swamp on Oak Island. 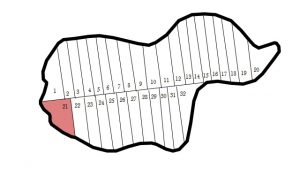 An interpretation of Oak Island’s Lot 21.

Meanwhile, Charles Barkhouse and Gary Drayton conduct a metal detecting operation on Oak Island’s Lot 21, where Drayton discovered the iron swage blocks in Season 7, Episode 2. The pair quickly discover a British copper halfpenny bearing the image of a young Queen Victoria- a feature indicating that the coin was probably struck in the 1840s or late 1830s. Shortly thereafter, west of the old McGinnis family cabin and not far from the shore, they unearth a decorative brooch bearing a fern-like design. The two men call up Rick Lagina and Doug Crowell to inform them of the find. When prompted by Rick, Drayton tentatively dates the artifact from 1500-1700. Crowell then ventures the opinion that the brooch might actually be a military cap badge similar to that which was found on the same Lot back in Season 6, Episode 5, prompting the narrator to remind us of the theory that the Money Pit was constructed by members of the Duc d’Anville Expedition of 1746. 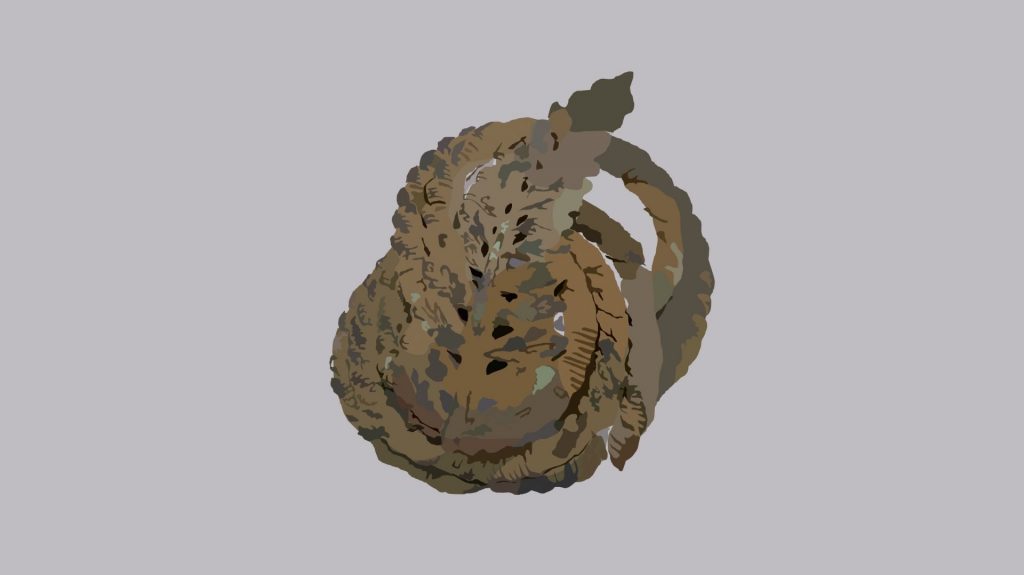 An interpretation of the rope and leaf brooch found on Oak Island’s Lot 21.

Later, Alex Lagina and Laird Niven drive to Acadia University in Wolfville, Nova Scotia, where they present the brooch-like object recently discovered on Lot 21 to conservator Kelly Bourassa. Bourassa proceeds to clean the object with a wooden skewer, a glass fibre brush, and a toothbrush, revealing a unique design consisting of twin coils of rope surmounted by a fern-like leaf. Bourassa suggests that the object, which indeed appears to be a brooch, has a Maritime flavour to it, but tells the two men that, despite the thorough cleaning he administered, he is still unsure of its age or maker. He also tells Alex and Laird that he has never seen another artifact like it. 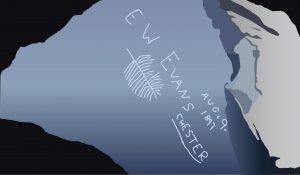 Following Alex and Laird’s return, the Fellowship of the Dig congregates at the Mug & Anchor Pub in Mahone Bay, where Alex presents the Oak Island team with the leaf brooch. Marty Lagina observes that the leaf on the brooch appears to have thirteen veins, evoking a tree-like symbol on the Evans stone and the tree on the Appeal to Heaven flag– symbols also associated with the number 13, which were introduced in the Season 6 finale. On Laird Niven’s suggestion, the crew agrees that they ought to continue to scour Lot 21, on which the brooch was found, in an archaeological manner.

The next day, the Oak Island team meets in the War Room, where Craig Tester presents the results of the carbon dating of the wood fragments discovered in Drillhole OITC-6. Tester tells the crew that the wood appears to date from 1735-1784- a date range which corresponds perfectly with the dendrochronological dating of the various structures found beneath Smith’s Cove throughout Season 6. All of the crew members, including an especially enthusiastic Jack Begley, agree that the carbon dating is very encouraging, and that they ought to thoroughly investigate the area surrounding OITC-6.

Thanks for reading! If you enjoyed this article and would like to help support this website, please check out The Oak Island Encyclopedia on Amazon.