The U190 joins the Royal Canadian Navy

In June 1945 a U-190 surrendered at Bay Bulls, Newfoundland.  It was officially commissioned into the Royal Canadian Navy. The ship was piloted from Bay Bulls, by Royal Navy Lt. Mewburn Philip Woods (pictured below in the circle) who resides in Halifax to this date. 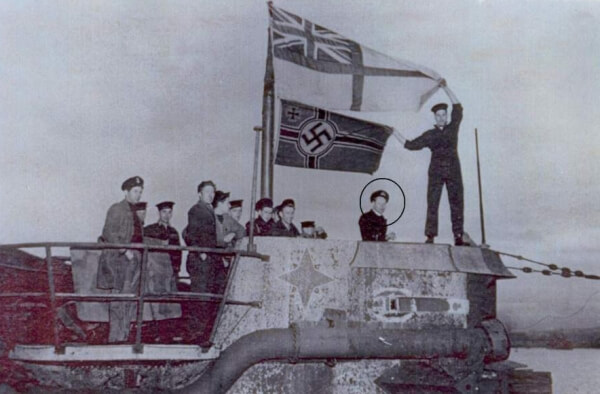 In the summer of 1945 the first duty of the U-190, as a vessel of the Royal Canadian Navy, was to take a ceremonial tour of communities along the St. Lawrence River.  The U-190 also visited The Gulf of St. Lawrence, with stops in Montreal, Trois Riviéres, Quebec City, Gaspé, Pictou, and Sydney. Back in Halifax it commenced duties as an anti-submarine training vessel.  It continued to fill this role until 24 July 1947.

Michael Hadley, in his book entitled “U-Boats Against Canada” described the end of the U190 this way:

“Operation Scuttled” marked paid to U-190s account. Touted on two occasions in the press as an exercise designed to train inexperienced post-war recruits in the art of combined operations. It was in fact a final touch of rather raffish theatre. Painted in bright red and yellow longitudinal stripes, the U-190 was towed to the spot where it had sunk the HMCS Esquimault.  At precisely 1100 hours on 21 October 1947 the tradition-bound RCN intended to celebrate Nelson’s “glorious” Trafalgar Day victory over the French fleet in 1805 by pounding the empty hulk into the depths. While the hapless “enemy” drifted, the “friendly” forces gathered for the kill: Tribal Class destroyers HMCS Nootka …, HMCS Haida …, and the Algerine minesweeper New Kiskeard [sic] …. The Naval Air Arm provided a collection of “string bag” aircraft: eight Seafires, eight Fireflies, two Ansons, and two Swordfish. The scenario, staged for twenty-four representatives of press and radio, called for a carefully choreographed sequence of battle escalating from airborne rocket attack to the grand finale of destroyer bombardment with 4.7 inch guns and a death blow with Hedgehog. The RCN’s final sally against a German U-Boat ended on much the same comic operatic note as its first foray against suspected invaders off Quebec City in 1939 …. Almost before the ships had a chance to enter the act, U-190 pointed its bow into the air after the first rocket attack and slipped silently beneath the sea – just 19 minutes after “Operation Scuttled” had begun.

The hulk of U-190 lies on the ocean floor somewhere near the hulk of its former prey, HMCS Esquimault. A fitting end to the story.

Or is that the end?  Has the U190 been located?  And what do the German feel about the treatment given to their U-boat?

The U190 joins the Royal Canadian Navy was last modified: January 27th, 2016 by Bruce Ricketts