Albert Johnson’s arrival in Fort MacPherson, July 9th 1931 on the southern edge of the Mackenzie delta (67 degrees N latitude) was by all accounts non-eventful. He was about 35 years of age, a very taciturn person with cold blue eyes coupled with a stocky muscular build. These physical characteristics in men that trapped for a living in the north were nothing out of the ordinary.  So how did he earn the name The Mad Trapper of Rat River?

What the local people considered strange, however, was the fact that Albert Johnson did not bother to get a trapping license even though he built an 8′ X 10′ cabin with a good view on 3 sides in a prime trapping site on the Rat River.

With the trapping season in full swing by early December 1931 some of Albert’s neighbors began having someone disrupt their traps. The only change from last season to this one – was Albert Johnson. On Dec. 31 Constable Alfred ‘Buns’ King and Special Constable Joe Bernard, each of whom had much northern experience, decided to call on Johnson to investigate. When they approached his cabin they noticed smoke billowing up from the chimney giving the impression that he was in the cabin. But Albert wasn’t in a talking mood.

After many attempts to strike up a conversation in 40 below temperatures and getting nowhere with a man holed up with a gun, they decided to return to Aklavik to get reinforcements.

They returned with 2 more Mounties plus one civilian. After the first knock on the door and without, warning suddenly a shot rang out wounding Constable King. A hasty retreat and a 20 hour dog sled ride back to Aklavik saved the life of the Constable.

On Jan 4, 1932, with 9 men, 42 dogs and 40 pounds of dynamite, a posse was determined to bring this fugitive in. Once their positions were secure on the cabin perimeter, the dynamite was thawed out by holding it under their coats close to their bodies.

The dynamite was thrown into the structure and a massive explosion ripped the roof clean off with one of the walls caving in.

As the Mounties entered the cabin to remove the corpse, Johnson stood up from a fox hole he dug firing 2 weapons narrowly missing both officers. A hasty retreat was in order again. After a 15 hr siege and food starting to run low they returned to Aklavik to contemplate their next move.

While all this was going on people in the rest of the continent were fixed to their radios listening to the first live reporting of a RCMP manhunt in Canada’s north as it occurred. The whole affair was now dubbed the Mad Trapper of Rat River.

A third patrol was dispatched on Jan 14. But this time Johnson had fled his cabin fortress. For 2 weeks in near 50 below zero weather and two blizzards Johnson evaded his captures.

On Jan 30th he was confronted once more. After a short shootout, Constable ‘Spike’ Millen lay dead – shot through the heart.  (There was no one around who had been through any type of nurse practitioner programs.)  Johnson made his escape by climbing a sheer cliff in the dead of night.

Albert Johnson seemed to be no average trapper. The Mounties said of him to be capable of great feats and crafty beyond belief. The local Inuit said at one point in the chase that Johnson could snowshoe 2 miles for every 1 mile a dog team had to break trail.

Johnson had been back tracking in ever larger circles for the past month to evade capture. At this time hundreds of men were now tracking him. He had guns but could not use them to hunt for food – they would give away his position. He had means to light a fire to cook what food he could snare but the fire again would aid his pursuers. He also had to build shelters in snow drifts, surely his clothes must have started to get wet from perspiration and/or the elements.

When and where could he build a fire large enough to dry his clothes out or eat properly to help ward off the effects of 50 below zero weather? A tantalizing question.

Now Johnson’s greatest feat was about to happen. Johnson could see that the Arctic Red River district was becoming to difficult to manage. His only avenue of escape was to traverse the Richardson mountains and head into the high country of the northern Yukon. The Mounties had already closed the door on that idea by guarding the only two passes through this range. But the quick thinking Johnson pulled another fast one on the Mounties.

During a raging blizzard he climbed over these 7,000 ft mountains with very little food and no climbing gear. With visibility during the blizzard at near zero, trying to cling to sheer cliffs of slippery ice and numbing cold, the mountain men of the area told the Mounties it would be impossible to do at this time of the year even with the proper gear and food.

A native trapper traveling through one of the guarded passes told of strange tracks on the upper reaches of the Eagle River, Yukon. Assuming that this could be Johnson on the other side of mountains, the Mounties knew they were no match in overtaking this fugitive.

In a Canadian first, on Feb 7, 1932 a monoplane piloted by W.R. (Wop) May was pressed into service to aid in the search to finally corner Johnson.

On February 17, 1932 May directed the Mounties to a hairpin turn in the middle section of the Eagle River where a gun battle eventually brought Johnson down. It took 9 bullets to Johnson’s body to finally end this 5 week ordeal.

Where did he come from (his finger prints were no help)? No family member ever claimed the body. Before entering the Arctic River area no one had ever heard of him. During the entire man hunt the Mounties never heard him speak a word. And yet he had over $2,000 in cash and some placer gold in his possession.

The story of Albert Johnson is truly a Canadian Mystery that still beckons to be solved.

Ed note:  You can visit the grave of the Albert Johnson The Mad Trapper in Aklavik, NWT. 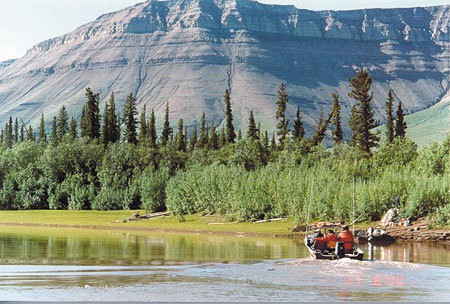 Article Name
Albert Johnson - The Mad Trapper of Rat River
Description
With the trapping season in full swing by early December 1931 some of Albert Johnson's neighbors began having someone disrupt their traps.
Author
Bruce Ricketts
Publisher Name
Mysteries of Canada