The events recorded in this strange Mystery occurred between 1830 and 1840. This all happened within a few kilometers of WALLACEBURG, Ontario.

A young man named Mr. John McDonald had acquired a piece of land which was coveted by other people.  These “others”, headed by an old woman, approached John many times with offers to buy the land.  He firmly refused their offers.

And so the mystery of the Baldoon begins:

One day, as some young women of the McDonald family were talking and working in the barn on the farm, they were startled by a sudden fall of a pole from the ceiling.  The incident was attributed to a natural cause and ignored.  Some time later a second pole came crashing down.  They looked around but could find nothing to explain the occurrence.  They went back to their work.  A short while later a third pole crashed down to the floor almost hitting them.  This time, very frightened, they ran out of the barn and straight into the house.

From that time on it was total misery for the McDonald family as strange things started happening on the farm.

The family began to hear strangers marching through their kitchen in the middle of the night.  Unseen persons  threw bullets and stones through windows daily until every window in the house were broken and had to be boarded up.  A man who was visiting the McDonald’s witnessed an occurrence.  He was standing in the kitchen and was hit in the chest by a stone.  The visitor picked up the stone and threw it into the river. Minutes later the same stone mysteriously dropped at his feet in the kitchen. Fires would start mysteriously all over the house, even on the roof.

A friend of the McDonald’s told them of a woman who was gifted, she had a power of stone reading. They traveled many miles to see this woman.

They told the woman every detail of their story.  She asked if they had seen a strange bird around.  They said yes, they had seen a goose with a black head.  The woman told them to make a bullet out of silver and shoot the bird.  If they wound the bird their enemy would be wounded also.  They went home and did exactly what the woman told them to do.

One morning McDonald took a brisk walk that brought him to the river bank.  He spotted a flock of geese and identified the one with the black head.  He aimed.  He shot!  The bird cried.  McDonald had hit the bird in the wing and broken it.

Leaving the goose with the black head, McDonald walked to the house of the old woman who wanted to buy his land.  She was sitting on her front porch in her rocking chair with a broken arm!

From the time that the bird was shot and the old woman was wounded, no spiritual manifestations were ever heard of at the McDonald farm and peace again fell on the Baldoon.

Note:  Kristeena lives about 2 kilometers from where this mystery was said to have taken place. 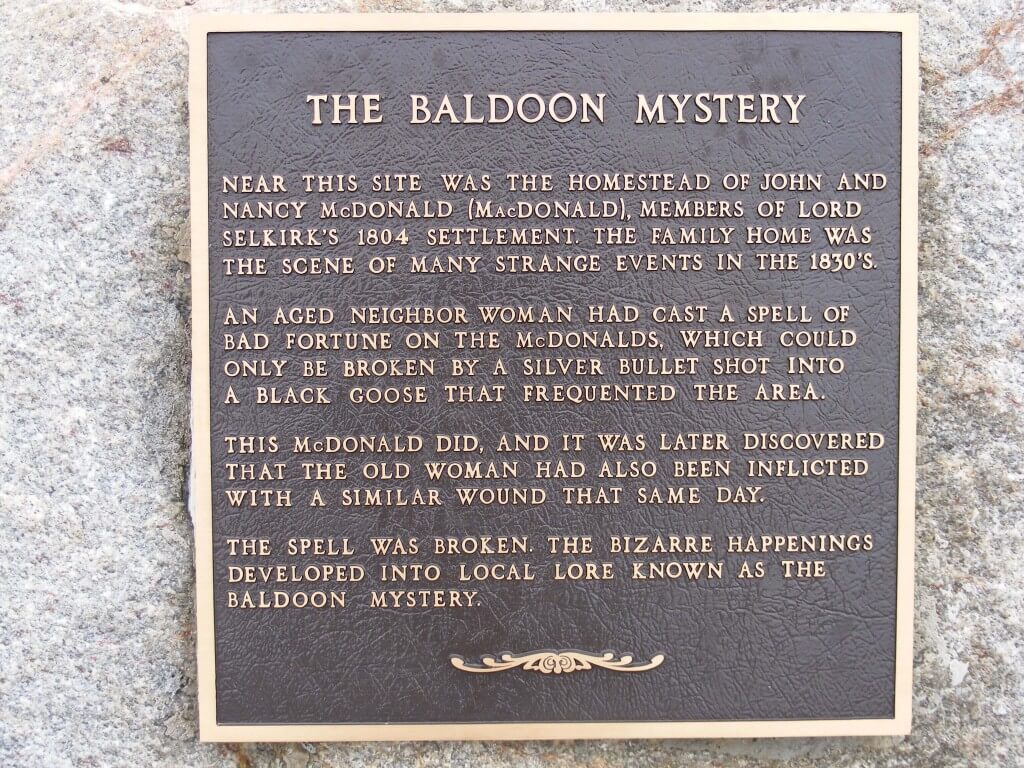 Article Name
The Baldoon Mystery
Description
From the time that the bird was shot and the woman was wounded, no spiritual manifestations were heard of at the McDonald farm and peace fell on the Baldoon.
Author
Kristeena Natili
Publisher Name
Mysteries of Canada