Born in a family of rather modest means, Whitton grew to become the first female mayor of the City of Ottawa, a tireless defender of the less fortunate and a relentless crusader for professional standards of juvenile immigrants and neglected children. She was the driving force behind the Canadian Council on Child Welfare and was in high demand, across North America, as a lecturer on social programs. Charlotte Whitton was a study in the modern woman.

She attended Queen’s University, where she studied for a Master of Arts and played hockey.In November 1950, she entered Ottawa municipal politics winning a seat on the Board of Control (now city council).  The newly elected Mayor of Ottawa, Grenville Goodwin, died in office and Whitton was appointed to succeed him for the remaining 14 months of the mandate.  She was elected mayor in 1952, 1954, 1960 and 1964 and later served as an alderman until 1972.

While Whitton was a power house in social welfare and politics she is best known for her immortal quote:
Whatever women do they must do twice as well as men to be thought half as good. Luckily, this is not difficult.

She was also the author of lesser-known, but still great, quotes such as:

“Turn your face to the sun and the shadows fall behind you.”

“It’s how you deal with failure that determines how you achieve success.”

Charlotte Whitton did not shy away from controversy.  During the Flag Debate in 1964 she confronted Lester Pearson over his choice of three maple leafs for the flag.

For Whitton, the Red Ensign, with its Union Jack and coat of arms containing symbols of England, Scotland, Ireland and France (or a similar flag with traditional symbols on it) would be a stronger embodiment of the Canadian achievement in peace and war.  She lost the battle but made her mark. 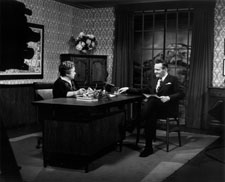 During her time as Mayor she pioneered the communications of city politics by hosting her own TV program and writing a column in the local paper.

Never married, Whitton lived for 32 years with her companion, Margaret Grier, whom she had met at Queen’s University.  Grier died in 1947 at the age of 55 years.

Charlotte Whitton died on January 25, 1975 and was laid to rest in the Thompson Hill Cemetery in Renfrew. 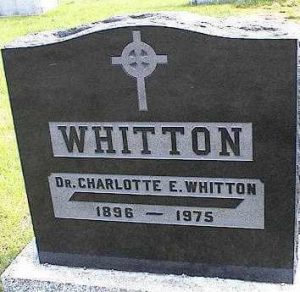 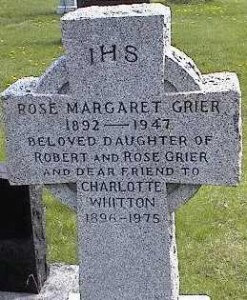 […] the 1970s, another woman, Charlotte Whitton, the first Canadian female mayor summarised the situation women faced: “Whatever women do they […]

[…] the 1970s, another woman, Charlotte Whitton, the first Canadian female mayor summarised the situation women faced: “Whatever women do they […]