For the purposes of this story let’s assume that a hovercraft is a boat that can move across land or water.  OK? In that case, Canada’s first hovercraft was an Alligator. 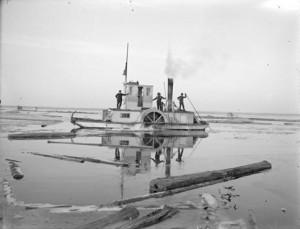 In the later part of the 19th century and into the 20th century, the loggers in and around what is now known as Algonquin Park used a very special tugboat to corral logs on water and drag them across the lakes to the mills and shipping locations.  The boats were called Alligators.  Why?  Because, like alligators, they were capable of navigating both on water and on land.

A boat on land?  Isn’t that normally called a shipwreck or, at least, winter storage?

The Alligator was a flat bottom side-paddle wheeler that could travel, in still water, about 5-6 miles per hour.  However if the wind came on to strong or the current was against the bow, the boat would slow from a crawl to stopped.  So the boat designer came up with an ingenious way to keep it moving.  They had a row bow go ahead of the Alligator about a quarter mile and drop an anchor which was attached to a winch on the Alligator. When the anchor was set, the cable would be winched in and the Alligator would move forward.  This worked very well on water so the boatmen decided to try it on land.  Logs were laid down across an area to portage, the anchor was played out, the winch activated and the Alligator Boat was pulled across the logs, thus navigating the portage. 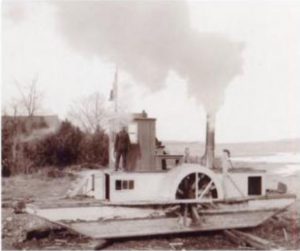 Thus, the Alligator Tug could move through the water and across the land… just like a hovercraft. 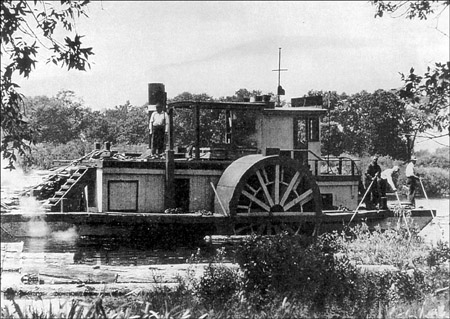 There are remnants of Alligators through the Algonquin Park area.