In Prince Edward County there is a ferry which connects two parts of highway 33.  The Glenora Ferry runs every 15 minutes or so between a flat peninsula at the eastern end to the side of a cliff on the west.  What most ferry passengers do not realize is that they reach the western shore, they are within throwing distance of a lost treasure. Rumor has it that there is a cave some 50 feet from the top, which can only be reached by a narrow path along the face of the cliff. 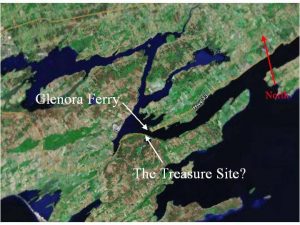 The Seven Years War was fought in many parts of the new world in the mid-eighteenth century, between the English and the French.  Some more famous battles included the siege of Louisburg, in Nova Scotia and a lesser known skirmish between two Generals named Wolfe and Montcalm on the Plains of Abraham.

In or about the year of 1759, a French admiral watched from a cave above what is today the Glenora Ferry, while the British and French fleets fought one of the last marine battles of the war.  Fearing defeat, the admiral hid all his treasure in the room-sized cave and sealed the small entrance to it.

There is no record to suggest that the admiral ever returned to reclaim the Glenora Treasure.

Is the Glenora Treasure still waiting somewhere high up on the cliff?