Do you remember the day that Fenton Hardy and his two sons, Joe and Frank, were walking with Aunt Gertrude and Chet Morton down the side-walk in downtown Haileybury, Ontario?  Twig your memory?  They were on their way to the post office to send in another manuscript for publishing.  It was a sunny day in June of 1940.  They had made that walk to the post office regularly for almost 13 years.  And they would continue to make it for 6 more years. Perhaps you would remember the event if I told you that those people were actually one person and the name of that person was Leslie McFarlane. 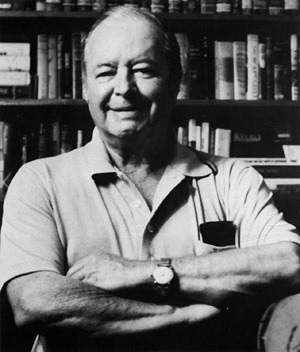 But wait a second, those names – Frank, Joe and Fenton Hardy – they ring a bell!

OK, I will give you another hint.  Leslie McFarlane may have carried the manuscript to the post office but the writer’s  name on the manuscript was, in fact, Franklin W. Dixon.

Did you solve the mystery?  It might have been called “The Mystery of the Phantom Author”.  Give up?

Leslie McFarlane was the ghost writer of most of the famous Hardy Boys Books series.  Joe, Frank, Fenton, Aunt Gertrude and Chet Morton were all created in his fertile mind.

Leslie McFarlane was born on October 25, 1902, at Carleton Place, Ontario, one of 4 sons of the local school principal.  His father, John McFarlane, decided to accept the position of principal at Haileybury Public School in 1910 and off they went.

Leslie’s growing up years were not unusual.  He loved hockey and sledding down the big hill of Browning Street with his friends. He was a voracious reader who, when he finished his copy of Chums or The Boy’s Own Annual, would dive into his father’s extensive collection of books.

At the age of 14, McFarlane entered high school.  He held a series of part-time jobs over the next few years that would put him on the path toward fame and fortune (well at least fame!).  At various times he delivered the Saturday Evening Post, ran errands as a junior bank clerk, operated the projector at the Grand Theatre and set type at The Haileyburian newspaper.  In 1915 he won an I.O.D.E award for historical writing.  At the age of 19, he was awarded second place in a provincial writing contest for his work entitled “Afraid“.

After graduation McFarlane took a job as a reporter for the Cobalt Daily Nugget for $8/per week.  He lasted about one year and moved on to the Sudbury Star where he worked for a whopping $25/week.  It took him another year to realize that the demanding life of a newspaper reporter was not his bag of cookies.  He quit.

McFarlane moved outside of Sudbury to a cottage on Ramsay Lake to begin his life as a freelance writer.  His big break came out of tragedy in his home town of Haileybury.  On October 4, 1922, a great fire engulfed much of the Temiskaming District and virtually obliterated Haileybury.  His mother fled to North Bay, as did many of the residents of the town.  He joined her there and listened with great interest to the stories of the fire and the destruction it wrought.  The story he wrote, based on these descriptions, was submitted to the Sudbury Star and ran as the headline story. 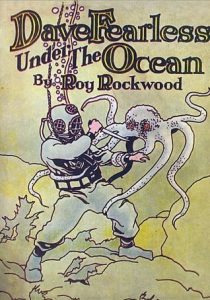 In 1926, after have published a few articles and features for the Toronto Star Weekly, he headed south of the border to work for the Springfield Republican newspaper in Springfield, Massachusetts.  While reporting the city beat for the Republican, he responded to an advertisement from Edward Stratemeyer, an author and publisher of children’s books.  Stratemeyer sent McFarlane a copy of one of his Dave Fearless Series, a series of mystery novel he had penned under the name Roy Rockwood.

McFarlane was, at first, shocked that Stratemeyer would write under a pen name but slowly he came to understand the logic.  It allowed more than one writer to pen novels in a series without disturbing the series.  Roy Rockwood was the nom de plum used by a syndicate of writers.

McFarlane was soon ghostwriting under the name of Roy Rockwood.  His first book was entitled “Dave Fearless under the Ocean“, for which he was paid the princely sum of $100.

McFarlane wrote a total of seven Dave Fearless novels before he informed Stratemeyer that he was tired of the character.  Stratemeyer wrote him back with an idea for a new mystery series specifically written to appeal to young teenagers.  “How about writing the Hardy Boys Mysteries?” 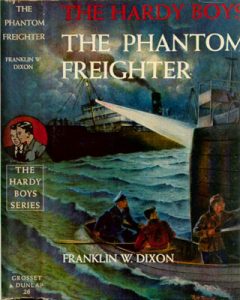 That was beginning of the most famous young boys mystery series ever written.  Millions of copies have been read by tens of millions of kids in over 20 different languages around the world.  He continued to write about Frank and Joe until 1946, when he penned his last in the series entitled “The Phantom Freighter“.

In 1943, while writing the Hardy Boys, McFarlane was employed by the National Film Board of Canada.  Ten years later, in 1953, he was nominated for an Academy Award for his documentary Herring Hunt.  Shortly thereafter, following the death of his wife, he moved with his three children, Patricia, Brian and Noah, to Toronto to work on documentaries and comedies at the CBC.  He had a short stint in Hollywood as a writer on the famous western TV show, Bonanza, which starred fellow Canadian, Lorne Green. 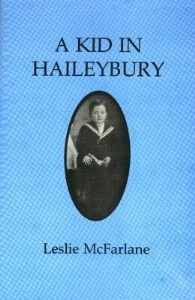 A Kid in Haileybury

But his heart lay in Canada, where he returned to write even more novels, but now under his own name.  Novels such as, A kid of Haileybury and, in 1976, his autobiography, The Ghost of the Hardy Boys.

On September 6, 1977, after a lengthy illness at the Oshawa General Hospital, 74-year-old Charles Leslie McFarlane passed away.  The nation and all young boys mourned the loss of a great writer and a friend.

His son Brian, the same Brian McFarlane of CBC’s Hockey Night in Canada,  remembers the day, at the age of 10, that he learned that his father was Franklin W. Dixon, the writer of the Hardy Boys.  “It was like finding out your dad was Santa Claus”.

I think we all would have liked to have been in young Brian’s slippers.

The Hardy Boys who was Leslie McFarlane was last modified: February 4th, 2017 by Bruce Ricketts
Summary

One Response to “The Hardy Boys who was Leslie McFarlane”

Where may I obtain the original Hardy Boys books, written by Leslie McFarlane, published in facsimile format, by Applewood Books in 1991?