Watson’s Mill is a beautiful old building on the Rideau River in Manotick, a suburb of Ottawa.  Built by Moss Kent Dickinson and his business partner Joseph Merrill Currier in 1860, the mill used big water turbines to run large millstones to grind wheat into flour. Vermont-born Joseph Currier, was born in 1820.  He did not have a lot of luck in his life.  Joseph’s first wife died in 1858, and his three children from that marriage all died within five days of each other in 1855. 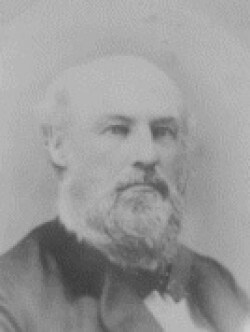 In August of 1860, a rebounding Joseph Currier traveled south to Lake George, New York where he stayed for a time at the Crosbyside Hotel.  The Crosbyside was run by the family of Ann Elizabeth Crosby.  Anne was born in 1841 and was described as “tall and beautiful”.  Joseph and Anne were married on January 25th, 1861.

After spending a month-long honeymoon traveling throughout the Northern United States, Joseph Currier brought his new bride back to Manotick to celebrate the first anniversary of his Mill.  Anne did not have the benefit of a technical school education, otherwise she would have known that moving machine parts and long or loose clothing do not mix.  While viewing the works of the machinery on the second floor, Ann’s white crinoline dress became caught in the revolving turbine shaft.  She was thrown against a nearby support pillars and killed instantly. 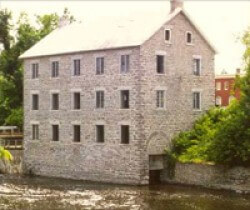 Needless to say, Joseph was a bit shaken by the tragedy.  He sold his share of the mill to his partner Dickinson and never set foot, in Manotick or Watson’s’ Mill.

Anne’s body was buried back in Beechwood Cemetery in Ottawa but her spirit continued to live at Watson’s Mill.  Anne stayed around to haunt the place even to this day.

It is said that you can still see blood stains and fingernail marks on the post that Anne’s body struck.  People feel cold air streams and get goosebumps even on some of the hottest days of the summer.

It is also said that Anne takes some time off from her haunting of the mill to visit the place that Joseph went after Anne’s death.  She has been seen wandering around Parliament Hill and the canal locks nearby.  Why would she go there?

After Anne’s death, Joseph moved on in life as both a Member of Parliament in the emerging country of Canada and as a builder.  In 1866 he built a new stone house overlooking the Ottawa River.  He called the home, “Gorffwysfa,” a Welsh word for place of peace.  He made the home a gift to his third wife, Hannah.  The home is now called “24 Sussex”.  Gorffwysfa was bought by the government in 1943 and became the official residence for all Prime Ministers of Canada in 1951.

Joseph Merrill Currier died in 1884 and was buried right next to Anne at Beechwood Cemetery.