HomeOntarioSir Isaac Brock and the Duel

General Sir Isaac Brock was a great General who had experience in several theaters of war in Europe including the Battle of Trafalgar along side Horatio Nelson. He was a brave, decent officer who personified the word “gentleman”.  Brock is commemorated for his ride to Queenston heights to drive the Americans back across the river.  His untimely death was the result of a musket ball fired by an American sharpshooter.Seldom are our school children taught about Brock’s duel when he was stationed in Barbados.  Here is the story of another lead ball that could have ended Brock’s life some years before he came to Canada.Brock was present in the Garrison Officers Mess in Bridgetown, Barbados, when a fellow Captain (and a renowned “Rake”) insulted a lady.  Brock came to her defense and a challenge to a duel was given.  Brock was given the choice of weapons and chose pistols.  His Second was appalled with this choice and advised Brock that “the Rake was an expert pistol shot and had already killed three others in duels.”  Brock was a below averages shot with a pistol, but refused to change to sabers in defense of the lady’s honor. 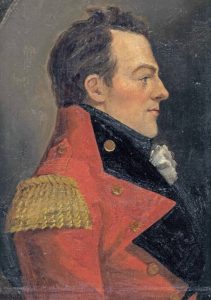 On the morning of the duel, the adversaries met on the field of honor.  The Seconds loaded and primed two matching dueling pistols.  The first selection of pistol belonged to the Rake.  His choice made and the weapons checked, the Rake asked of Brock; “and sir how many paces would you like to take before you die?”  Brock reached inside his tunic and drew out a handkerchief.  Holding it by the corner and towards the Rake, Brock said, “Hold the other corner.”

The Rake lost his nerve, and, as the coward he really was, left the field of honor, and then the military, in disgrace.